The intern team at Boca bearings is always busy turning out new and creative ways to showcase our bearings, as such we are always looking for ways to build upon our past experiences and leverage those skills to new projects. With that said, I am pleased to announce our newest project, the Boca Bearings Racing Mower. This project is designed to showcase just how much power you can get out of an everyday riding lawn mower with a few modifications and some high performance bearings.  Watch our video here!

As many of you are probably wondering what on earth a racing lawn mower is, here is a crash course in the concept.

Lawn mower racing came about in the 1960’s and 70’s as a cheaper alternative to stock car racing where your average Joe could go out with a mower, a few tools and a little ingenuity and build a machine to take out on the weekends and race against your buddies without having to invest tens of thousands of dollars into a race car. While your average stock mower would be lucky to hit 6mph, these machines are structured in such a way that they can hit 50mph with relative ease and 80mph not being unheard of. Currently the world record for fastest racing mower is held by Honda where their custom built machine clocked 116mph. To achieve these kinds of speeds three main things are done, swapping pulleys on the belt drive system to give a preference to speed over torque, lowering the mower to drop the center of gravity, and removing the governor to squeeze the full amount of power from the engine. There are other things that can be done to give smaller performance gains but those will be covered in later blogs.

For our platform we will be using two interchangeable engines on the same frame to allow us to compete in different race classes with this mower at the NASGRASS league here in Florida as some classes require a single cylinder engine and others require a V-Twin to compete. To achieve, this we had to carefully select our mower platform to insure inter-compatibility between engines as well as a mower that either had an automatic or hydrostatic transmission, as shifting gears on mowers while in motion can cause issues and inefficient power bands.

In our research we found that there are two main engine brands that are commonly used in consumer mowers Kohler and Briggs & Stratton. Of these two Kohler is arguably the better brand for long term stock dependability these days, however it isn’t by much and aftermarket performance parts for Briggs & Stratton engines are significantly easier to source. With this in mind we decided to go with a Briggs & Stratton platform. And after shopping around we found a used John Deere LA115 with a new single cylinder 33R877 engine in it that fit the bill perfectly and was equipped with a hydrostatic transmission. 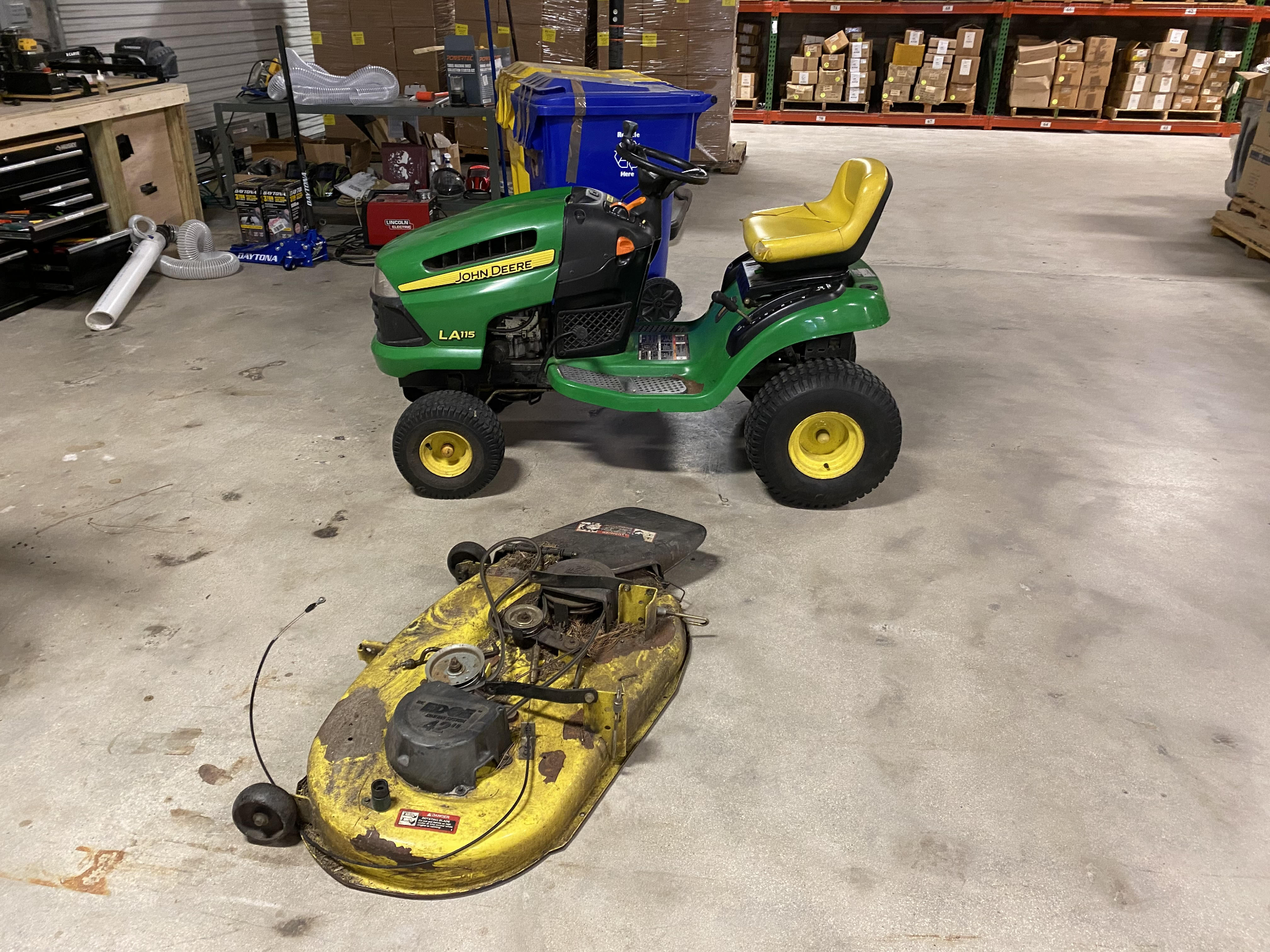 As many of you may have never heard of a hydrostatic transmission or have and don’t know what makes it so special, here is a quick rundown of what it is.

Once we had a plan of attack on this project we started off by removing the blade deck off the mower as it is not a part that will be used in competition and has the potential to create an unnecessary hazard should something go wrong and cause us to crash the mower. Once the deck was removed we started off by getting some baseline stock data before making any modifications to this mower, where we found out that the absolute top speed of this machine as she stands is a sluggish 5.7mph. Meaning that in order to reach our goal of 50mph on this engine we will have to find ways to almost 10x the performance of this mower.

the speed, the first step being a governor delete. By removing the governor we are allowing the engine to rev up to its full potential without choking out. You may ask yourself why would anyone put something on an engine to kneecap its potential, and the answer is simple safety and work life. By deleting the governor we are opening ourselves up to the potential for overheating and catastrophic engine failure because the revs are not limited to the stock 3200 RPM. So while we may be able to gain a significant power advantage it's something we will have to keep a watchful eye on and make sure that we don’t run her too hard for too long and cause a premature failure.

Unfortunately before we were able to test our governor delete, our first problem reared its head, that being a bad battery. While the mower did run and start long enough for us to get baseline numbers it gave her last while we tried to start it up to see if we were on the right track. Upon closer inspection we were shocked it ever started, below is a picture of what the battery looked like when we pulled it from the mower. The sulfuric acid in the battery had leaked and corroded the bolts holding the leads to the terminals so much that when we tried to get a wrench on them they just started to crumble. In the end I had to use the bolt off the positive terminal because there was no other way we were going to get what remained of it out. Fortunately, a wire brush and one Home Depot run later and we were able to get the mower to roar to life once more with a fresh battery. This is a textbook case of why preventative maintenance is important as even though we probably could have jumped the mower off and gotten it to start, the corrosion was already bad enough that it was starting to rust the support bracket, and left unchecked it would have caused extensive damage. 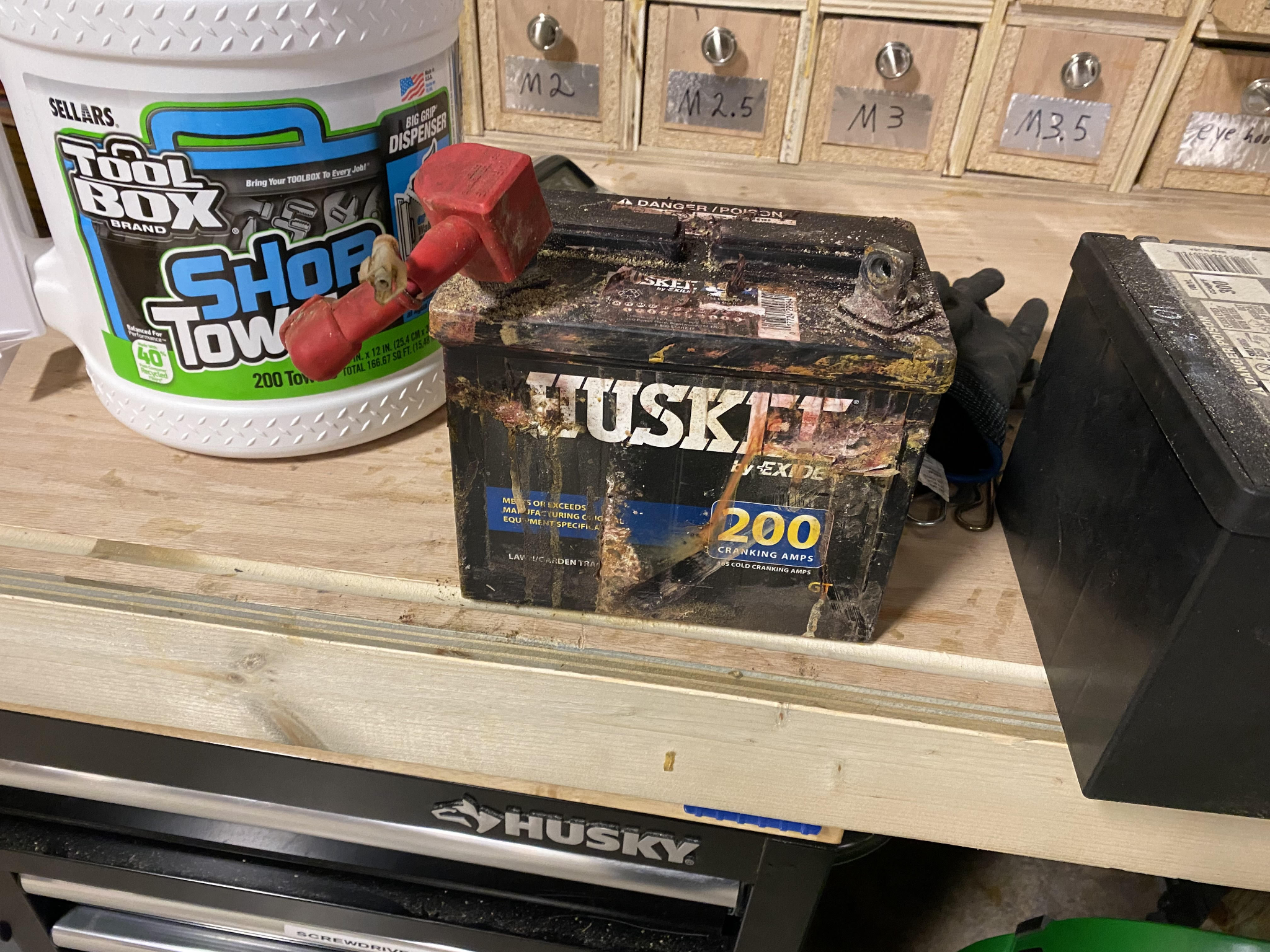 As of right now that is all the further we have gotten with this project. Be sure to follow along and see how we progress to the final product!