These past couple weeks I all but finished up the pinball machine, completing the ball return system, tuning the launchers and finishing the wiring. This leaves the only things left being  to install the legs and cover glass. These are very minor things that don't hinder the function of the pinball machine as a table top machine, but will be necessary additions to make it a free standing system. Additionally in bringing the machine to its final form a few problems came to light, such as the scoreboard, the fact that the machine only works with a very special type of bearing, and questionable long term reliability of some of the 3D printed parts.

To start, one of the big things I was trying to do with the pinball machine, the scoring system, had to be abandoned. The abandonment of this was due to the fact that try as I may there were so many shorts in the arduino shield and my coding ability to debug this is lacking. While I wish this were something that could be added in, it is beyond my ability to successfully implement such a thing in a reasonable time frame. As you can see in the images below there are a ton of tiny whires that even if they arent shorting directly somewhere there's a very real possibility that the current going through each wire is causing edie currents that would cause false reads in the system and short of massive amounts of shielding or a well designed PCB I have no good way of solving this 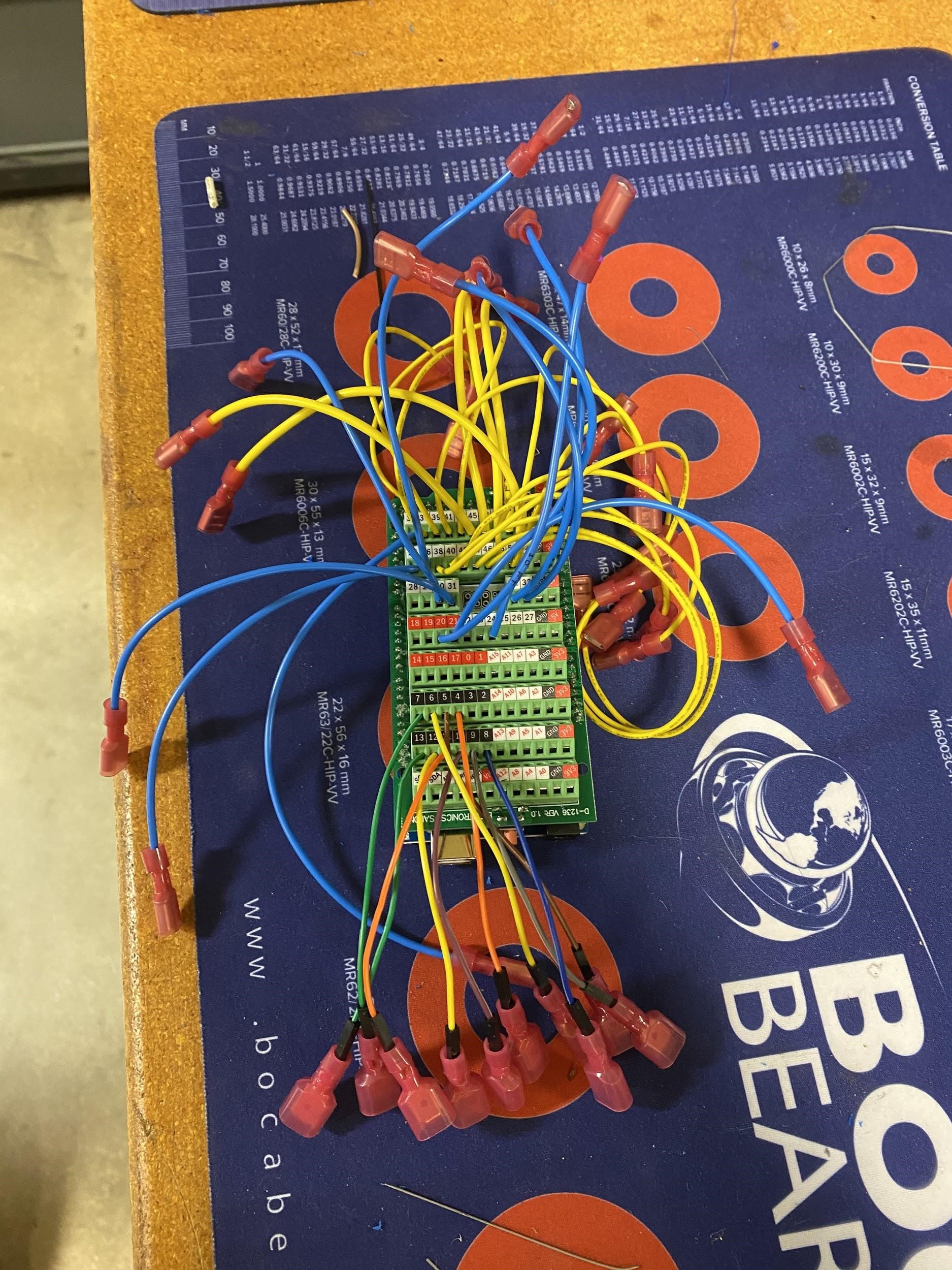 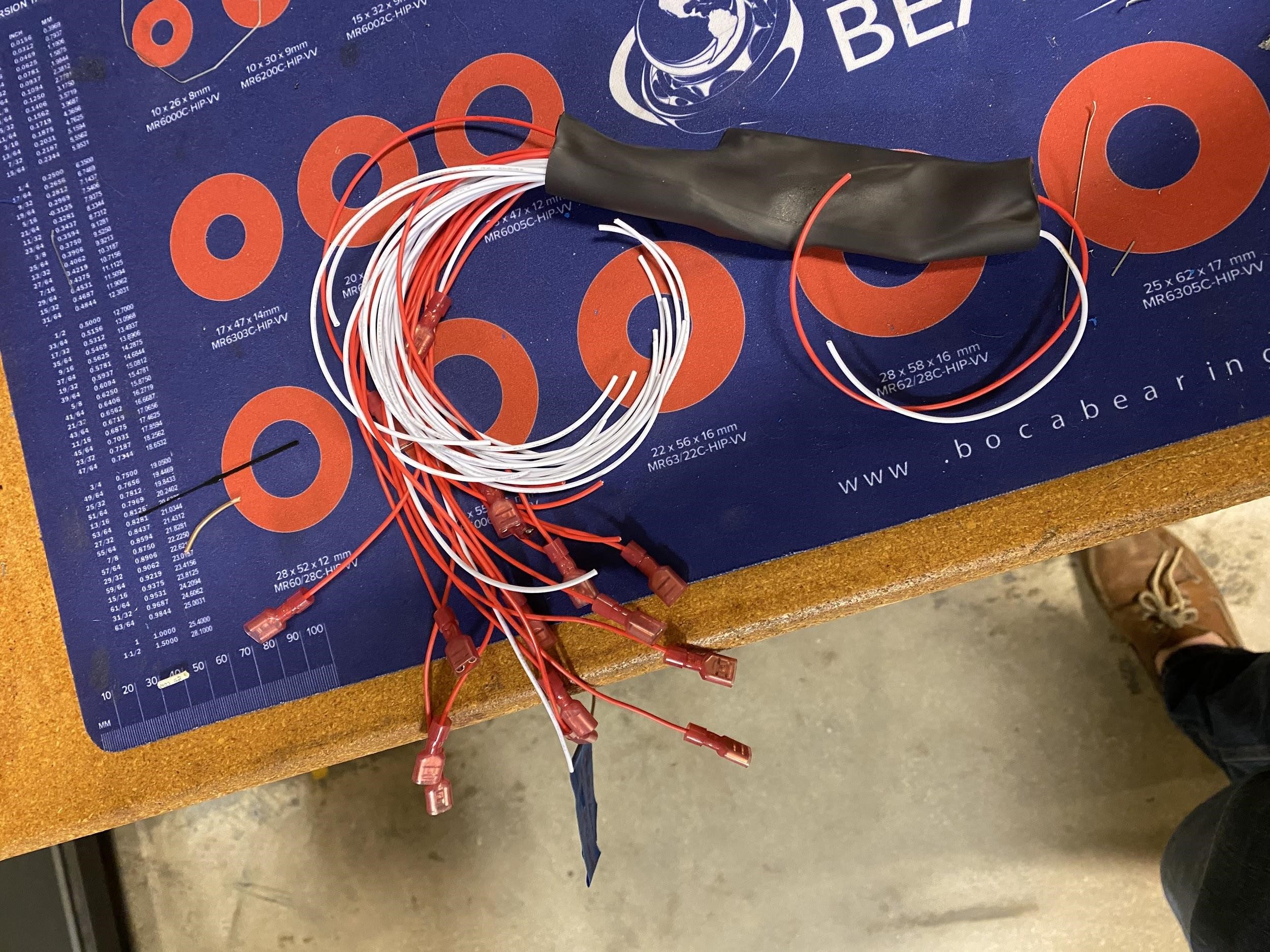 After coming to the conclusion that a score board would not be viable, I wired up all the electrical components and the input devices to their respective relays. This makes the system a fully analog system where if you press a button it trips the relay and flips on the respective device. As soon as the button or switch is released the relay will flip right back to its open state resetting the device. This is a much simpler system then what a score board would require as It would have relied on the button sending a signal to the arduino and then the arduino counting how many points that signal was worth and then throwing the signal over to the relays to trigger them. While this would have allowed some really cool stuff to be done in the code, it does make  it a lot harder from an electrical stand point. And that electrical complexity is why this rout was forgone in favor of the analog system that was implemented. 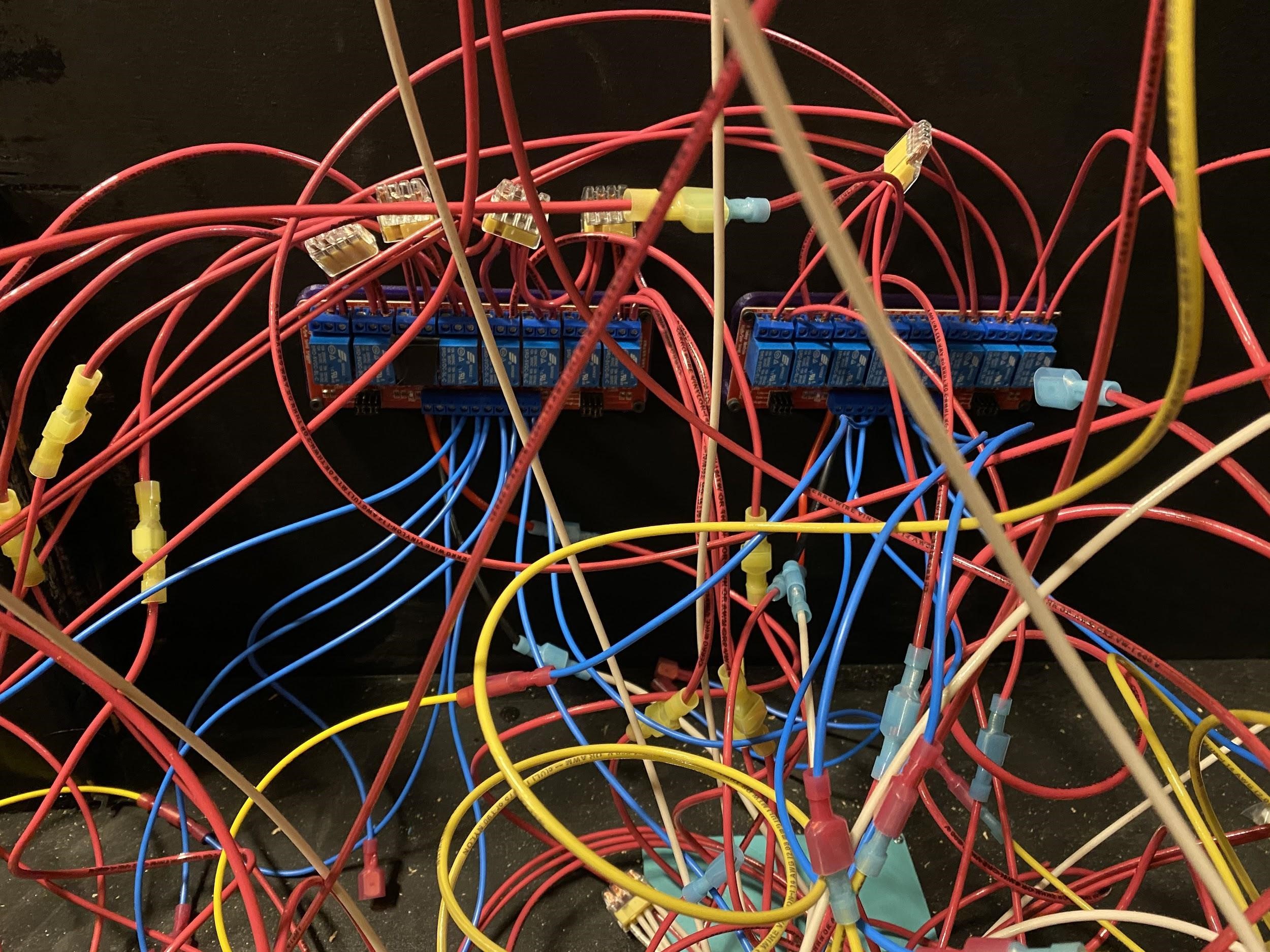 The next thing that had to be done was to tune the launching system. This was a pretty simple process as to time the system I just had to cut an extra spring until the force it applied was enough for the solenoid to trigger and that it had enough power to reset the solenoid after it had fired. In addition to the spring the system was also tuned by opening up the pin holes so there was little more room for the pins to move without as much friction.

After the launching system was tuned the next step was to sort out the ball return system. Although I did design and build multiple versions of the ball return system that could be 3D printed they all worked with questionable degrees of success, but none of them were what I felt was reliable enough to be put into the final product. To fix this I went with a store bought ball trough from pinball life, https://www.pinballlife.com/ball-trough-assembly-4-ball.html, this worked almost perfectly out of the box. One addition I did add to the ball trough was that I cut the top half off of one of my previous attempts at a ball return system and mounted that so that it would guide the ball into the loading system, this worked perfectly. 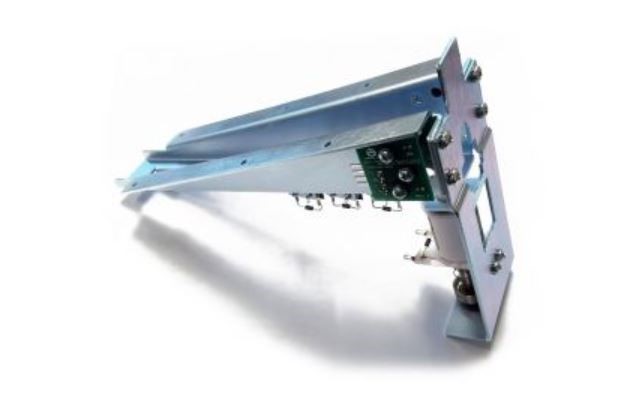 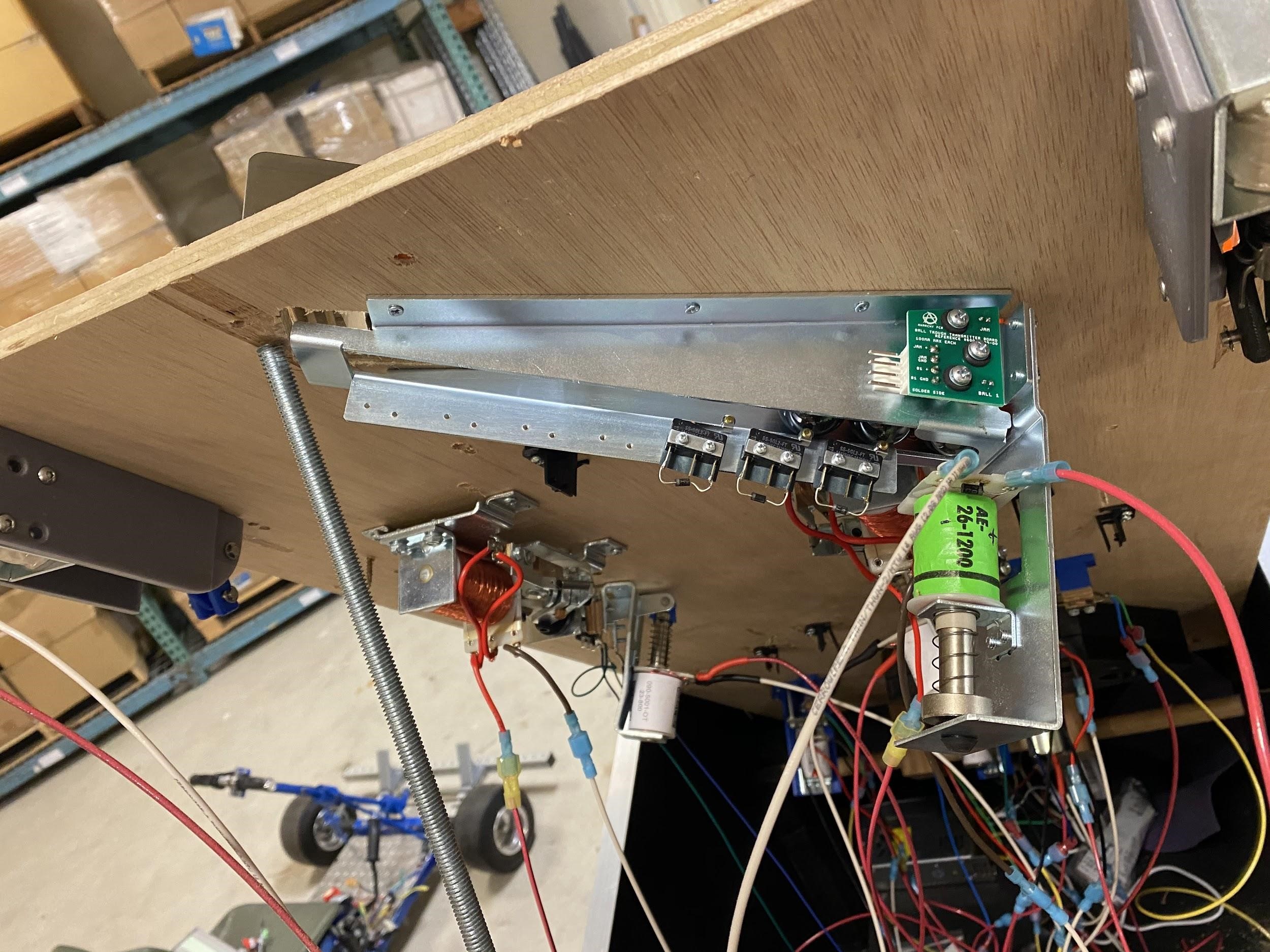 Now that I have covered what was done to get this thing working and why the scoreboard was abandoned, lets go over some of the flaws of the system. And we’ll start with one of the most glaring flaws, the launching system. The problem with this system is that it lacks the power to adequately launch a stainless steel ball bearing and as opposed to redesigning it in such a way that would resolve this issue I used Silicon Nitride ceramic bearings. If this were to be put into large scale production or even for someone trying to recreate this machine at home this is a problem from a cost standpoint as for the average consumer these balls would run about $70 a pop thus they are very cost prohibitive. A solution to this problem would be to use a plastic ball bearing but this introduces a new problem of the game being almost unplayably fast. This may also be able to be solved by making the ball kick out onto the play field sooner as opposed to all the way at the top like it is now. So while this is an issue to watch out for there are enough work arounds for this that anyone following along at home should not run into much trouble here. 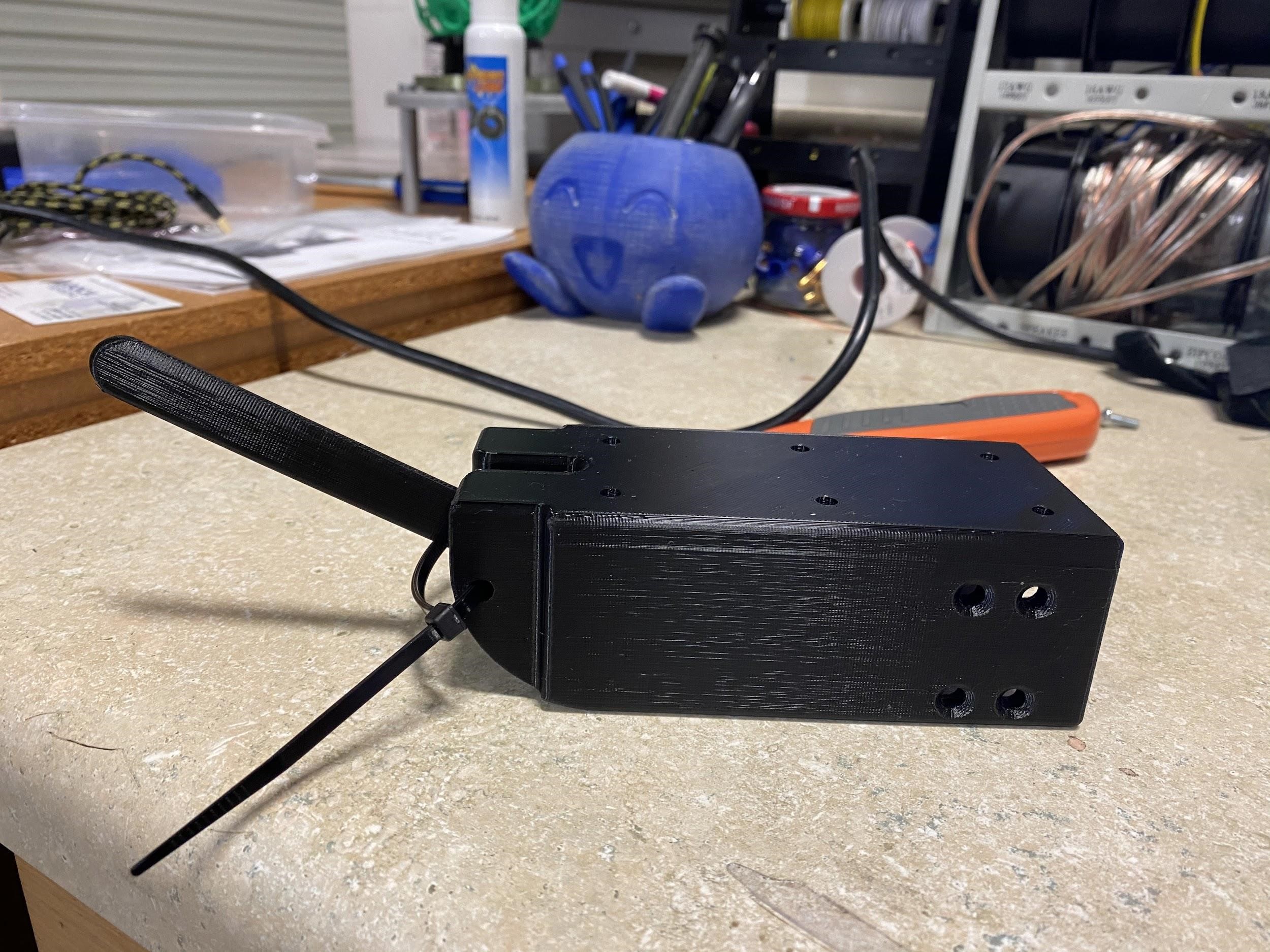 Another problem in this machine is the long term reliability of some of the 3D printed parts. This problem doesn't really have a good solution that I have been able to come up with other than keeping the part files on hand to allow for repairs when inevitably parts break. So far the piece that has shown itself to be the most susceptible to these sort of impact failures is the twin tunnels piece that sits squarely in the middle of the pinball board. After only a few short days of testing this part has already broken 3 of its front connecting legs and one of its back ones leaving only two securing the part in place. If one were so inclined a possible work around for this might be to put some L brackets on the side to attach it to the board, though you would have to inlet the board to the bracket so it would sit flush and did not interfere with the ball. Another possible solution could simply be epoxying the piece to the board on coinciding faces 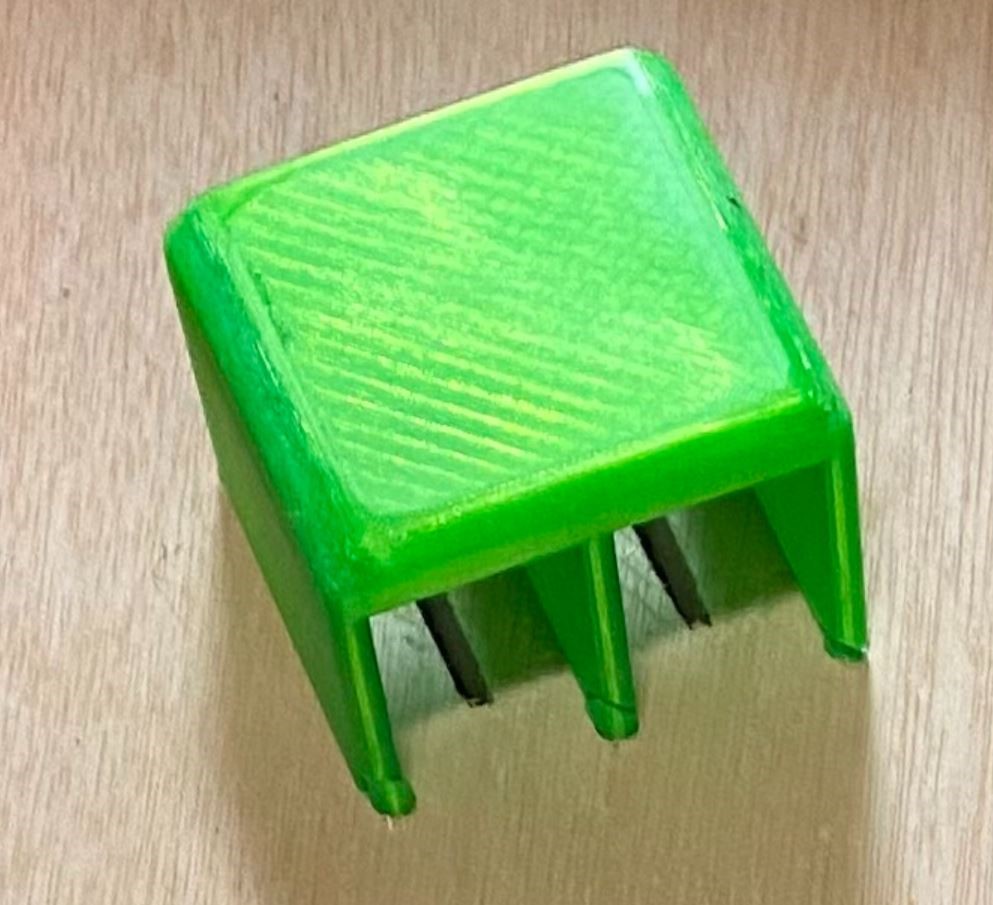 A third problem I had that I can only call user error on my part would be reversing the polarity on the flyback diodes. You have to make sure that the positive side is hooked up to the silver side of the flyback diode or you will end up burning up the diode and having a small electrical fire on your hands. While I only made this mistake once, had I double checked my work it could have easily been avoided and saved me about a half hour fixing the problem. 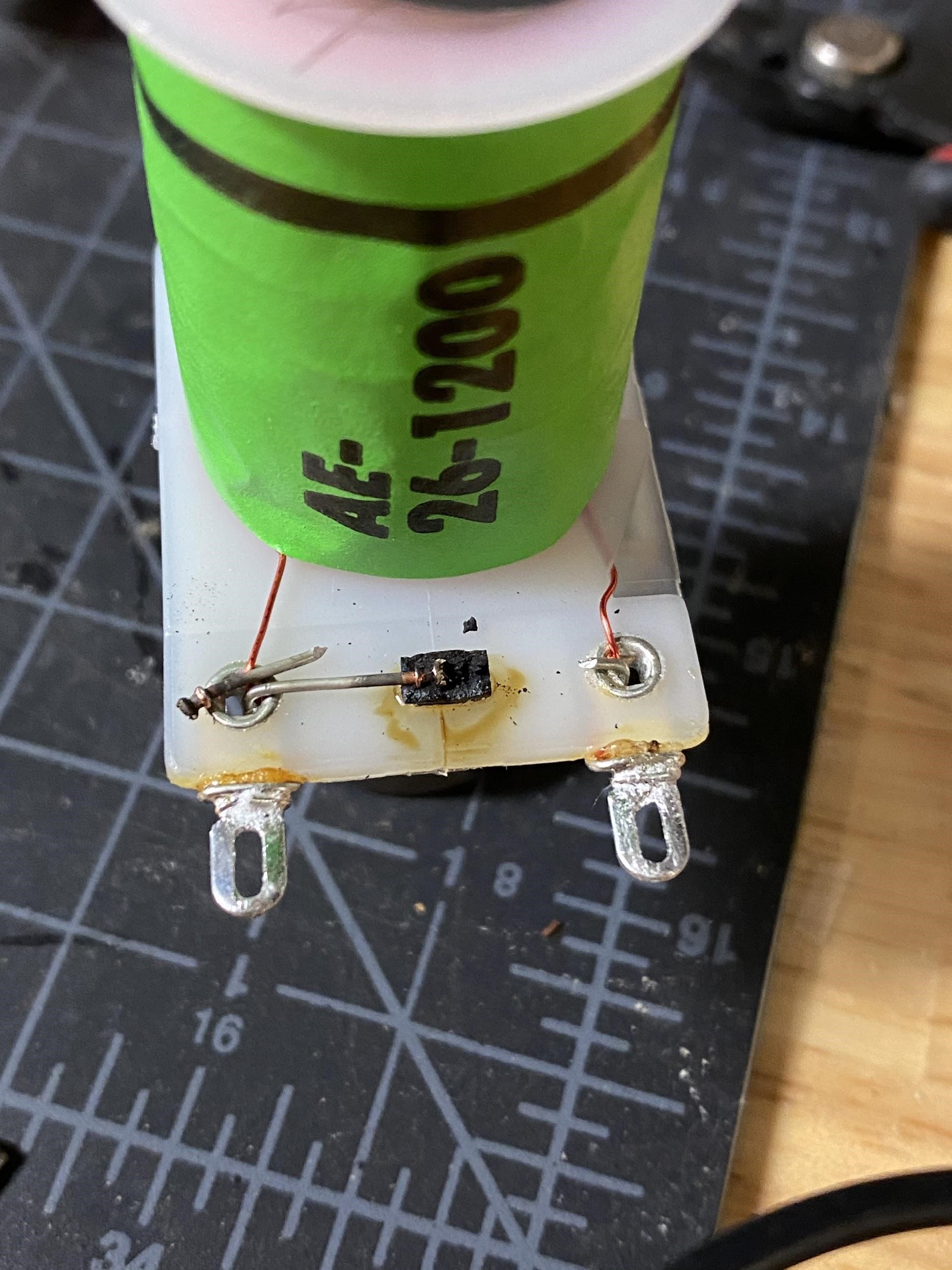 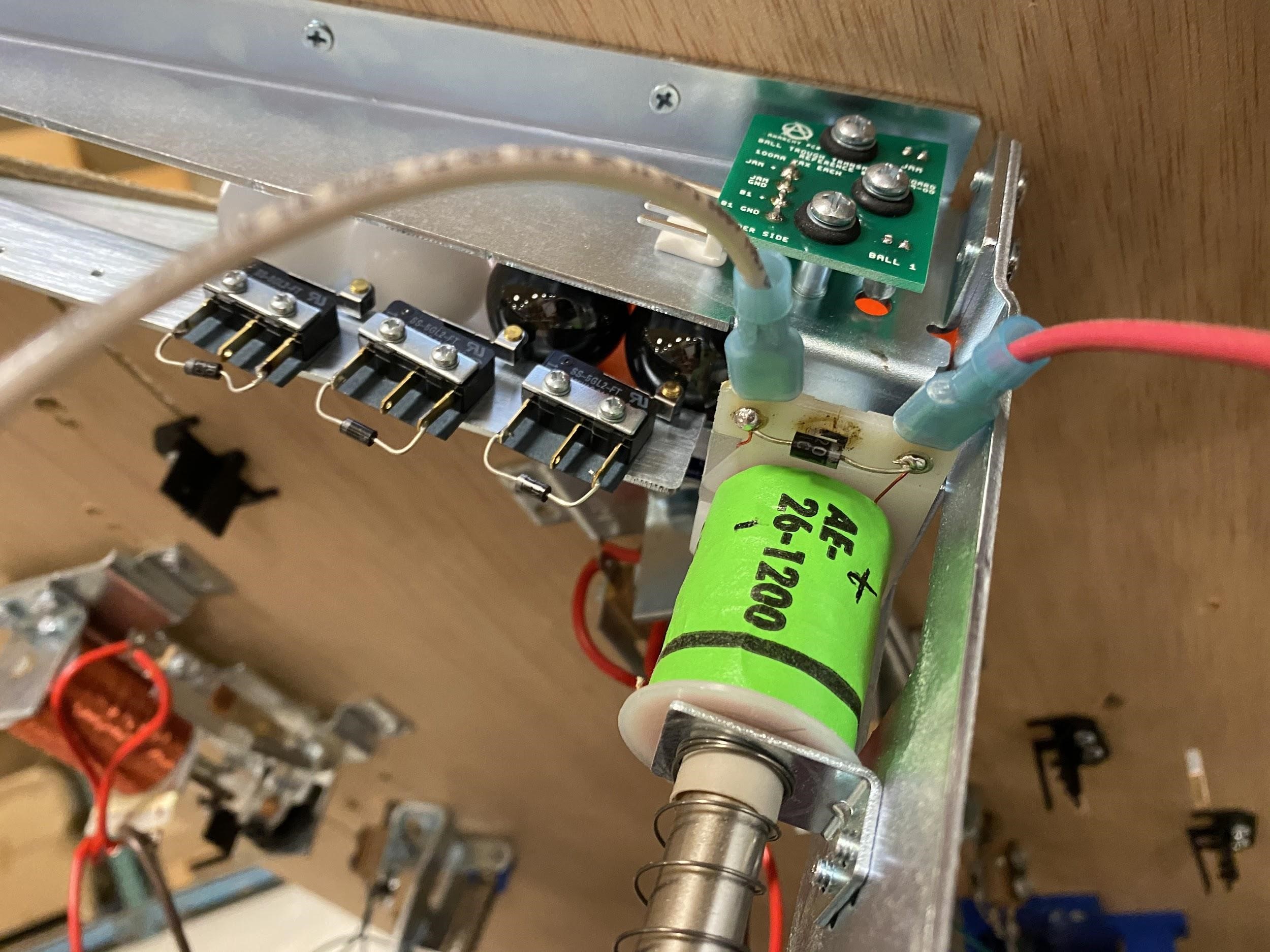 Lastly, while this is not so much a problem this is an important lesson that I learned. Don’t underestimate the time it takes to do wiring properly. While my wiring is admittedly not the leanest on earth by a long shot and leaves a mess of wires hidden in the box underneath, all the connections are done properly and all the relays fire as they should. While I thought this was something that would only take me a day this took me more like a week with all the trouble shooting I had to do and that's not even counting the time I took trying to get the scoring system wired. 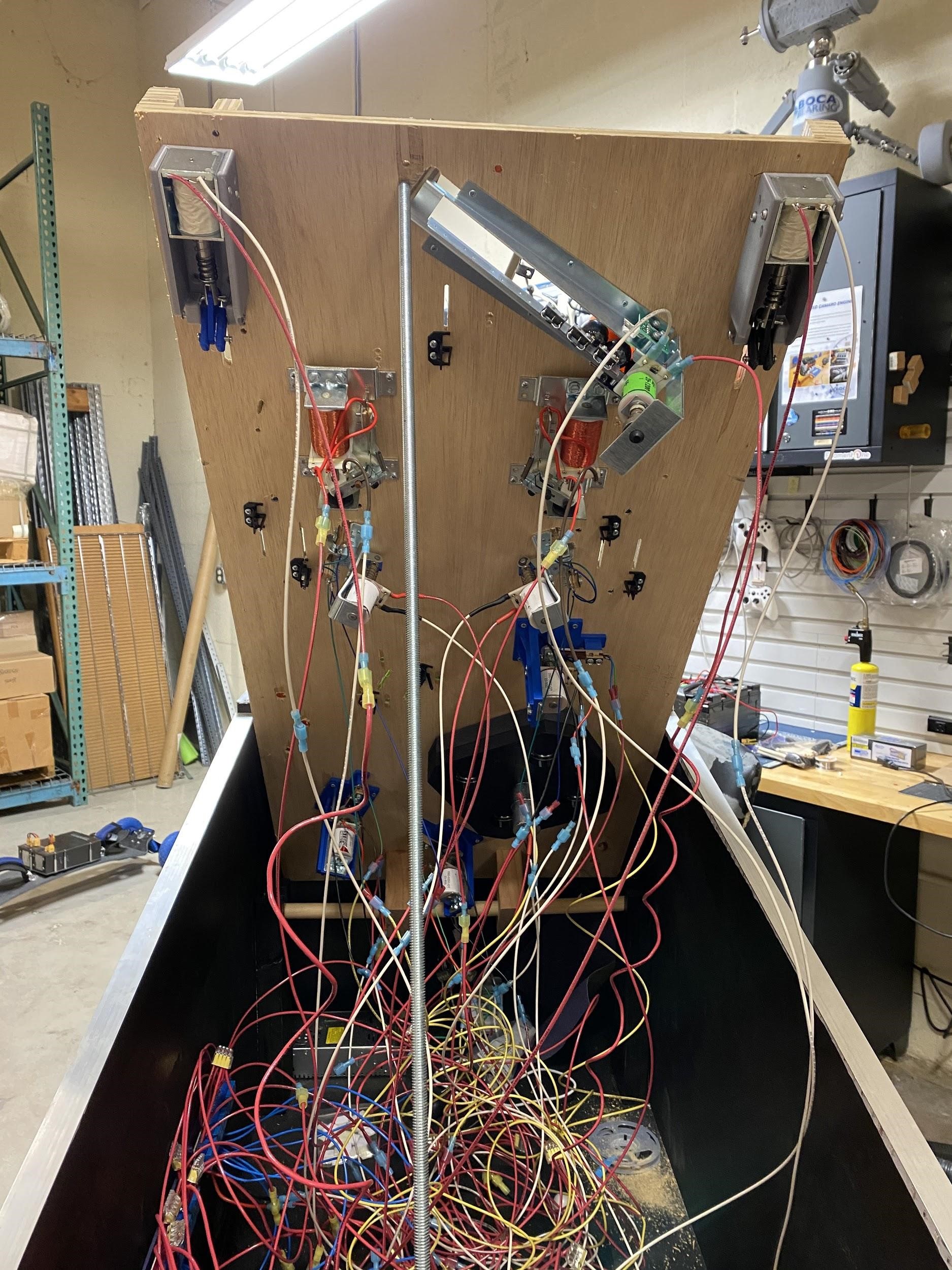 Overall though this project took longer than anticipated, and some of the features initially anticipated had to be abandoned, I would still call this project a resounding success. I have learned a lot about how intricate these things actually are, how to come up with work arounds to unanticipated problems, and how to cut your losses when something just isn't going to work out like you expect. I had a lot of fun building and designing this machine and for anyone looking to try to build a pinball machine similar to this one I will soon have my Github page and GrabCad page  updated with the correct files so that you can build anything I did for this machine with relative ease. https://github.com/Jeff-the-plant/Boca-Bearing-Pinball https://grabcad.com/james.laumeyer-1 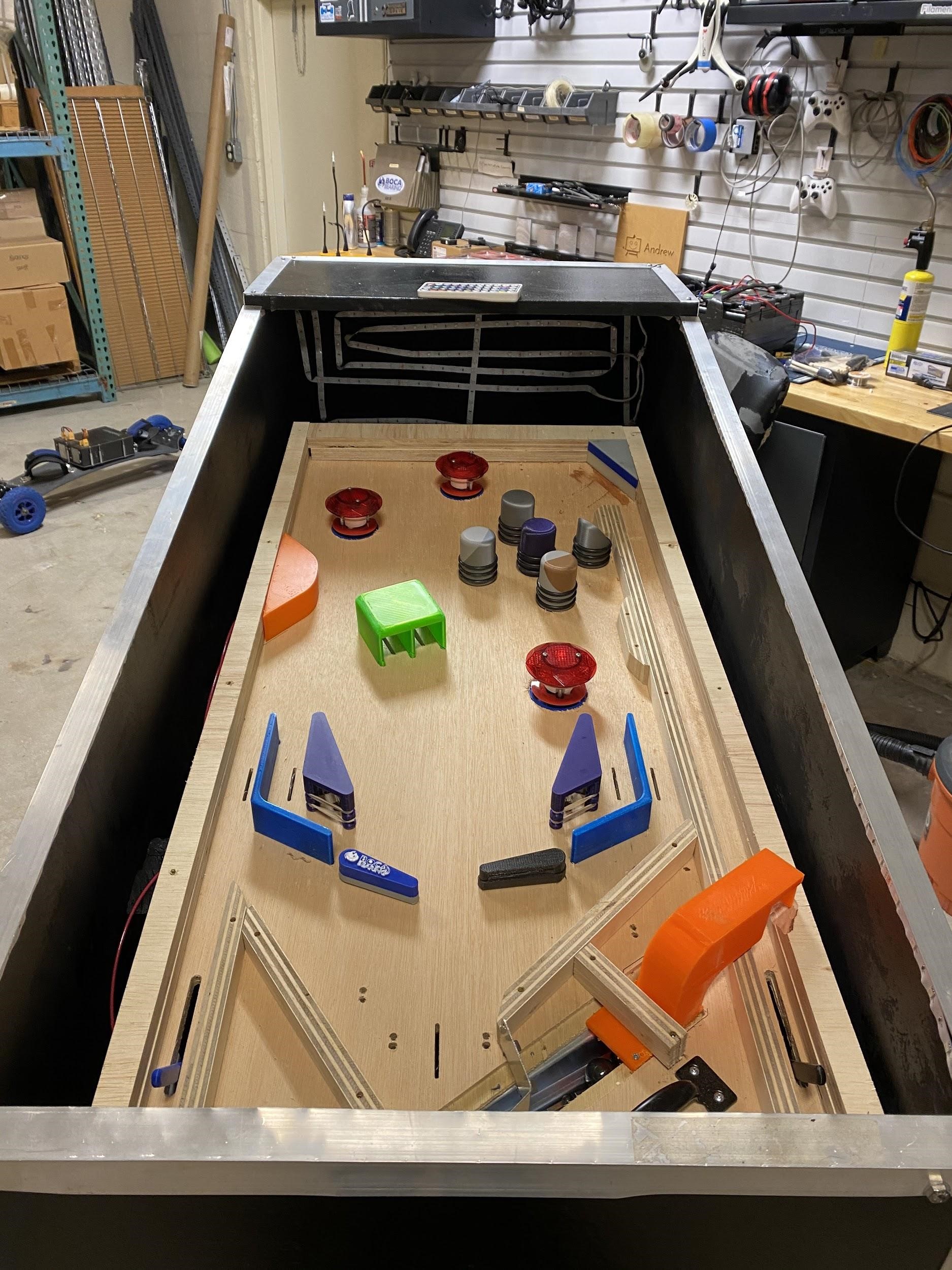