Continuing with our racing mower project significant progress has been made in the month and a half since our last blog update. There is a new front axle, steering system, and motor, the transaxle has been raised, jackshaft has been installed, new fuel tank system built, and sheetmetal molded so that everything fits like it should. It has been a long and labor intensive progress to get to this point so buckle up while I give you the details of what all it has taken to turn a John Deere LA115 from 6mph lawn mower, to a 27hp speed machine.

The first thing mark and I did with this machine was to strip it down to little more than the frame in order to asses what we had to work with. In our initial baseline testing we had noticed that there were two major issues that came to mind those being the steering was way too loose to be safe at any sort of speed and that the ride height was way too high to give a safe center of gravity. Two fix these problems we did a few things. First we replaced the proving front axle with a solid axle that was welded in. This caused the ride height in the front to drop about 5 inches and gave a more stable frame. 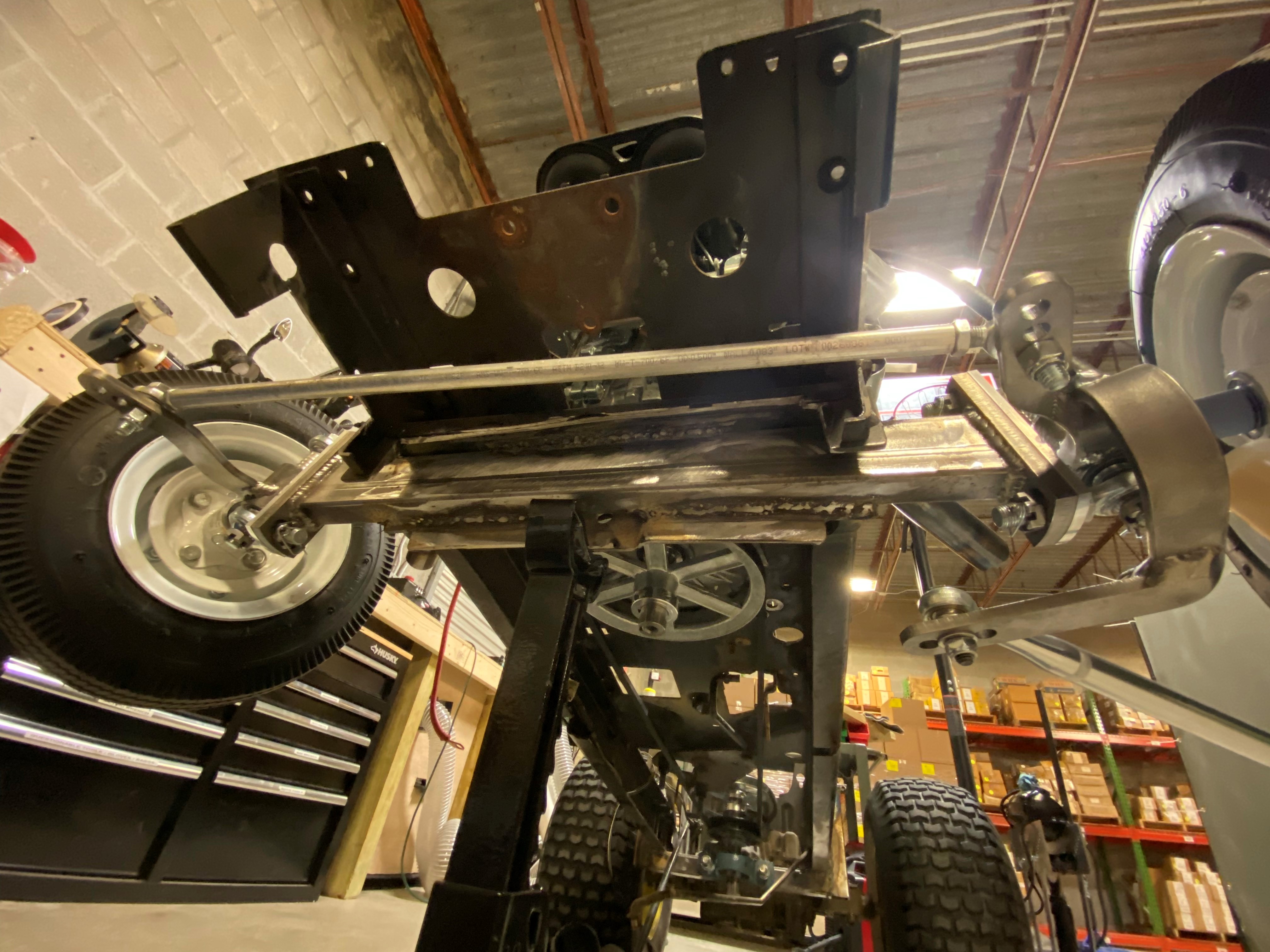 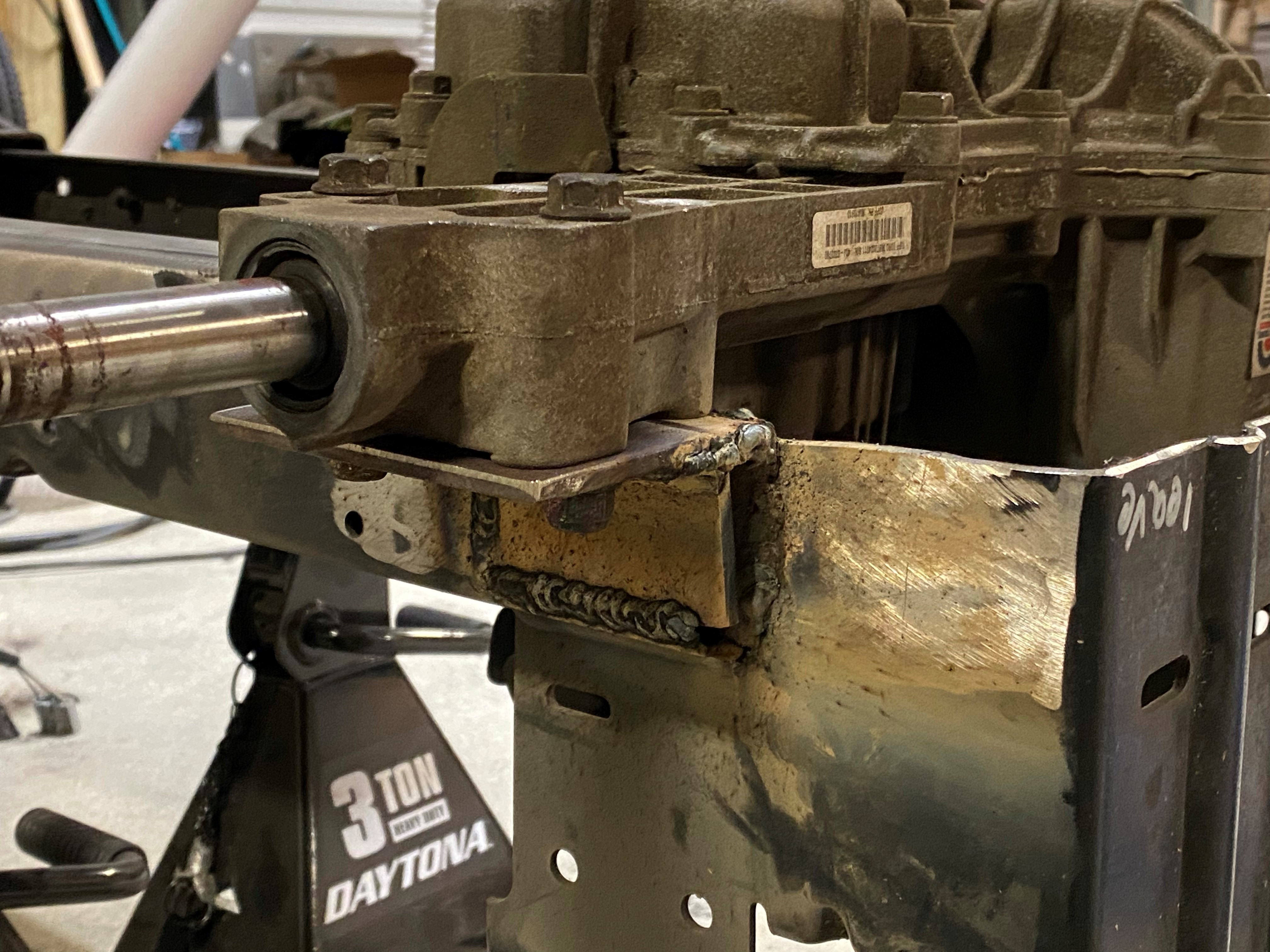 But because of the new higher ride level the belts would no longer line up properly with the mower shaft. To alleviate this problem we installed a jackshaft using our own Boca Bearing pillow block bearings to secure it. This works by using two belts instead of one where the first belt runs from the engine to the pulley on the jackshaft, and the second belt runs from the jackshaft to transaxle completing the transfer of power from the engine to the transaxle. One side effect of this is because two pulleys are used on the jackshaft the gearing can either be increased, decreased or left the safe depending on desired effect. For our use case we geared it in such a way that we should have about a 1:10 gearing ratio where as the original stock ratio was about 1:1 which should translate to something like a max speed around 50-60mph before abounding for the extra engine power

But because we added the jackshaft some modifications had to be made to the body as the jackshaft stuck out the fuel tank window leaving an exposed rotary shaft. To fix this a sheetmetal plate was welded over the hole and then heated up to a point where it was red hot and beaten into a dome till it would no longer interfere with movement of the jackshaft. 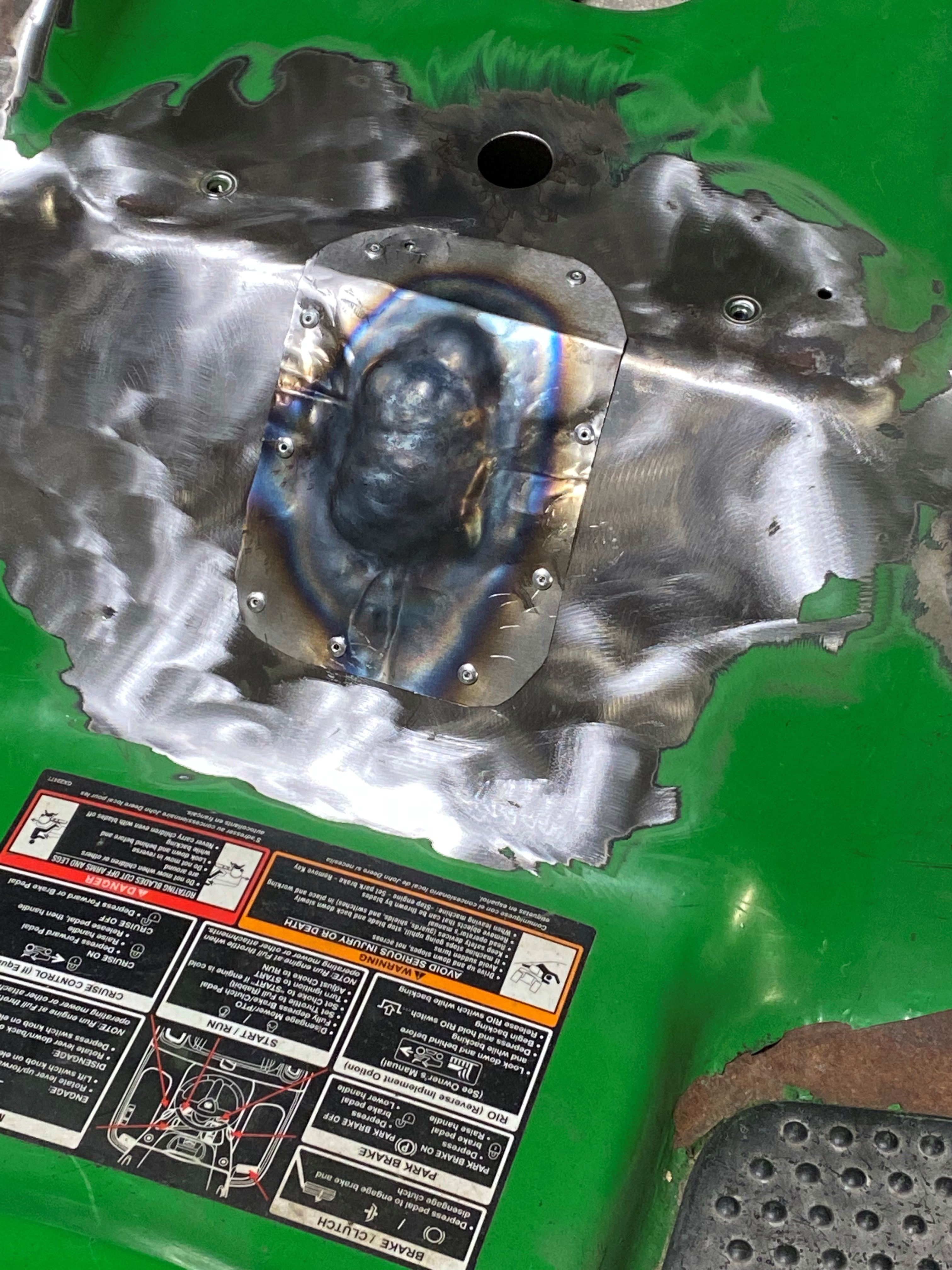 Once all this was complete the next item on the agenda was overhauling the steering. There was a little trial and error on getting the geometry right here, initially it would only steer right, then if you turned left it went right, but we finally sorted it all and got it steering tightly and properly. To do this we welded a piece of steel onto the original steering gear and then used an aluminum steering linkage and two of our Boca Bearing rod end bearings to attach the steering wheel to the control point of the front axle. 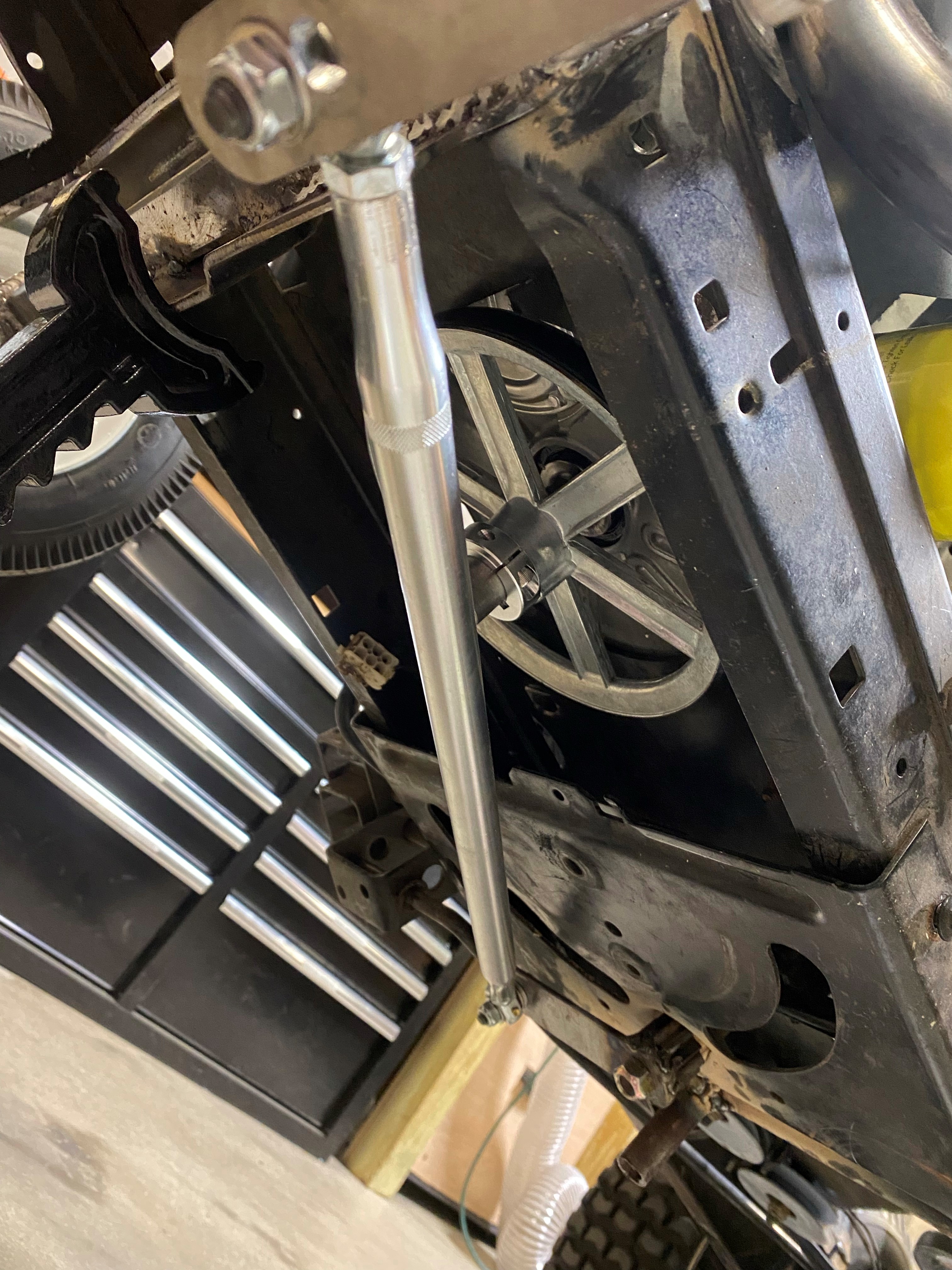 Next due to all the prior modifications there were some issues concerning where the gas tank would be located as the stop one would no longer fit where it was initially. After some thought the decision was made to place the gas tank on the back of the mower with an all new mounting system. To achieve this the paint was stripped off the rear, two pieces of 4in steel tube were cut to size and placed at a distance where there the gas tank would fit between them and then welded into place. Next another piece of that tube was cut and welded across the back to act as a bumper in the event of a collision and then 3/4” round tube was bent and gut tested in such a way to protect the tank from crumpling in the event of a rollover or large object collision. Finally a piece of sheetmetal was welded in on the bottom and sides to prevent and rocks or small debris from popping off the bottom of the tank and to give a cleaner overall look. 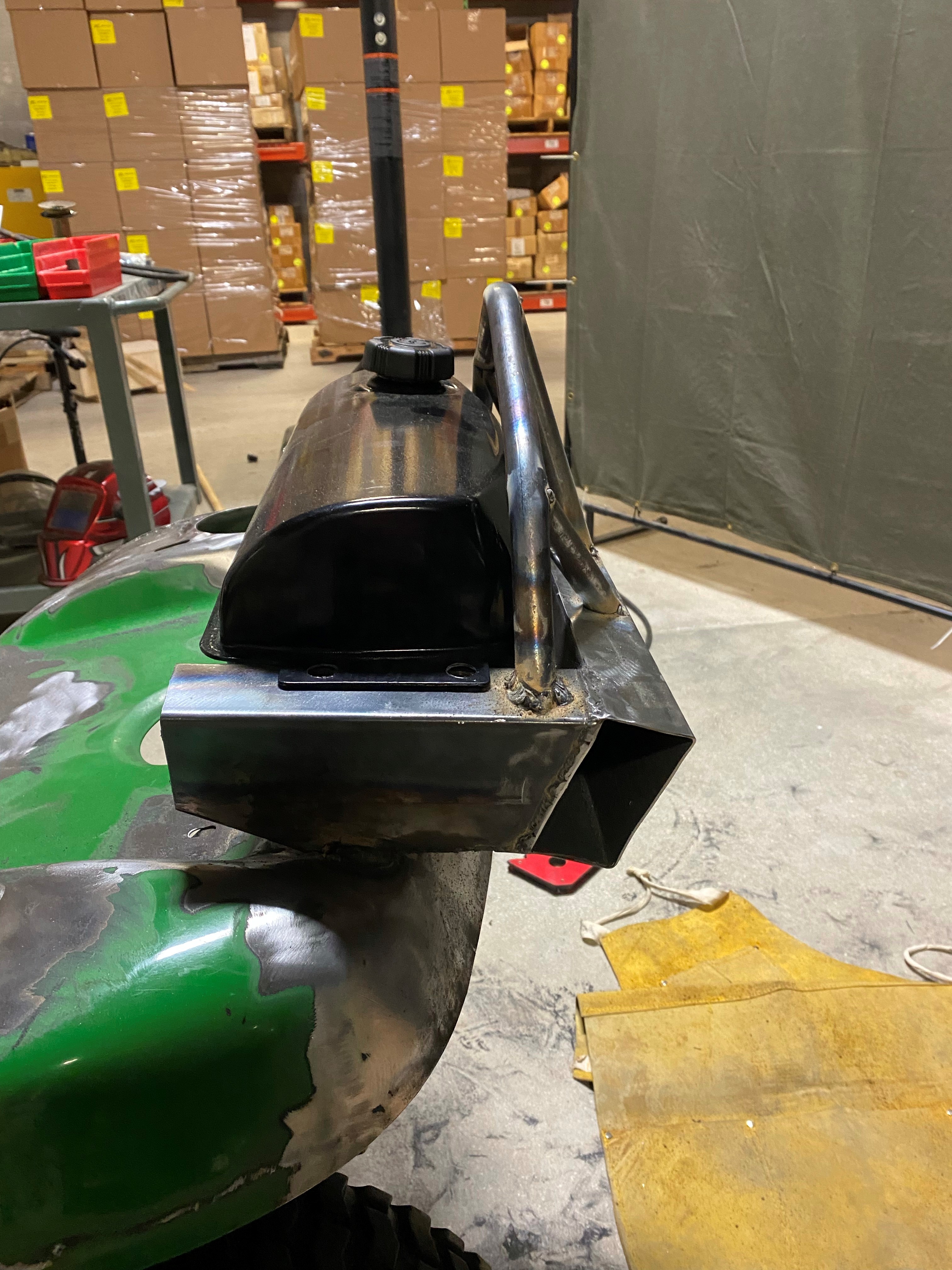 After all this was done some short headers were stuck on the engine, the wiring harness was reattached and the linkages were reinstalled. The mower was then taken outside and tested on jack stands. Happily she fired right up with no fuss, and the test was overall a success. However there was a small issue that the main belt coming off the engine proved to be a little too loose and has a tendency to fly off at high rpm. This is a small problem as it can be solved with just getting a smaller belt. But this test shows that we are very close to having this machine up and ready to ride!