Now that I have finished building the hand and the glove, it was time to start writing the programs for the hand and glove. For the glove, I simply just used the code from an Instructables. It was created by Gabry295. The link to the instructable is:

There you can find the code for the glove. I went through a few variations of the code but I just eventually just kept the code the way it was.

The code is as follows:

This code worked pretty well for the glove. I did a Serial.println of the thumb, index, middle, ring, and pinky values to check if the numbers made sense. I tested it by wearing the glove and opening and closing my hand and checking if the those values change. It did, so I knew the code was working properly.

For the robotic hand part, I had some difficulties trying to get it to communicate with the glove. At first, I assumed that it was receiving some kinda of data from the glove so I decided to Serial.println the values that it was supposed to receive. But doing this and checking the values in the serial monitor in the Arduino program, I got nothing. Nothing popped up or any kinda of random values or letters. So I thought to myself that it wasn't working or maybe that the servos didn't work.

But to test the servos, I decided to run one of the examples of the servo shield. The example was called servo. I uploaded it to Arduino. When uploading, I have to have the xBee's off or the upload would not complete. After uploading the example, the servos would go to its minimum position to its maximum one at a time. So now I knew my servos were working.

So I went online and started to look up how to make sure the XBee's were communicating. After spending some time learning about the XBee's, I decided to check the product page of the XBee shield that I am using on Sparkfun.com. They had a guide on:

There I learned that the XBee shield had a serial select switch at the bottom left. 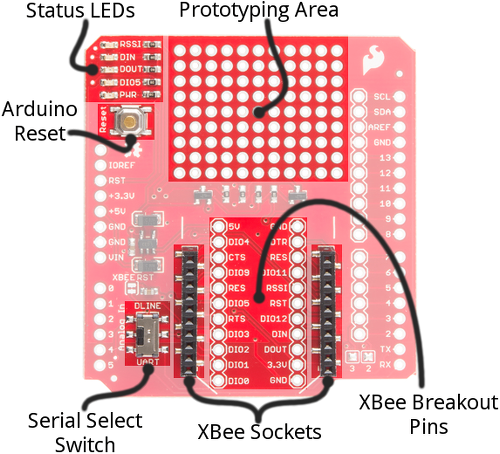 So I just simply switched it to the UART side and the XBee starting to receive data from the glove's XBee! So now I was getting some kind of data from the glove. The next step was to make the servos move in response to the movements of the fingers of the glove.

The hand program from Gabry295 didn't work for my robotic hand.I figured that it had to do with the shield that I am using. I am using the Adafruit PWM/Servo shield. The command servo.write(angle) was not working for my servos. So my next step was to research servos and PWM (Pulse Width Modulation).

I went online and tried to learn what PWM was and how it worked. I found it difficult to understand it by just reading about it. So, I just decided to look over Arduino codes that used PWM to control servos. After many trial and errors, I came across just a few codes that implemented PWM. But from those codes, I learned a little more about PWM and how to include it in your program. I came across a program from:

that uses the following function:

This function converts angles to "ticks" that the servo can be set to by using the command pwm.setPWM(channel, 0, ticks). I decided to include this in my code, well in Gabry295's code. So after trying different ways to make the hand move, I ended up with the following code:

As you can see in the code, there was a lot of things that was commented out, especially in the section of controlling the servos. Those commented out commands were the different several ways that I was trying. I also deleted some lines to not make the code too long. But this code was what eventually worked for me. Bear in mind that this my second Arduino project so I am fairly new to programming the Ardunio and learning the language of Arduino. So there is probably a better way of controlling the hand or even a simplier way.

So now that I got the code working, I had to recalibrate the strings of the fingers. I had some trouble with the movement of the fingers. At first, my problem was that I attached the strings to close to the center of the servos, so I had to reattach them further away from the center to provide a better movement of the finger. But this caused a problem for me for the middle servo of the 3 servo section. I already cut the horns to a small length where I could not attach the strings further away from the center of the servo. If I did attach a new horn, it would interfere the adjacent servos. So what Bryan from here at Boca Bearings recommended was to create some blocks that would raise the middle servo so I can attach a new horn without interfering with the other servos. And it worked!

Here's a video of the hand and the glove working together. It's the same video as shown at the top.

As you can see in the video, the servos wouldn't move to its maximum position. Maybe there could be something in the program that I can adjust to make the servos rotate all the way. I tried adding some numbers in the setAngle equation but it seemed that it didn't make much of a difference.

If anyone wants to help me out in figuring this or have any recommendations, please do by writing a comment in the blog. I'm still learning so anything will help me. Another issue that I was having was that sometimes the fingers don't move well and smoothly. I think that source of this problem would probably be individual parts of each finger. Maybe some of them don't interface with each other perfectly.

If you have any questions or would like to know anything about the setup, just drop a comment and I'll try to get back to you as soon as possible.