The purpose of this project is how to learn to create an autonomous land vehicle that can be programmed with waypoints for destinations to travel to. I will learn how to also add ultrasonic sensors to the rover to avoid crashing into any obstacles on the way to its waypoints. This project will also help me learn more about RC cars such as the motors and the ECS. I have never had experience working with any type of RC cars and their components. I will learn things such as the frame of the RC car as well as its suspension. I could probably learn how to change certain parts of the RC car to get different results. I’m into cars and learning on working on cars so this project will help me learn more on a smaller scale. I will also learn how steering works. Then maybe I can apply this concept to a future project such as go kart. I will also learn how to use a multi-channel transmitter to control the RC car when it’s not in autonomous mode.

For the design of the Rover I will be using a platform already designed by MINDS-I. The model in particular will be the 3-in-1 4X4 Robot as seen below. 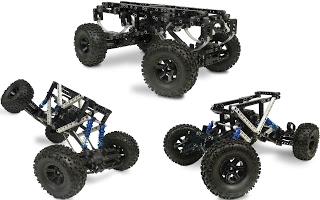 The specific version of this robot that I will be using will be the Crawler which is in the bottom left. I will also add ultrasonic sensors to the Rover. Hopefully I can attach 3 such as in the picture below. 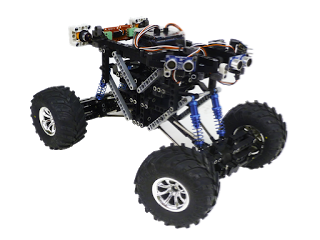 The following is the list of parts that I will be needing to complete this project:

MINDS-I 4x4 3-in-1 Robot, $475 from MINDS-i. This will be the platform on which I will be building this project on. The kit includes the parts to build the frame as well as the motors to run the rover. The kit also comes with a battery to power the Rover.

An ArduPilot Mega (APM) 2.6+, $159.99 from 3drobotics.com. This is the autopilot system that I will be using to control the Rover autonomously. It’s based on the Arduino boards and there is a chance that I can add some code to the APM if necessary. But, this APM can be interfaced with a program called Mission Planner to program waypoints onto the board for the rover to drive to.

A 3DR uBlox GPS with Compass Kit, $89.99 from 3drobotics.com. This is the GPS for the rover. This GPS can connect directly to the APM. The APM is actually designed to work with this GPS. This GPS also incorporates a compass within the casing of the GPS module to know what direction the rover is going in.

FlySky FS-T6 2.4ghz 6 Channel Transmitter and Receiver System, $54.95 from hobbypartz.com I will be using the receiver and transmitter to control the Rover when it’s not in autonomous mode or if by any chance there is an emergency where I need to take over the control of the Rover.

3MBI240 XL-MaxSonar EZ4, $34.95 each from 3drobotics.com. I will use these sensors to avoid any oncoming obstacles. The APM is already configured to work with these sensors. I am planning on ordering three so I can have a similar setup as the one shown in the second picture above.

For this project I couldn’t really find any parts for a lower price since most of these parts are coming from 3drobotics.com and they are of better quality. I came across a few clones of the APM but I am not sure of their quality or if it works as well as the original APM. So I rather not risk it and stick to the original APM 2.6 from 3drobotics.com. For the frame of the rover, I could go to a cheaper one but this one has many potential since it has 3 frame designs that you can build with also the possibility of creating your own design from the parts of the kit. So the total price for the project comes out to about $895! That’s without taxes and without any possible shipping charges. It’s a pretty pricey project but maybe the cost can go down if I could use a transmitter and receiver from another RC car.

As always, I will try my best to finish the project as soon as possible and to try my best to make it work perfectly. When the MINDS-I robot comes in, I will try to finish assembling the rover in about a week or two. From there, I will then connect the APM and the receiver to the Rover and try to program it. I will say that if it turns out well, I can accomplish that in a week. I also need to add the sonar sensors and make sure they work well. I hope that will just take a week or less. I am not sure how long does MINDS-I take to ship things or how long does 3drobotics.com take to ship their things, but I hope that the MINDS-I kit comes in first. So then I can work on assembling it while I wait for the electronic parts to come in from 3drobotics.com. I will also add one more week to the weeks that I mentioned above for any debugging that I may come across or for any kind of setbacks. I’ve learned so far that every robotic project that I have done, I always come across some difficulties that slows down my progress. So I believe that this project will take me about 6 weeks to complete.