Autonomous Rover Part 4: Finishing Up the Build and Some Demonstration


So I have gotten the MINDS-i Robot up and running. The video above is a quick simple video of the Rover driving on some grass and uphills. It seems to be a very sturdy frame. There were times where I accidentally flipped the rover over upside down when trying to drive up something very steep where there was a stop or something to go over at the end. But the frame stills holds up.

In the second video above I'm showing how the differentials were made and how the drivelines were connected to them to make a drivetrain. Once that was done I added wheel hubs, the knuckles, and bearings inside the hubs at the ends. This part I accidentally did not record. But this was shown when I was working on the rear drivetrain. I also added the servo to the front drivetrain.

In the third video I finished in building the MINDS-i Robot. I just simply attached the drivetrains to the frame with a different kind of lock that allows rotation. This in turn allows the leaf springs to deflect when needed. I also attached the drivetrains to the motor shaft. When I was doing this part I realized that I had the motor upside down so I just fixed that by simply unlocking the motor and attaching it in the right position. Then the wheels were added and I was done. I later figured out that the differential in the front drivetrain was in the wrong orientation. So when I was trying to push the Rover by hand, the front wheels were working against the rear wheels. This didn't let the Rover move at all. So I had to remove the differential from the drivetrain and just turn it upside down to fix the problem. This was also a good time to add grease inside the differential so I did that, as well to the rear differential.

Once all that was done, I then attached the RC components onto the Rover. I used a FlySky transmitter and receiver to control the Rover ( or MINDS-i Robot). I placed the receiver with a zip tie and a piece of double sided tape. The antenna was tied down in a secure position with two zips with the zip ties not being too tight. The ESC was tied down with a zip tie alone and the battery was held in place by battery holders that came with the MINDS-i kit. 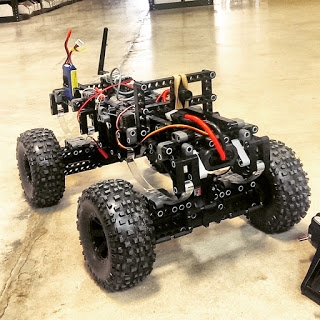 Later on we decided here at Boca Bearings to add on a FPV (First Person View) camera on the Rover. So we got a FatShark 600TVL camera. I used some beams that were not used in building this model and the little remaining locks that I had which are now all gone to set up a little overview for the the camera to be set on. I just used rubber bands to hold the camera in place for now and the camera fits perfectly in between two beams. The camera was then connected to a FatShark transmitter. The video was then transmitted to some SkyZone goggles. We just got a pair of FatShark FPV goggles so later on we're going to connect the transmitter to them.

In the video above I also created a small obstacle to show how the MINDS-i Robot drives on an uneven surface like the pallet. The next step now is make this Rover fully autonomous by connecting it to an ArduPilot Mega (APM). I have already ordered the APM from 3drobotics.com but they're taking a pretty long time to get it shipped along with a GPS and some sensors. It's been already a month since I've ordered them so I contacted them. They said they will make it a priority to ship the parts so I am hoping for the parts to come in soon. So that's it for now with this project. There will be more to come.