This is it! My Jato 3.3 nitro is now 100% Boca Bearings! It's time to hit the road and get some telemetry data. Here is a video of the first few runs to test the telemetry received from the Traxxas app.

After a few runs it was evident that the power-to-ground was very consistent. If you notice the car just wanted more speed and the last run I did not apply the brakes in time; only to spin the car into a free-way at the end of my run (note the trailing words of my excitement :).

To confirm the consistent power I started up my Traxxas App and began recording my "dashboard". The dashboard is a summary of all the sensors on my Jato 3.3. As a quick summary here is what the dashboard is measuring at the receiver:

These values seem as though they are being transmitted in real-time, but in reality they arrive at the app on my iPhone at approximately 0.011 second intervals or 11ms update rate.

The setup of this telemetry is very important, of course, it is the lynch pin of this entire submission series. Anyone can show the data on their app, the difference in this setup is two-fold:

b) Allows for 3-axis of comparisons -- I use temperature, RPM, and GPS data points (customized for additional sensors)

c) Allows for 4th axis which is 100% customized -- I use a comparison of calculated speed (rpm*ratios) to real speed or slip!

The recordings are extremely important since I use an app to record my iPhone's screen so that it can be overlayed the actual video recording of the speed run. This gives me a great analysis tool to playback, rewind my RPM and speed values all the while watching the way my Jato handles.

The recordings also give up data. Luckily I know data, and know how to program with data to create database records. This submission will focus on that data.

I was messing around with the Traxxas app and found a way to email my media recordings. To my surprise it was a *.csv file or comma separated file which MS Excel is capable of opening. Applying years of database programming experience, I was able to create a useful VBA "macro" for an Excel file. Since not everyone has access to database software I was able to create a semi-database using an Excel Worksheet. Everyone is welcome to use it. It is fully described in how it works on the first worksheet.

Here are some key features of what I built into this macro:

a) Comparison chart of all my imported runs (max and min temps, speeds, rpms)

Compatibility note: this macro was designed in Microsoft Office 2003 meaning it has been tested on Excel 2003 at this point.

These runs have been noted as follows:

Let's take a look at the media being imported. Here is a screen recording of the data that was imported

This is what you are actually seeing in the screen recording above: 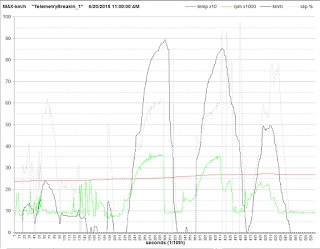 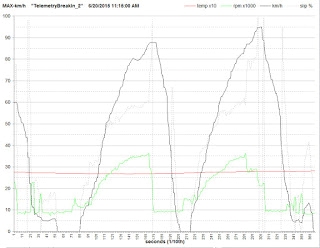 The data is simple to read when you can compare the points on a timeline such as this line graph. Each 100 points of data represents approximately one (1) second of run time.

Here are some interesting extractions or conclusions we can now draw from the data: 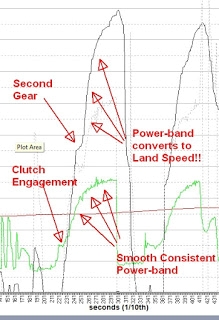 1. The first and MOST important in my opinion is the smooth rpm/gps acceleration curves!!!

This was not possible in my pre-Boca runs. I love the fact that my clutch engages at 15,000 rpm without crazy shifts in rpm meaning the engagement is smooth and consistent.

2. The eye-popping result of my engine bearing changes are that there is a very, very smooth power band on my Boca Bearings/Traxxas 3.3 engine. I see good power distribution and a very, very clear indication of my maximum "horse-power" stage as shown in the rpm to gps power-band to GPS comparison

3. I really like that the rpm plot line clearly shows the speed at which I engage my clutch, then engage my second gear, and if you look closely it shows the down-shift back to first gear on deceleration.

4. I have roughly counted Test Run #3 shown in the first video above as the third run into the Freeway at the end of the road! Yikes:

Test Run On the Freeway 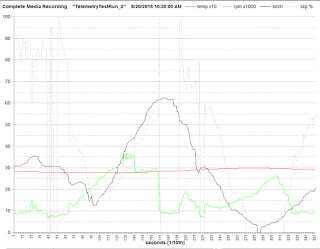 Overall beyond the data, my truggy kicks in the speed at a more predictable pace. I am able to apply the throttle without hesitation since the car handles as expected throughout the power-band. It's crazy fast, but I feel more confident then ever when doing speed runs using Boca Bearings. Just look at the following plot lines. I have never been able to consistently run as high rpm's and speeds without crashing or wiping-out due to erratic behaviour. Traction plays a huge part in this. 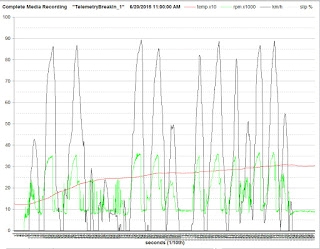 In my next submission I will take what I've learned in this initial setup and try to get faster high speed runs. My plan will be to adjust the second gear higher and give it a lower ratio to accelerate faster since the power-band is there and is very willing! It seems that my slipper clutch could use a little more grab since my rpms are there but the gps is not following as quickly (reduce my calculated slip). May be even foam tires??? Who knows!

When power is understood and consistently applied to that small patch between your tires and road, you win races.