This week, I have received all of the parts required to complete the Zerobot. I completed the assembly of the electronics and mechanics of the bot. Since I used a different battery pack, I made some additional modifications. In the original writeup by Max.K, the battery and power charging chip were separated inside the bot. In my construction, I kept the components together and cut out a port in the rear of the bot to allow for charging and power supply to the Zero. I will likely hardwire the Zero in the future but this allows me to turn it on and off by unplugging the battery while the bot is sealed. I improved the mounting of components to the PLA chassis. The motor controller was screwed in to one of the ribs. One issue this week was the fitment of the camera. The ones I ordered have a chip in the wire which hinders flexibility. Luckily, the maximum bend rested the camera in place without needing permanent attachment. The motors had dual directional output drives that were interfering with the other components. I removed the inner drive by cutting them off.

The Zero and motor controller have been soldered and wired along with the motors themselves. I changed the GIPO ports used for wiring for cleanliness. This will require changes in the coding provided, that I will look to complete by next week. As of now, the Zero is powered by the USB output on the power bank, and sends that power to the motor controller via 5V output and ground.

I currently have the Zerobot fully assembled, sealed, and connected using VNC viewer. Live streaming to the network is working well, but it is rotated 180 degrees at this time. (Another coding task). I can access the bot from a computer without any issues, yet from my phone, it freezes after loading the camera. I am looking into the coding today to figure out the touch control and rotation of the camera. 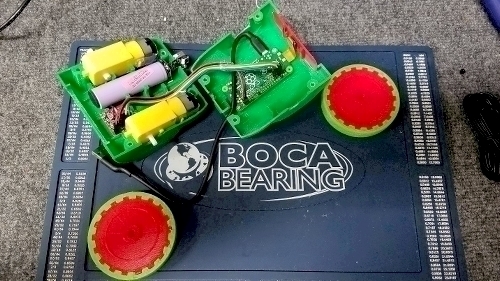 The design for version 2.0 is completed and currently being printed. I enlarged the dimensions to allow for all of the electronical components to be located on the lower part of the chassis. The upper shell will serve only as a cover. I have also allowed the battery pack to stay as a complete unit and added mounting points for the motor controller. As I test out the new platform next week, I will be looking to make final changes as I see needed.