This is the thingiverse link to the model I used: https://www.thingiverse.com/thing:2537602

A bit over 200 hours of total print time. I don’t know the exact figure, somewhat more than the Camaro LS3.

This is the hardware kit from MakerRX that is made specifically for this engine: https://www.makerrx.com/products/mrx5

The kit is about 95 dollars, and contains all the hardware you need to build the engine. All the sizes of screws and nuts, magnets, springs for the valves, steel rods, motor, power supply, speed controller, etc.

The kit contains bearings, but I left those out and used some dry Boca ceramics from stock instead.

https://www.bocabearings.com/products/smr6701c-yzz-af2-4453 (these come with oil, but I soaked them in mineral spirits and dried them)

The engine block took over 77 hours to print, and used roughly ¾ of a roll of silver Hatchbox PLA. 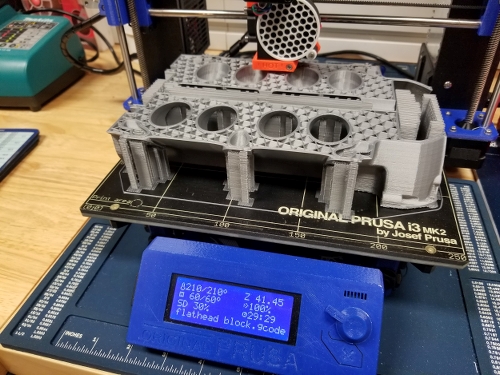 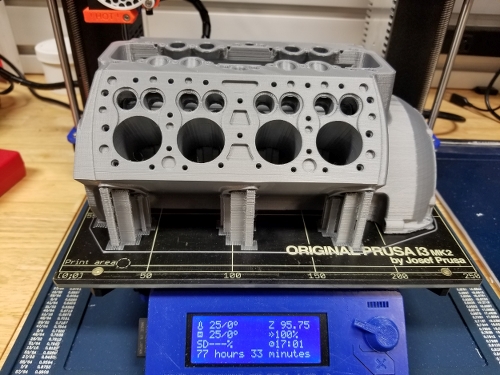 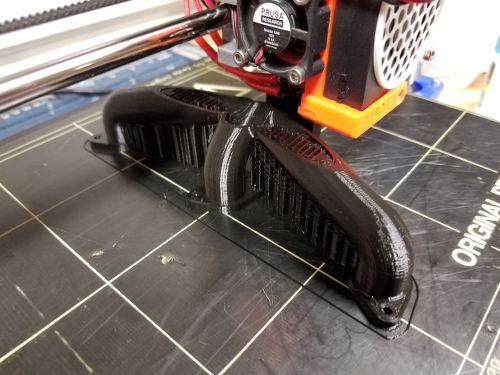 The eponymous flat cylinder heads that give the engine it’s name, printed in red PLA, took about 10 hours each. 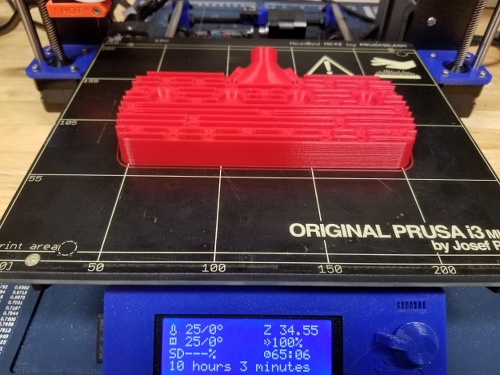 The intake manifold assembly after being put together. There are 15 total printed parts in this section. 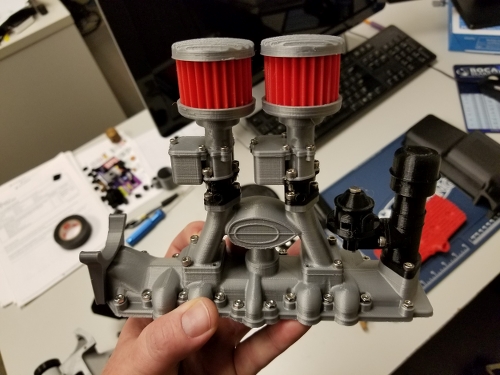 Valve assembly with valve springs. The engine has 16 of these. The valve stems are made out of 45mm machine screws which come in the hardware kit, as do the valve springs. 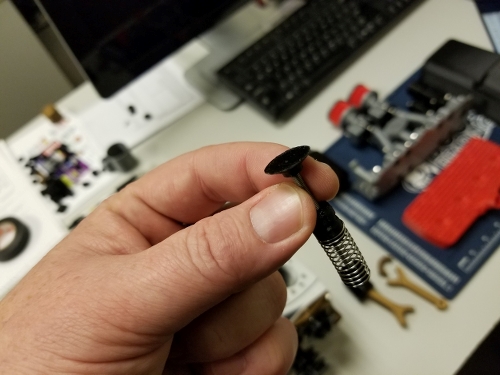 I made the connecting rods out of gold PLA. The crank is black and the block is silver, I think the color scheme looks pretty cool. 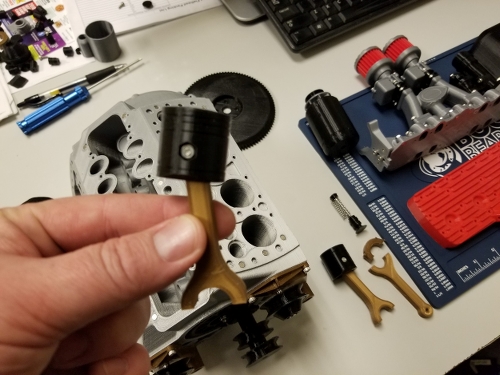 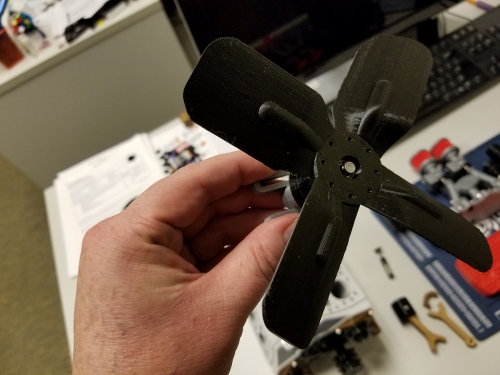 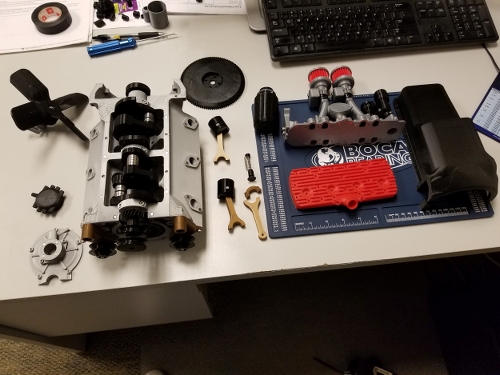 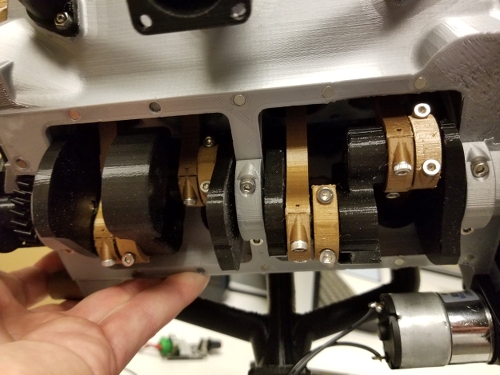 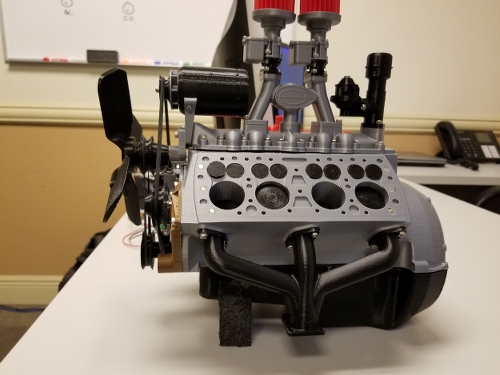 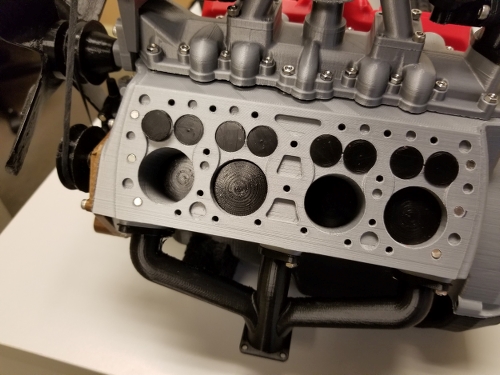 Neodymium magnets are used to attach the various components that are made to be easily removed. 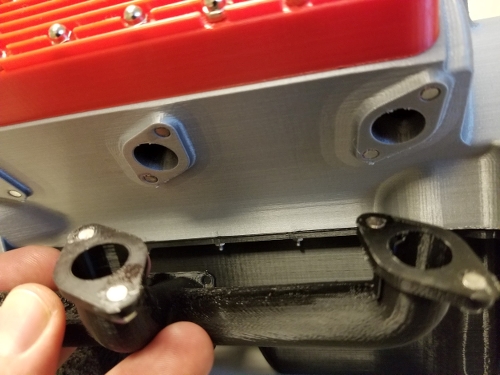 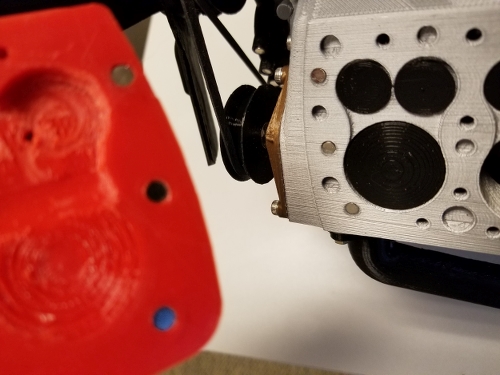 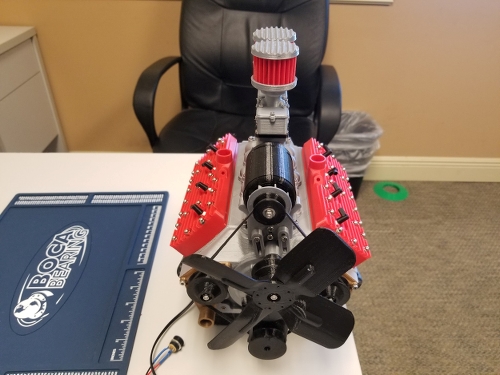 The finished engine took me about a month, working on it for a little while every day, whenever I had time. 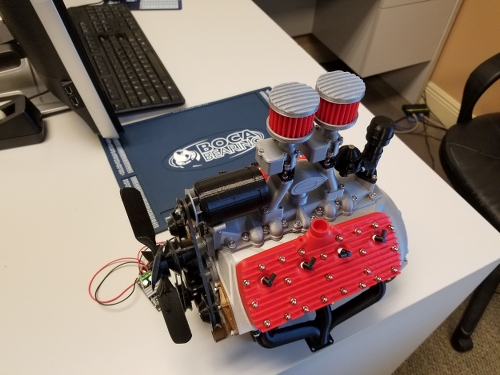 It uses a 12v power supply, a geared DC motor to turn the engine, and a speed controller. All of the electronics come in the hardware kit. 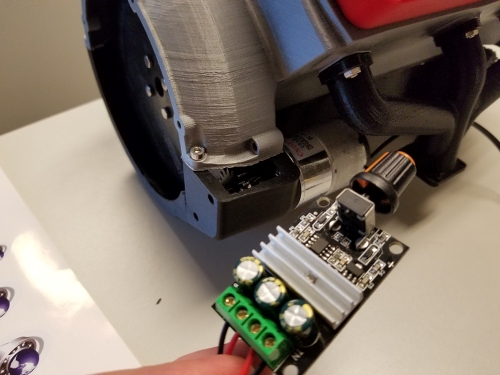 Video of the finished engine running:

Some info on the Ford Flathead V8 from Wikipedia:

“The Ford flathead V8 (often called simply the Ford flathead, flathead Ford, or flatty when the context is implicit, such as in hot-rodding) is a V8 engine of the valve-in-block type designed by the Ford Motor Company and built by Ford and various licensees. During the engine's first decade of production, when overhead-valve engines were rare, it was usually known simply as the Ford V‑8, and the first car model in which it was installed, the Model 18, was (and still is) often called simply the "Ford V‑8", after its new engine. Although the V8 configuration was not new when the Ford V8 was introduced in 1932, the latter was a market first in the respect that it made an 8-cylinder affordable and a V engine affordable to the emerging mass market consumer for the first time.”

Here is a cool video which shows an actual 1949 Flathead being started up: