Riding on a carousel as a kid was fun, sitting on the horses going up and down, riding in a wide circle as the music played. Well the Acavallo Carousel is a little different, and a little cooler in our opinion. They set their steel horses on a pirate ship, and made the whole thing able to drive along the playa at Burning Man while blaring music. Since its inception they have traveled to events across the world, bringing this engineering marvel to the masses.

Each year Quill Hyde improves the design and keeps thing running. Here was what he said about his project.

It's a work of participatory art - A Cavallo, the Carousel, is a rolling Coney Island pirate ship with steel horses galloping, a stage on the back, and shooting musical fire up above; celebrating life, art and performance along the way. An interactive, not-for-profit art experience, A Cavallo is a unique piece of public art, above and beyond the band of horses - its a roving, powered stage for circus performers, musicians, fire artists, DJ’s, aerialists, and others who want to share their talents. It re-debuts this year at Burning Man, after which The Carousel will roam - bringing art to communities around the country. What is it? The carousel is a rolling, transformative metal ship. We're remixing the materials, parts and pieces of the original carousel into a new, infinitely more flexible version, designed for ease of transport and setup, enabling it to play events and parades the world over. www.acavallo.org

I started this project in 2007, and it took me six months to design and 8 weeks to build the first version. My initial design goals were a little skewed - pack as small as possible, bolt up to as big as possible - which makes setting the ship up a five-day excursion to nowhere. It's been sitting for 4 years, waiting. I've completely reworked it to meet new design goals - travel as a self-contained gooseneck trailer, on 3 axles. Unfold to a 13' version for parades, with telescoping options for higher-clearance events. In full trim, it reaches to 38' or so. I've used the original CAD to generate the new plans, cutting up the parts many different ways until I settled on the simplest and most sensible solution. That's taken me another year or so. Now we're starting the rebuild, which will take us 8-10 weeks. 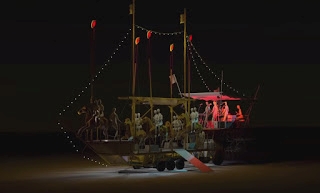 To bring a vision to life - I went to Burning Man in 2006 and saw art that really got me excited. I had a company, and built automation systems for Broadway shows. Which meant I was ready to build something big, and had a tremendous set of skills to bring to bear on the project. I had a dream of metal horses, with fire above and a stage behind, all wrapped in a ship, and rolling down an abandoned freeway in a post-apocalyptic world. And I set about designing it, raising money, and built it, because I'd seen it already, in my head. The goal of the project was to involve as many non-makers as possible (to teach metal arts), and to make a piece that would interact with as many people as possible, in a joyous way. With music, with carouseling horses, with the ship itself. Once on the piece, you're in the piece, transported to another time and place - you're on a stage, you're part of the art. And it's so much fun.

The project is meant to inspire others to make, ultimately. I find, in our rapidly technologizing culture, that many people have never been exposed to the process of bulding things, never been inspired sufficiently to learn to drill holes, make up bolts, design mechanical systems for no reason. I hope to do that. My dream is for this art project to provide the backbone for a nonprofit educational organization, teaching making skills and building interactive public art. 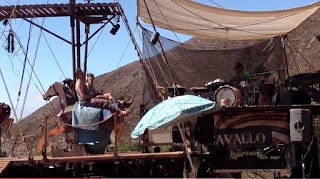 It's a unique take on the carousel, for one - life size horses, on a ship, going in a straight line while the horses go up and down underneath you. So much more pleasant than the spinning kind. And the stage, too, for performers, and the horses, and the attention to detail throughout.

There are rod-end bearings everywhere (in all the suspension swingarms, the horse crank-stabilizers) and various other linkages. The horses themselves are supported at the bottom by a self-aligning 1-5/8" cast-iron housed flange bearing. There are also, of course, the bearings in the motors, the gearboxes, and in all the hubs of the many wheels. 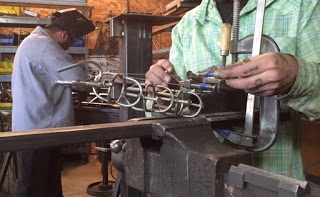 That it's for them, that when they see it, they're welcome to come onboard, to ride the horses, to listen to the band, to play with the flame effects. They're even welcome to write their name on the piece, tag it, make it theirs.