A human powered helicopter! It seems like a crazy idea, or something out of Leonardo Da Vinci's notebook. But that is what one team set out to accomplish.

In 2012 Team Gamera entered their project into Boca Bearing's Innovation Contest and quickly captured the imagination of the Boca Bearing team, and inspired engineers everywhere. 35 years ago, the American Helicopter Society (AHS) put up the Sikorsky Prize. the prize requirements are to hover for 60 seconds, momentarily reach an altitude of 3 m (about 10 ft), and stay within a 10 m X 10 m area during flight. Team Gamera consists of engineering students of all levels, Freshman through PhD, at the University of Maryland’s Clark School of Engineering and Alfred Gessow Rotorcraft Center.

Here was what Team Gamera had to say about their project.

The Gamera project aims to design, build, and fly the first human powered helicopter to meet the requirements of the 32 year-old American Helicopter Society (AHS) Sikorsky Prize. The prize requirements are to hover for 60 seconds, momentarily reach an altitude of 3 m (about 10 ft), and stay within a 10 m X 10 m area during flight. Since the challenge began in 1980, no individual or team has come remotely close to meeting these requirements, despite many serious attempts. Several in the rotorcraft community have said the requirements are nearly impossible. In August 2012, the Gamera team was able to accomplish hover durations of 65 seconds and altitudes of 9 feet (2.7 m), separately. These achievements have erased many of the doubts in the community, and raised the level of excitement surrounding the challenge. Team Gamera consists of engineering students of all levels, Freshman through PhD, at the University of Maryland’s Clark School of Engineering and Alfred Gessow Rotorcraft Center. The purpose, beyond winning the prestigious AHS Sikorsky Prize, is to push the envelope of lightweight design, to provide a unique educational experience for all the students involved, and to inspire the next generation of engineers.

The project started in Fall 2008, and it took 2.5 years for the first vehicle, Gamera I, to be designed and built. Between May and July 2011, Gamera I reached a maximum duration of 11.4 seconds and only about 1 ft altitude, which was a US national record at the time. During the Fall 2011, we went back to the drawing board, putting all the engineering lessons we had learned on Gamera I to use. The result was the design of Gamera II, which was a significant improvement. Vehicle weight was reduced by 30 lbs from 106 lbs to 76 lbs, while rotor blade aerodynamics were improved, resulting in 40% less power being required from the pilot. Extensive human power research was also conducted, showing that having the pilot pedal with hands and feet simultaneously increases power output by about 20%. As of August 2012, with Gamera II XR (Extended Rotor Radius), we have achieved hover durations of 65 seconds, and altitudes of 9 ft in separate flights. The project is ongoing, and we are currently working towards implementing a control system to hold vehicle position within the required hover area, as well as combining the 60+ second flights with the 10 ft altitude to win the 32 year old AHS Sikorsky Prize!

The project’s goal has always been to progress towards meeting the requirements of the prestigious AHS Sikorsky Prize (hover for 60 seconds and 10 ft altitude). The secondary goals were to enhance the engineering education of students at the University of Maryland and inspire the public (particularly future engineers). We want to push the envelope of lightweight design and accomplish what was once considered impossible.

The human powered helicopter is not meant to be a practical aircraft, and will not be in stores near you soon. But the Gamera project is all about tackling an “impossible” challenge, and in doing so encourage the next generation of engineers to dream big. And not only dream big, but make it happen!

A pedal-powered quad-rotor the size of a Boeing 737 airplane is pretty unique! Our commitment over the years to carefully researching and improving each aspect of the vehicle has paid off with an enormous leap in capability over previous designs, putting the AHS Sikorsky Prize finally within reach. 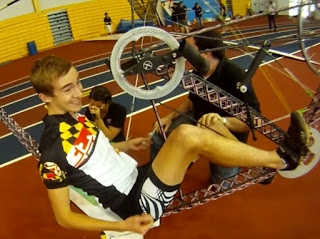 August 2012, the Gamera team was able to accomplish hover durations of 65 seconds and altitudes of 9 feet (2.7 m)

The Gamera II XR helicopter uses ceramic bicycle bearings for the hand and foot cranksets, as well as steel needle roller bearings and steel needle thrust bearings for each of the four rotor shafts. There are also a variety of smaller roller radial bearings being used in idler pulleys for transmission string re-direction and in idler sprockets for chain tensioners in the cockpit. Steel needle roller bearings are used on the flywheel shaft, which rotates at 800 RPM. There are PTFE plain bearings in the hand grips as well. In a weight-critical application such as this, the performance of these bearings has proven to be well worth the added weight.

Human power is 10 times worse, per pound, than a steam engine! While it seems conceptually simple, constructing a human-powered helicopter to lift off the ground for even one second is a huge challenge. Going from 1 second to 60 seconds is an order of magnitude greater challenge, and similarly with going from 1 ft to 10 ft altitude: the difficulty increases exponentially.

Bearings in action! A small part of something amazing.