So as I talked about in the last post there are a few things that needed to be done to the car before it is ready to race up in Orlando. We read over the power wheels racing rules and found some things that we needed to comply with. First thing was the bumpers. We needed bumpers that covered 75% of the vehicles front and rear and covered a 1" space between 4-6" off the ground. So we ordered some aluminium tubing from Mcmaster Carr that already had holes in it and they even gave us the option to buy hardware to join them. After the tubing came in I took the stuff over to FAU and cut it to size on a circular saw and assembled it. 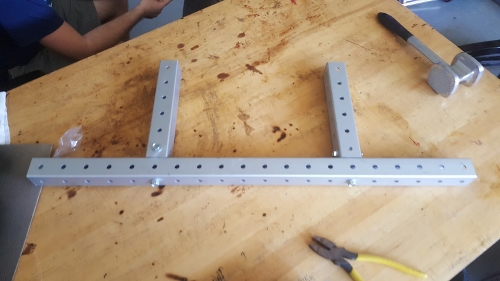 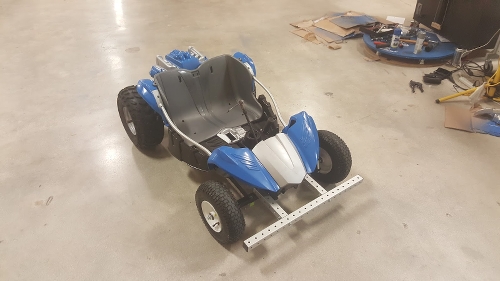 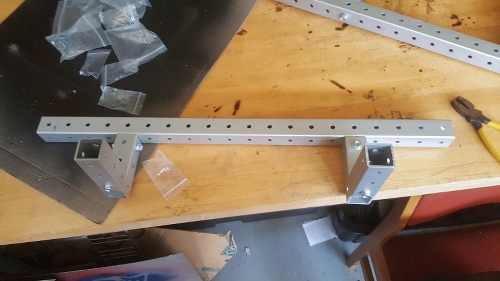 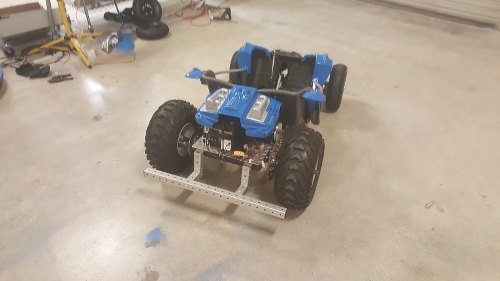 Then we wanted to make sure that it wasn't going to tear up other people's cars while it was on the race track to we opted to just buy some pool noodles and tie then on the bumpers. In order to keep the colors right though we ended up painting them at maker faire. We also added some stickers to the car to make it fit our theme of hitchhikers guide to the galaxy, with the number 42, since it is the answer to everything. 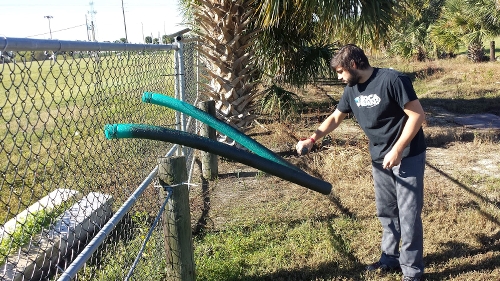 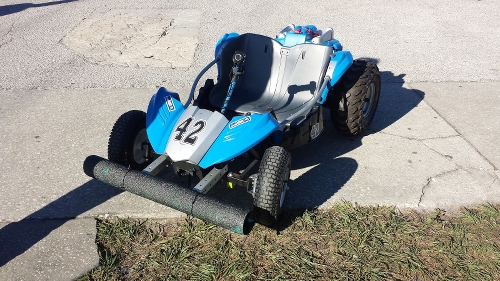 The next update was the steering. We had a pvc steering wheel on there but there were a couple of things about it that weren't as good as they could be. For one the pvc is not real strong and could break. Also the hole through the steering column is not the same as any size screw you can buy at 0.3340" so no matter what bolt went through it there was some play in it. And finally, the steering wheel design made it tough to sit in the car because it took up a lot of space. Really the only way to get your feet inside of that thing is to pull your knees to your chest and if the steering wheel is there there would be no room for your knees. We decided on just making a joystick for the steering. We bought some aluminum rod, a smaller stainless steel rod, and a 10-24 Wingnut then I took the stock to the lathe. Here is what we were left with. 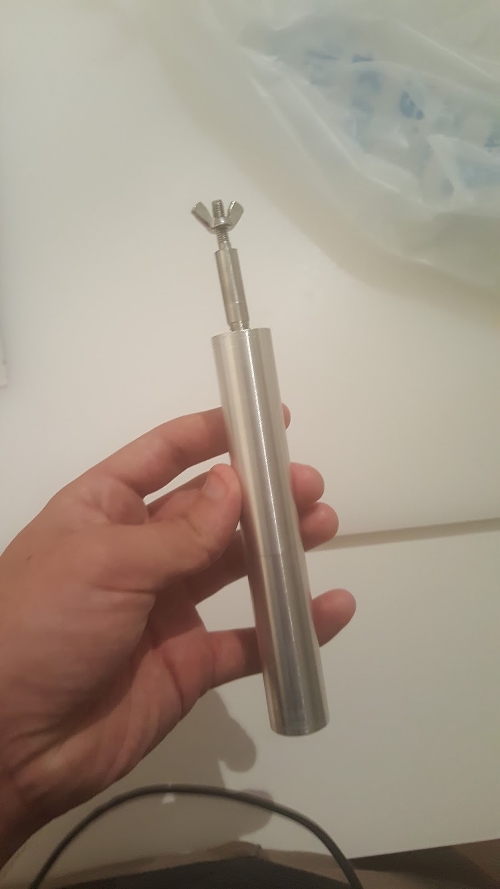 So the small stainless part was machined so that it would barely fit through the hole with about 20 thousands of an inch clearance. Then I 3D printed some couplings that would fit tightly around the shaft of the car and would house the aluminium rod and the wingnut. After we printed those the joystick was assembled and we wrapped it with some bike tape for grip. But when we put the throttle on there the aluminum rod was a little too big and tore up the hall effect sensor in the throttle so we had to order a spare and print a coupling from the shaft to the throttle. This kinda worked out for the better because the longer the joystick the easier it should be to turn. 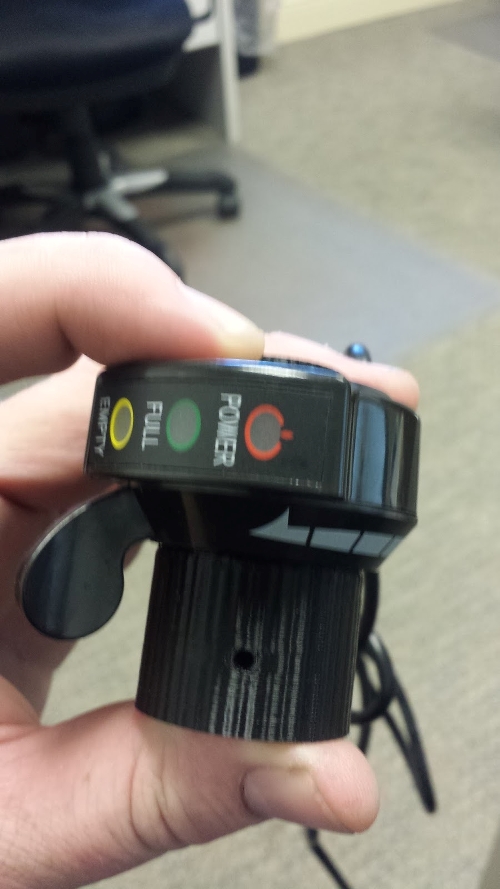 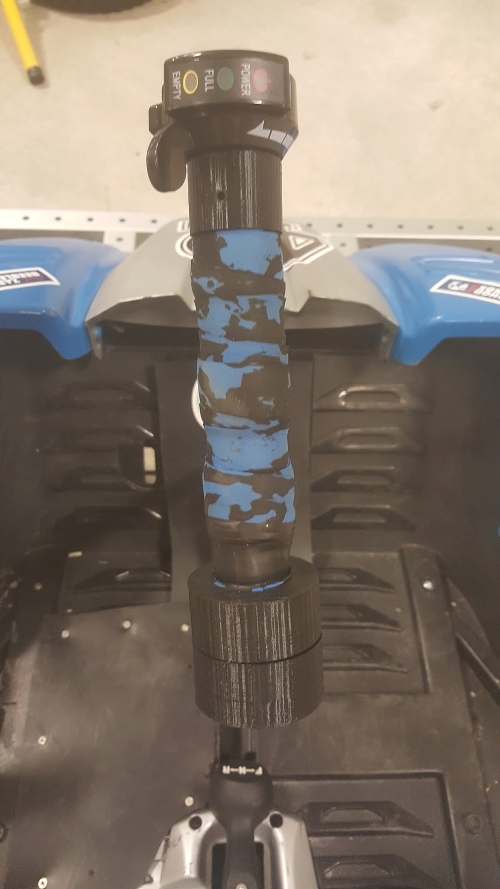 In the picture above you can see the forward neutral and reverse switch that Bryan added. He found one that used to be on a golf cart for pretty cheap and we wired it up so that the motor leads from the speed controller ran into it and then to the motor. It basically works as a mechanical switch so that the voltage applied to the motor is either forward or reverse or the leads aren't touching.

The last two things that we added were the kill switch and the fog machine. We 3D printed a coupling to go from the kill switch we bought so that it would be secure on the back of the car. The way it works is when the red key is in there is connection and the vehicle will operate. When the key is removed the speed controller will not allow any voltage to the motor. The fog machine is a dry ice container under the 42 on the front of the car and has a cap where you can add hot water to get the smoke going. Then the pipes run out to the back where the smoke would come out. I do not have any video of the fog machine yet but I will get some to post soon. 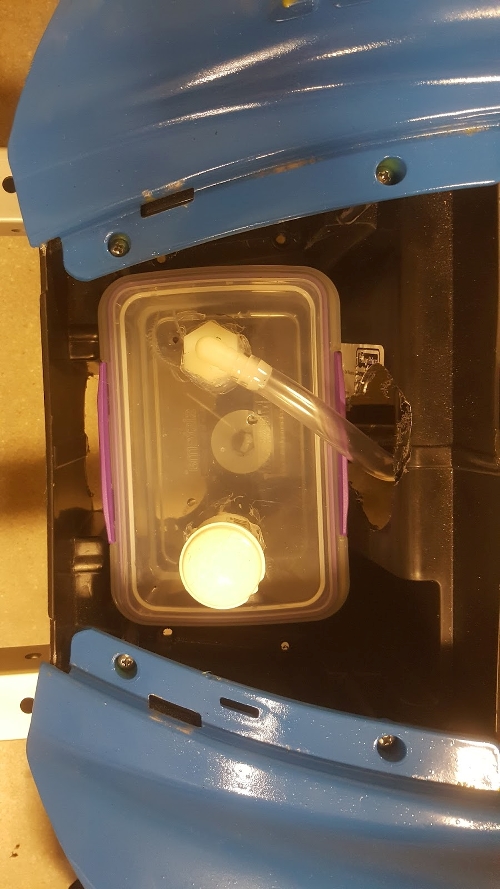 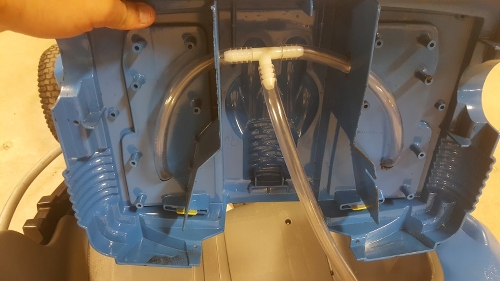