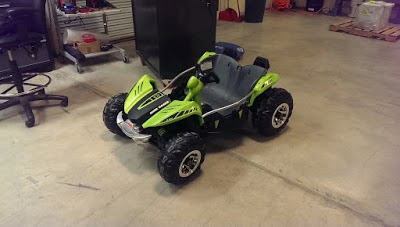 The next project for Boca Bearings will be to make a regular Power Wheels into a Racing Power Wheels to participate in the Power Racing Series. The Power Racing Series is a series of races where teams race each other with power wheels that they have modified to go much faster than their stock speed. The series also includes an endurance race of 75 minutes. It's a series where people can learn new things and skills and to simply have fun. 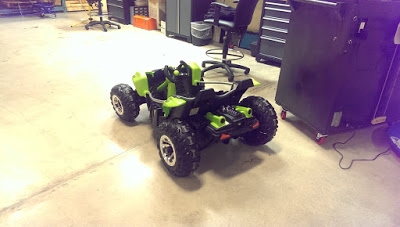 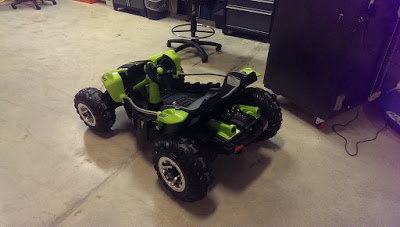 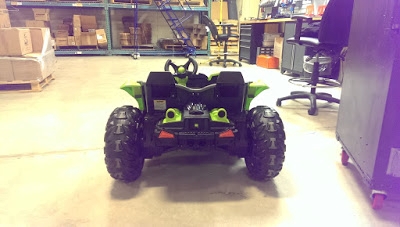 The steering on the dune racer is not quite so sharp. The Power Wheels has a large turning radius which isn't really ideal in the racing series since there are some quick maneuvering to be done. The Power Wheels was quite slow when the staff of Boca Bearings were testing it out. Later on we found that the power wheels can go a bit faster. Maximum speed was 5mph, according to the Power Wheels product description on walmart.com. At 5mph, the Power Wheels was more fun to drive.

To better understand the frame of the dune racer, me and Bryan C. decided to take apart some of the plastic pieces starting with the front and to better see the steering setup. 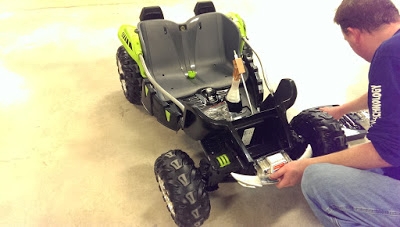 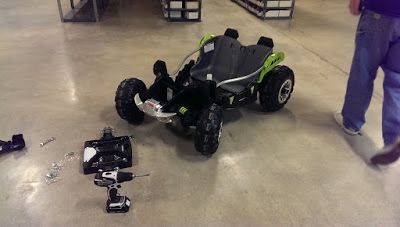 We ended up taking apart more than we planned to. The plan was to just to remove a steering cover at the bottom. But, we ended up just going for it and decided to go all the way. So we decided to look what motors were driving the dune racer. We removed the coverings in the back of the dune racer and found two motors, one for each rear wheel. 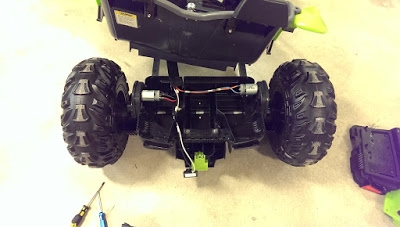 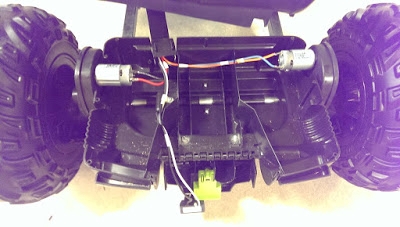 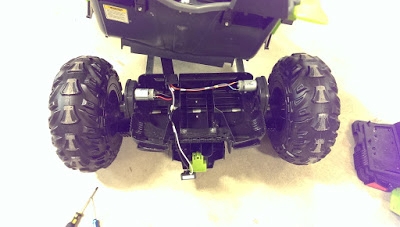 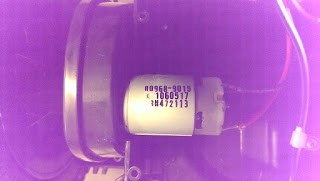 The motors were a lot smaller than I expected and I also thought that maybe only 1 motor was in use for this dune racer. The motors seemed like RC car motors to me. By looking at the setup of the current rear drive, I may just simply remove the whole rear section like the motor housing plastics, gears, and the wheels. I will replace it with a new axle that will go from the left end to the right end of the dune racer and somehow create a motor mount nearby that will drive the axle with the use of sprockets and a chain. The new axle will probably be connected to the existing steel tubing going from the front of the Dune Racer to the back. You can see the steel square tubing below. 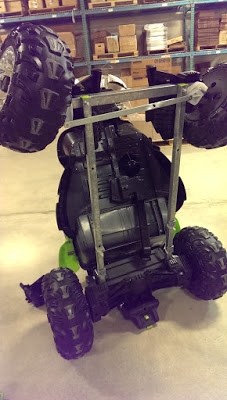 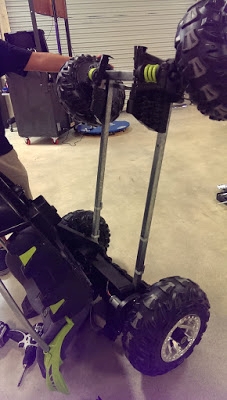 This is the first Power Wheels project that I will be doing so I am new to setting up a Power Wheels car to race in the Power Racing Series. I'm also new to electric motors and speed controllers. So I'm learning as I go with this project and from what I learn from this project, I will then be able to create a new better setup in future projects that involve electric motors.

The first thing I did was to research motors that I can use for this project. I found motor kits at: http://www.monsterscooterparts.com/. Motor kits can simplify the process since they include a controller that is compatible with the motor as well as a hand throttle to control the speed of the motor. There I found several motor kits. The first motor kit that I was considering was a 36 Volt 1000 Watt motor kit. http://www.monsterscooterparts.com/36-volt-1000-watt-motor-controller-throttle-kit-standard.html 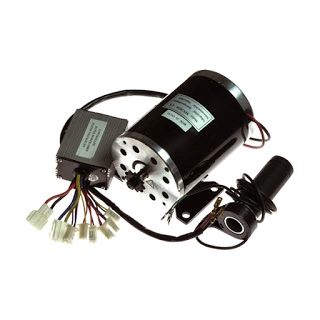 But I later decided to go with a 24 Volt motor instead to reduce the number of batteries required to run the motor during the race and to cut costs. So one 24 Volt motor kit I was looking at was the 24 Volt 500 Watt motor kit. http://www.monsterscooterparts.com/24-volt-500-watt-motor-controller-throttle-kit.html 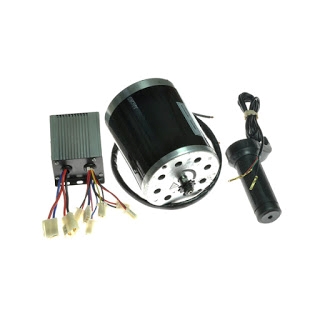 I later found out that these two motors were the same model. So I am not sure if they are exactly the same motors just paired with a different speed controller that dictates the current supply to the motors and thus change the wattage of the motor. I looked online for information on the 24 Volt motor and what kind of speeds people have been getting from these motors. I found online where someone stated that they used a 24 Volt 500 Watt motor that carried a 235lbs man at 22mph on flat ground. To me, that was pretty impressive and 22mph sounded reasonable. http://www.electricscooterparts.com/madewithourparts.html

Also at that same link above, a Power Wheels team used a 24 Volt 500 Watt motor kit that won them the 1st place at the second annual Power Racing Series in 2010. So this gave me some confidence in selecting this motor kit. But later on I found out this team won by points earned by fans in the crowds of the races.

But some of the staff here at Boca Bearings wanted a Power Wheels that will be fast. So I decided to look into other motor kits that still use a 24 Volt motor but offered a higher wattage. Consequently I looked into a 24 Volt 650 Watt motor kit. So this kit provided 150 more watts, a 30% increase in power from the 500 Watt motor kit.

Where P is power in watts, I is current in amps, and V is in volts. We have P and V for each motor kit, the watts and voltage. So to calculate the current, I, you just need to solve for I in the above equation and get:

So with this equation solved for I, I made the following simple chart displaying current draw and the cost of each motor kit.

I looked at 3 different 24 Volt battery packs: 10Ah, 12Ah, and 15Ah battery packs. Ah stands for ampere-hour. Ah will be needed to calculate run times for each different Ah. Ah is calculated as follows:

Where Ah is ampere hours, I is current, and t is time in hours. So the above equation solved for t to find run time in hours is:

In the chart above I included the cost of each battery pack and the calculated run time from the current draw that was calculated in the previous chart for the 500 watt motor kit. I also included the required number of battery packs to complete the enduro race. The enduro race is a 75 minute long race where swapping battery packs will be permitted. For the required packs, I just rounded the number of packs required up to the next realistic number of packs possible. Another thing to consider is that there will be races that will be about 20 minutes long and at these races no battery swapping is allowed. Therefore I must also make sure each battery pack will give enough run time to complete the 20-minute races. From the chart above, I concluded the 10Ah battery packs will be the best choice since it gives the most run time per dollar.

From the above chart, the 10Ah battery packs were the best for run time per dollar. They gave more run time than the 12Ah at a lower price and their total run time with all the sets wasn't far below the 15Ah which would have cost $100 more. But one thing to consider was the run time. The 10Ah battery packs provided a 22 minute run time which is really close to the 20 minute race time. There could be a risk that the batteries may drain before the race is over since current isn't really constant. Since it isn't constant, we may also obtain more run time. But it isn't guaranteed or known for certain. Also, the current draw from the motor may be different from the calculated current draw since the motor controller has a rated current of 30 amps. It was decided that 10Ah shouldn't be chosen. In the end, we decided to go with the 15Ah because of more run time to be safer in the 20 minute races and to gain more run time overall in the enduro race.

So now to give an estimate of costs, 3 charts were formed to reflect 3 different possible setups. The first being a good setup with the 24V 500 Watt motor kit. 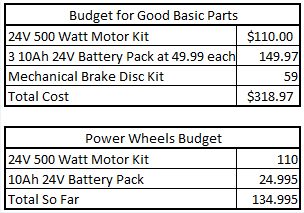 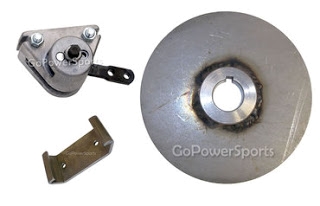 The next two charts are for the 650 watt motor kit with 12Ah battery packs which I have titled as better parts because of the increase in wattage. 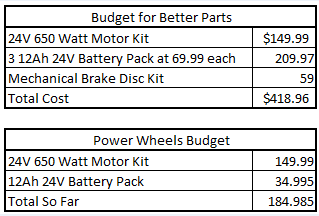 This setup gives about $315 left to buy other parts. So it's $50 less than the previous setup to buy more parts and it actually costs $100 more. The last two charts are what I titled as the best parts. Although more expensive, it provides the best run time because of the 15Ah battery packs along with the 650 watt motor kit. 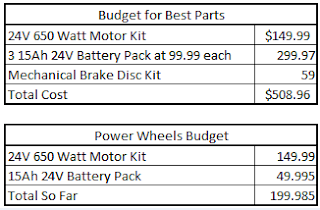 The actual cost for this setup is about $510, which is close to $200 more than the basic setup. With this setup, according to the Racing Series rules, we will then be at about $200 in in the $500 budget. This gives us $300 left to buy parts which I think should be enough.

I have already done a rough estimate of the cost of the Dune Racer in accordance to the rules and I calculated a cost of $305. This cost was with the 500 watt motor kit. But I believe we are still good in going with the 650 watt motor kit and the 15Ah battery packs. The next parts to be ordered will be carefully selected to avoid crossing the $500 limit.

At this time, the 24 volt 650 watts motor kit will be ordered along with 3 15Ah battery packs. More research will be done in selecting a brake kit, axle, sprocket, and a steering system. I might hold off the steering until later and maybe work on getting the motor on with an axle and sprocket to be able to test the speed of the Dune Racer then. Also, wheel selection must also be done. More updates and blog posts will be done as more progress is made.