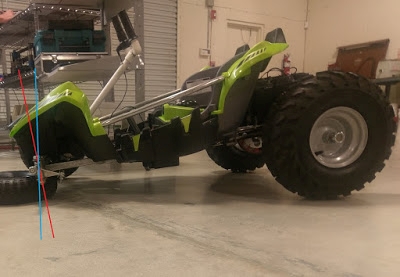 Below is a diagram of positive and negative caster that I found online.

Negative caster causes a vehicle to become unstable at higher speeds while positive caster causes a vehicle to be more stable at higher speeds. But having too much positive caster can cause the Power Wheels car difficult to steer at higher speeds. The current caster on the Power Wheels has a caster of -7 degrees. I measured it by using a level as my vertical axis and measuring the angle of the spindle bracket from the level. From doing some online searching, I found that a good amount of caster is +10 to +15 degrees. These numbers were for gas powered go karts. I found most of this information from diygokarts.com. There I found caster can be generally set to 10 to 15 degrees of positive caster. 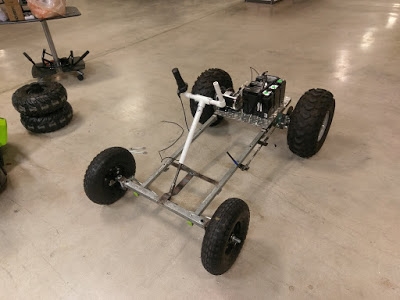 I will first need to correct the caster to give me neutral caster (no caster angle) on the steering axis. From there, I can then add positive caster. The way the first brackets were welded onto the front bar were to have no caster at all. But when the front bar is mounted onto the frame, it becomes negative caster. The larger wheels in the back causes the frame to have a tilt and this causes the front brackets to have negative caster. If both the front and rear wheels were the same size, then the Power Wheels would have no caster.

So to work on this I needed more square tubing to weld new brackets onto it. Luckily I still had another square tubing that we had used for the rear extension of the frame. Below is a picture of the square tubing when I was beginning to prepare to cut it to the same length of the original front bar. The bar had some rust but I think it'll be ok. The bar still feels sturdy. 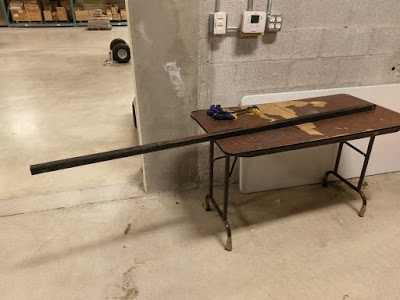 I first had to cut off the end because the end had some indentation and a hole as well. So I clamped the square tubing down and got out an angle grinder from Harbor Freight to do the cutting. I also got a face shield from Harbor Freight. I'm no professional machinist so I wanted to be as safe as possible when doing the cutting. Below are pictures of the square tubing clamped down and the tools used. 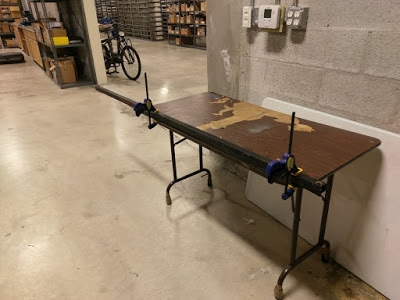 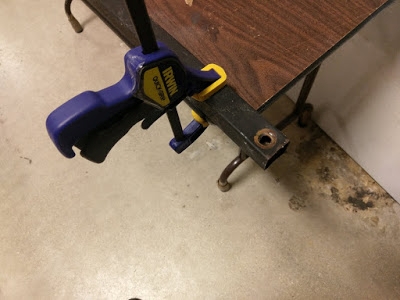 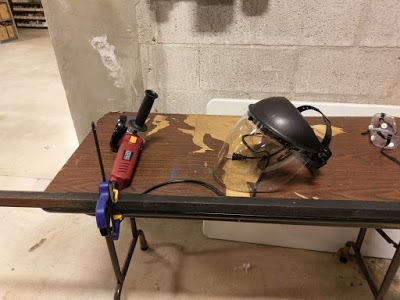 Below is a picture of the part that I wanted to cut off and how the final square tubing looked like afterwards. 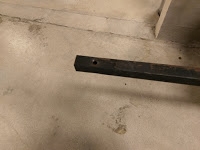 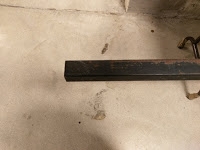 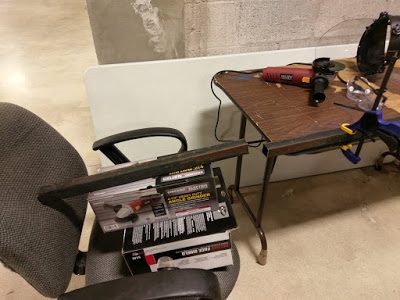 I then compared the newly cut square tubing to the original front bar on the Power Wheels as shown below. 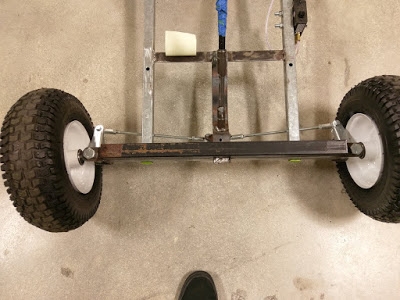 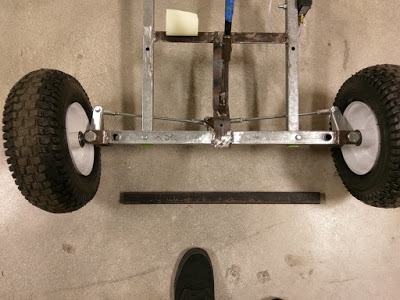 The newly cut bar is pretty close in length to the original front bar. This was good so I can still reuse the same tie rods that were cut to accommodate the length of the original front bar. The next thing to do was to weld on the spindle brackets on the ends of the bar with some positive caster to it. The welding will be done again by John from Small Engine Rescue. Below is the bar with brackets and a drawing. 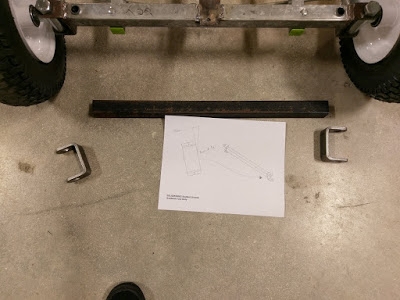 Below is the drawing from the picture above. 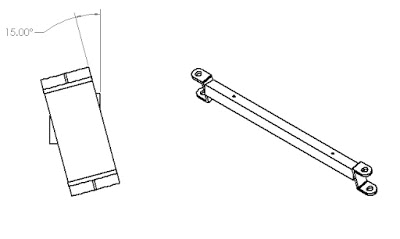 So from the drawing above, the brackets will be welded to the square tubing with a 15 degree angle from the vertical axis to give it some positive caster. When it will be installed on the frame, the actual effective positive caster will be 8 degrees because 7 degrees of it will actually make the caster neutral to cancel the negative caster created from the lean of the frame.

If the frame is to be ever leveled out by using same size tires for the front and the back, then the effective caster will then be 15 degrees. 15 degrees of positive caster is the max recommended caster for go karts while 10 is the recommended minimum. But I think 8 degrees might suffice, or at least be a much better improvement over the negative 7 degrees of caster. 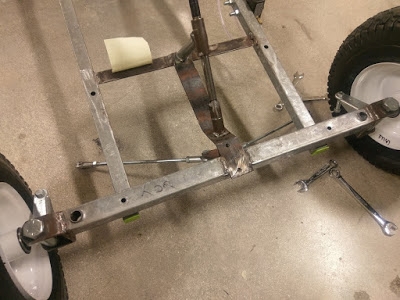 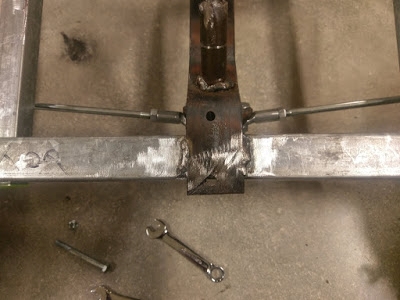 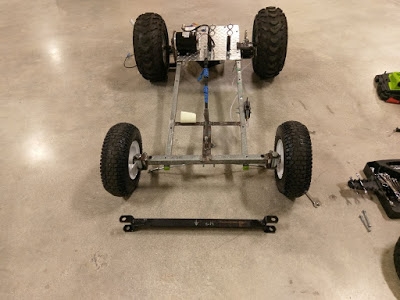 So I went back to the frame and began to start cutting of the welds of the flat bar with an angle grinder. Below is a picture of the flat bar finally removed from the front bar. 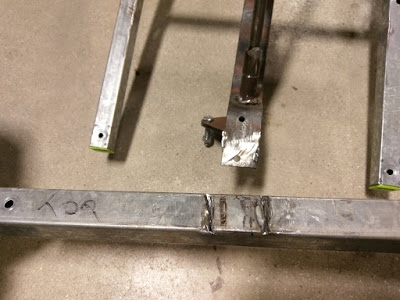 I took some pictures to compare the new front bar to the original one. They're pretty close in length. 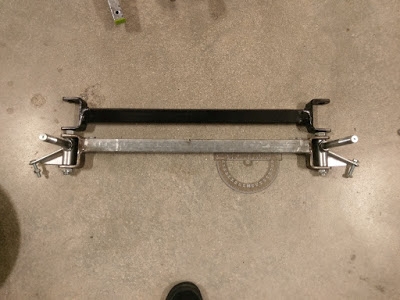 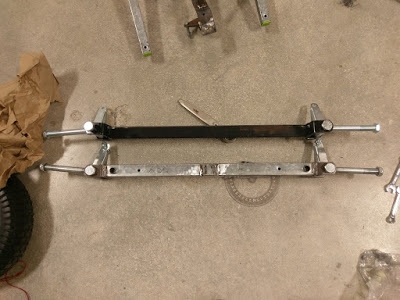 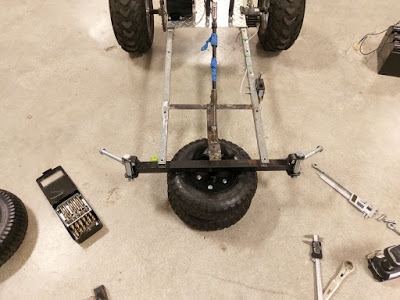 I first made sure that the distances on each side of the bar from the frame were approximately the same lengths. Then I proceeded to drill the holes into the front bar. Below is a picture of the front bar with the newly drilled holes. 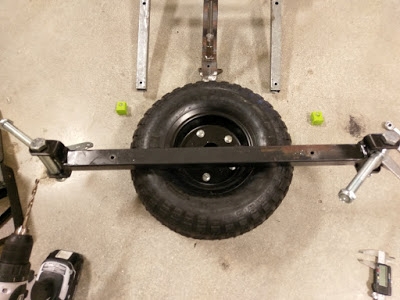 Then I bolted it the frame. 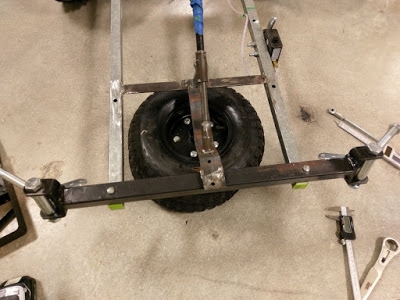 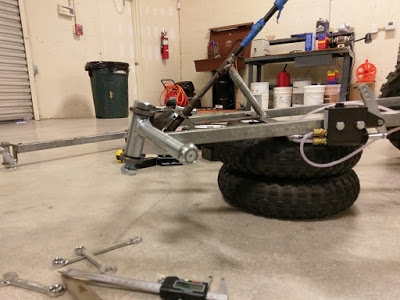 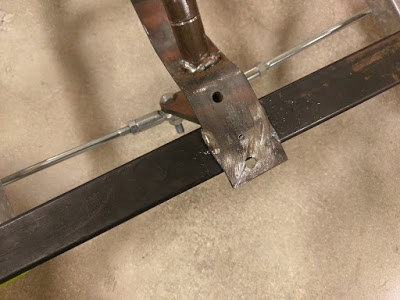 So I borrowed some cobalt based HSS drill bits from Small Engine Rescue to complete the drilling. I then bolted the flat bar to the front bar and I was done with the steering after adjusting the toe to accommodate the new front bar. 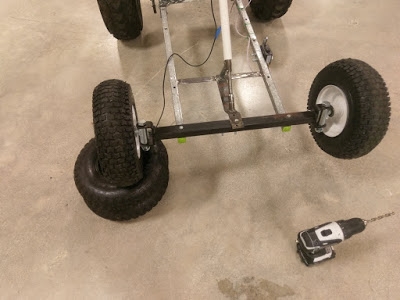 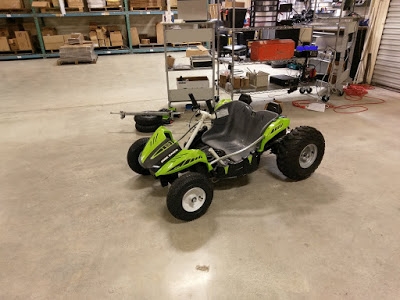 I had also decided to replace the chain since the old one was binding up at some parts and was probably on too tight. So I installed a new one with some slack to it. The first chain was on too tight that there was always a point where the motor had to work much harder to be able to rotate. This caused the motor to heat up during runs. I was worried that this may damage the motor in the long run so I decided to install a new chain and let the chain have some slack. I may need to go back and adjust the tension because the chain may be on too loose right now.

So I went to test the new steering around the Boca Bearing building and found that the Power Wheels was now stable at higher speeds. This time I can push the Power Wheels to full throttle without having to worry that I may lose control. So the steering instability has been fixed. More improvements will be done to car in the near future and the project will now be taken over by one of our recent interns, Michael. He will improve the frame and make it much sturdier. He may redesign and remake the whole frame to occupy space more efficiently. Thanks for reading!