This week in the shop I focused on the Candy Sorter. When we last left the project, I had designed a PCB to be manufactured and early this week it arrived. All the boards look great and I was very surprised how quickly they arrived considering the last boards I ordered took about a month to arrive. 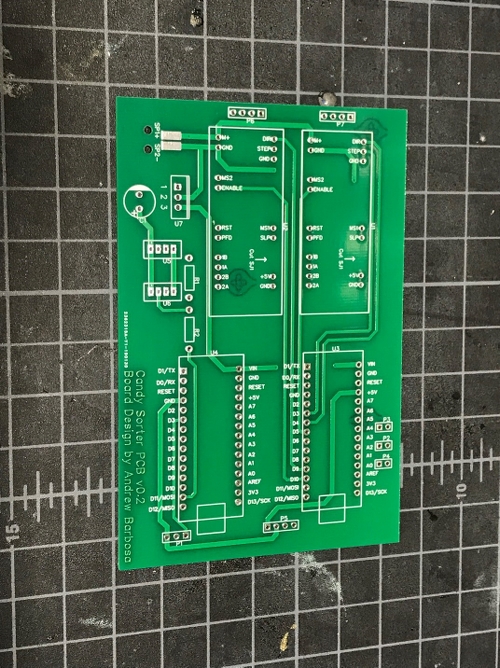 I took my time as I carefully soldered all the headers and other components on the board. I quickly noticed that there were several mistakes on the board. First and foremost, I used the wrong connectors for the LED strips I’m planning to include (parts U5 and U6 near the bottom). Second, I wanted to use buttons with LEDs and they require five pin connectors not two (P2 and P3 at the top). Finally, the power in (on the far left) are too close together and should be spilt further apart.

Those things aside, all the connections on the board seem to be correct. I was able to connect the steppers to the board, along with the drivers and Arduinos, plug in the power connector. After programming the Arduinos I they began to spin. Without having everything plugged in and looking at the serial output I don’t fully know if everything is behaving correctly yet but having the motors spin gets us most of the way there. The next steps are to verify the functionality of the board by looking at the debug output on my computer and make a new version of the board with the changes I listed earlier. I’ll also be rerouting the board to see if I can clean it up a bit more. 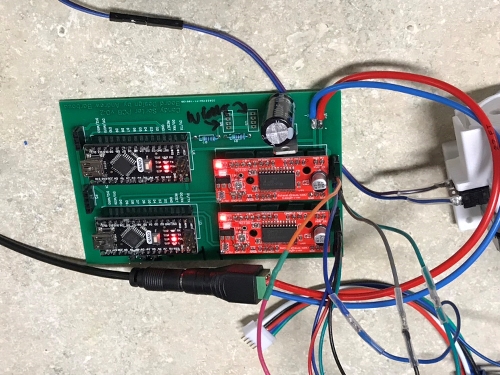