Throughout this week, I continued to work on the bearing comparison tower project, visualizing the differences between four types of bearing materials from Boca Bearings. From the first prototype in the last blog post, the design has changed a good amount as to counteract issues that came through testing. One issue I noticed is that through the initial gear ratio, the top gear would not free spin as long as I had hoped as the gear ratio decreases from the motor to the top gear, lowering RPM. To work around this, I decreased the width of each gear and used stacked gears to transfer a high gear ratio to the top wheel.

The bottom gold gear connected to the coupler and motor is turning a gear with a much smaller diameter behind the red wheel, causing the large red gear in front to spin faster than the gold gear. The same gear ratio is then used again as the large red gear turns a small blue gear behind the blue fly wheel at the top. By scaling the gear ratio up, the top flywheel will wind up more and be able to free spin longer once the motor shuts off.

Through the help of one of the fellow interns, we were able to create a working circuit board utilizing an arduino nano and circuit board. The code for this project was fairly simple as it followed the same principles as using a push button to control a LED light. The Arduino is attached to a breadboard allowing for easily interchangeable connections as we found a working design. Knowing that the code and the circuit works, we have ordered a custom Printed Circuit Board (PCB) designed specifically for this project's needs. The arduino nano will be secured to this board to control the system, requiring a smaller housing for the electronics because the PCB is a much smaller board than using the entirety of a breadboard.

Once I assembled all the parts with the gears, bearing, and motor, I noticed that the tower of the base began to shake under the stress made by the fast spinning gears. To hopefully extend the project’s shelf life, sloping supports were added to both sides of the tower to better stabilize the system. I believe that once all four towers are connected to each other, there will not be as much movement within each tower. To connect these towers, the sides of the bottom base platform have holes and will be connected using small pegs, similar to some DIY home furniture projects. I may use a small amount of super glue to fixture the pegs into place to prevent the bases from separating when each of the four motors are turned on.

As this project is utilizing four of these towers and four motors, I have to ensure that I alternate the direction of the motors spin and orientation of the one way bearings within the coupler piece to avoid the moment of inertia created by the four systems spinning in the same direction. By alternating the motors, the moments of inertia cancel each other out and will hopefully prevent the base from shaking and rotating.

At this point, it seems that most of the design work has been completed except for each tower's name plate indicating the type of bearing. Now all there is left to do is wait for the PCB to be shipped so I can solder the motors to the board to connect to the arduino and print any remaining tower bases, pegs, and gears. This project has gone exceptionally well and I am very hopeful for the outcome of the final product. 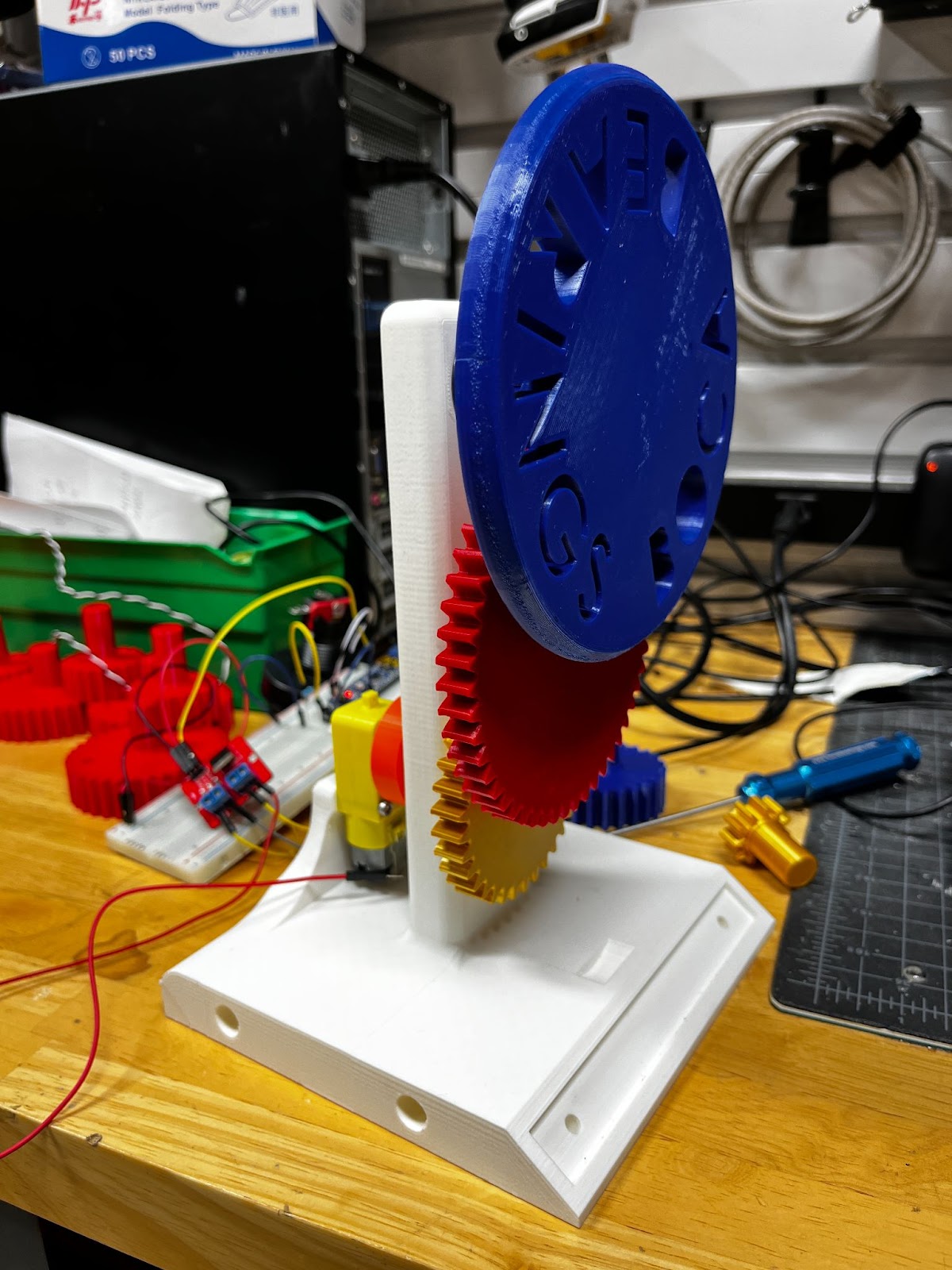