Throughout the week, I have continued to print remaining parts as well as work on the electronics for the project as a whole. As of now, the final tower base is printing after one of the towers failed printing last weekend. I believe there might have been some errors in the file that is sent to the printer to carry out the print. Though unfortunate, this was not a huge loss as the print stopped halfway through, allowing for less filament to be wasted. As each base prints, I have been adding the bearings to the towers and setting the top flywheel and middle gear to make sure that the gears are enough distance apart where they do not create too much friction but not far enough as to not touch.

There have been some errors, however, while printing the middle gears as well as the mini gear that attaches to the middle gear. These issues range from slight warping of the gears, cosmetic differences, and unfinished prints. Despite this, I have been able to print out four middle gears in white ABS plastic that all seem to be working correctly. To fix the warping and cosmetic issues, I have been lightly sanding the parts to get clean corners on the gear as well as using a white paint marker to cover up any spots.

As for the bottom gears, I had to completely reprint them as they had all broken through testing and just the sheer force of having to separate the parts. To hopefully avoid this issue again, I added more shells to the perimeter of the gears as well as a denser infill, ideally leading to stronger bottom gears as they are taking on a good amount of torque being the drive gear.

I have also made slight advancements to the electronics of the project but I am waiting for all the bases to be printed to finalize any of the wiring as the tower on the opposite end of the electronics housing will need extra long wires. Within the electronics housing, the project will have a 9 volt battery as well as being wired in through a plug to the wall. By having these two separate sources of power, the motors should be able to work even if it cannot plug into a wall outlet. I also was able to solder a power switch into the circuit to prevent unwanted energy flow even when it is plugged in. On top of the housing, I am using a large pinball machine button that was leftover from a previous project.

Attached below is the in progress look of what the project should look like, except for a tower and some gears. Now that three of the bases are printed and I can see them side by side, I am extremely pleased with how this project is coming out. Ideally, I see this project being finished as early as next week because there is not much else to do than wait for parts to print and finish the electronics. Overall, this has been a very trial-and-error centered project, having to find working gear ratios that would give the effect of the flywheel, creating a base that could withstand the fast spinning motors, as well as developing a circuit specifically for this project. This has definitely been a great learning experience for me and I haven much more confidence in my CAD skills now. 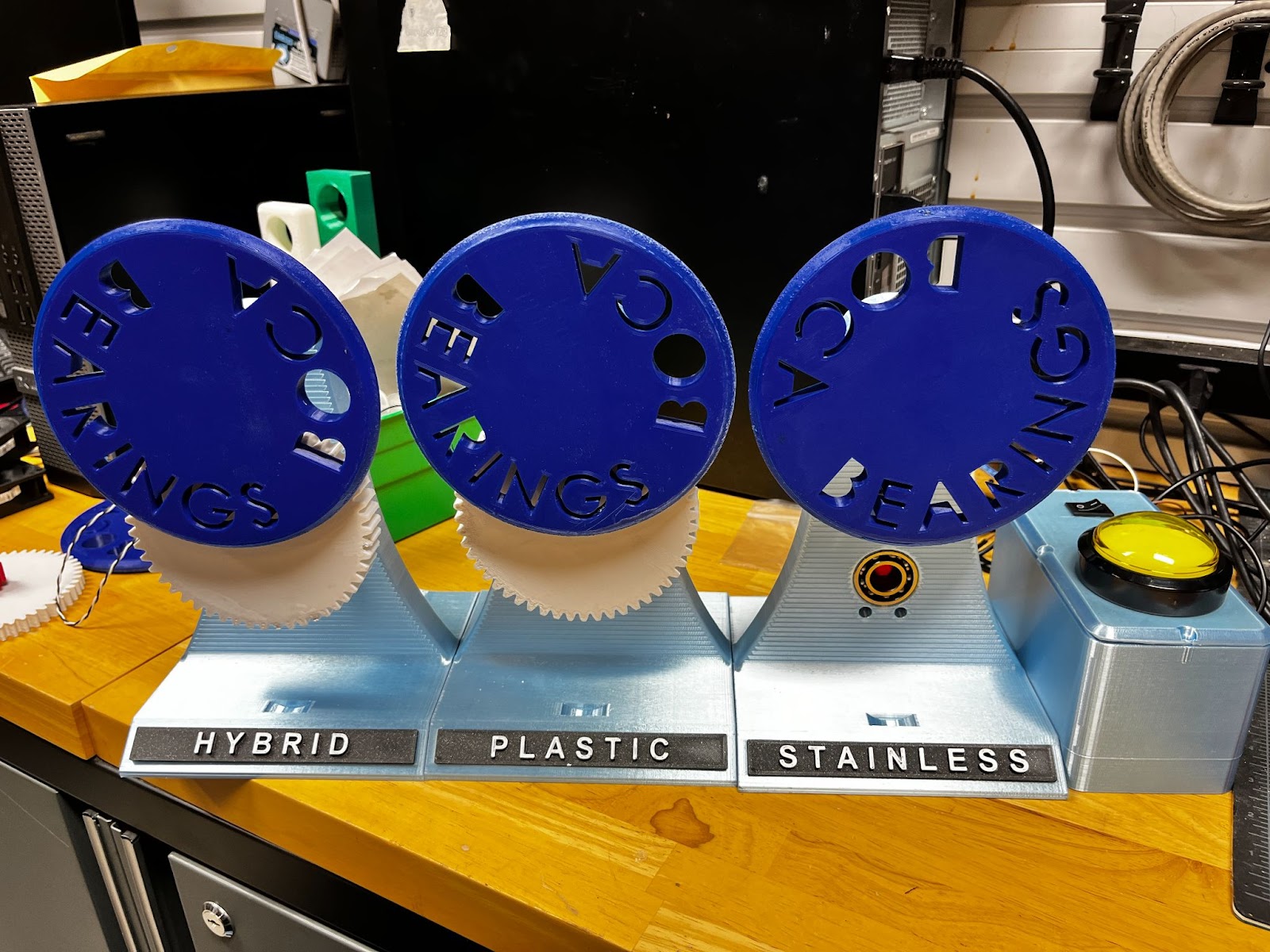