This project is a lesson in the failures that sometimes happen in engineering. I have learned many things in this project, how to weld, how to retrofit parts to an existing system, what conditions resin 3d printed parts, importance of tight tolerances, and how not to build a race mower. So while this project was on every level an important learning experience on my road to becoming an engineer, it is definitely a failure as it stands but we have a plan to change that.

Let’s start with why the system failed; the root of its failure lies in the hydrostatic transaxle. Both Mark and I had never built anything quite like this machine when we started working on it I’ve worked on cars a little and he built the drift trike, so neither of us were completely mechanically inept going into this project. However, neither of us had a lot of experience with shifting power trains and that is where things start to unravel.

We chose a hydrostatic transmission out the gate because all but one of our research sources said that yes if we increased the gearing on one then we would be able to increase the speed, the one source that didn’t support this was a YouTube video that we both wrote off as they just had deteriorated oil and needed to change it which isn’t an uncommon issue for these transaxles. We were also operating under the notion that we would get infinite gearing ratios meaning we would always be in the optimal gear for the RPM of the engine just like a CVT (continuously variable transmission) does, since at its core that is what a hydrostatic transmission is.

Well there is a key difference that was overlooked but in hindsight is the root of our problem a normal CVT uses belts between pulleys that are shifting in diameter to create the proper gear ratio, a hydrostatic transmission on the other hand uses pistons that shift a plate to adjust the gearing ratio. This means that while the CVT is limited by its pulley diameters for ratio at speed the hydrostatic one has fluid mechanic properties at play, and this is where the principal of cavitation rear its ugly head. While in theory you can drive the pistons in a hydrostatic transmission as fast as you want, the reality is that past a certain point those pistons are going to be moving so fast that they aren’t actually moving any fluid because of a cavitation void which is essentially an area where the fluid is being boiled to its gaseous state and then imploding. So if the fluid isn’t moving then there is no transfer of power and without power transfer there is no motion for the lawn mower.

But it gets worse, as I mentioned before we have implosions happening inside a contained environment and a fluid that is simultaneously at a state of high pressure; this means that while the little cavitation bubbles are slowly eating away at the internals we also have an area of high pressure trying to find a path of least resistance, in other words the transaxle has the potential to be a literal time bomb under the right conditions. Now do I believe the failure mode to be one where the whole thing grenades itself, no there is a pressure release valve that is supposed to stop that sort of thing from happening. But it is not outside the realm of possibility that should that valve fail in the right way and the internals fail in the right way there is the potential for some sort of catastrophic failure that could send metal flying, which is why I have my safety concerns. As it stands through we know a 10x gearing increase is on the wrong side of the bell curve of power for the transmission we used.

You might ask yourself, “well that seems like a pretty big thing to overlook how did that slip by?” Well the short answer is I hadn’t taken fluid mechanics up until this semester and while Mark did take it a while back it wasn’t fresh in his mind and the thought never crossed his mind. It was actually in the middle of one of my first fluids mechanics lectures that it dawned on me that this was probably the issue. So it comes down to there are only so many scenarios two guys can come up with as far as problems to consider, this just was one that slipped through the cracks and was unfortunately a death blow to this project. But this is definitely something I will think to consider next time I am working on a project involving transmissions and hydraulics. 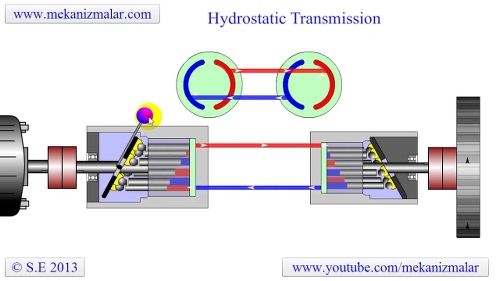 Above you can see a diagram illustrating how both a CVT and hydrostatic transmission work.

Now that the problems are out of the way, let’s talk about what went right. One of the main things that went right was my improvement to welding. Prior to this project I had very limited experience with how to weld or let alone weld well. But as this project progressed I found the key is to have your settings dialed in such a way that you are penetrating and melting together both metal pieces but you aren’t blowing through them and creating holes, because if you are using too little current you may get a weld down but its going to neither be pretty of strong while too much damages your work piece. It’s a bit of a fine dance if you will where power, speed, and feed rate all have to be just right to get the perfect weld. If you look closely your will see the progression from the front axle that is structurally sound but maybe not the cleanest welds ever, to the back hitch where the welds came out almost perfect. Of course the biggest struggle was the thinner gauge sheet-metal we used to cover holes in the body, this was a challenge to keep both the work piece in place and to avoid blowing holes in that thin metal. While there are noticeable pinholes in some of those places that showed up after an acid dip, for the most they were avoided or filled to the best of my ability.

Another thing that went right on this project was the jack shaft and belt system. While the transmission itself is a flo

p, the system that delivers the power to it works really well. There were some issues at the beginning with the belts trying to fly off but after sizing and the proper adjustments to the tensioning systems it works flawlessly. It was amazing that up or down even an eighth of an inch was enough to cause belts to just fly any leave you with no power. Another thing that I learned in that process was you cannot make high speed pulleys on a resin 3d printer, we tried to replace some idler pulleys with them to give us less friction by using ceramic bearings and found that the resin parts have a nasty habit of grenadeing at high speed so we put OEM idlers back on.

This project also taught me a fair bit about drive linkages when we were redoing the steering column. As it turns out if you use the wrong configuration of linkages you can have a system that turns the opposite of what you intended and while it’s somewhat neat it’s not practical at all for this application. This was quickly fixed though and the steering column is a world better than the stock one, there is no pickup it just turns the way you want it to.

Lastly the aesthetics of this build came out great. We decided to go with a Boca Bearing blue as our main color with accents of yellow and teal on the seat to give it just a little pop. This was achieved by a combo of careful spray paint and powder coating of the main frame giving the machine its stunning looks. But unfortunately for this build its looks are currently its best attribute.

Now that I have gone over what went right and what went wrong I would like to take a moment and reflect on what I would have done differently knowing what I know now. Most of what I would have changed involves the drive train, I would not have gone with a machine that used a hydrostatic transmission from the start. I would have gone with something with a mechanical transmission and a solid rear axle from the get go, then we might be able to see numbers north of the 50mph that we intended out of this thing. Granted with mechanical transmissions they have their own issues involving tooth breakage, but that tends to be a sudden and rare thing where as this hydrostatic trans flat out doesn’t work in our application. With this in mind the current plan is to retrofit a new mechanical gear box to the system and bring it to the original vision when this project began. Remember to keep watching for updates as there will be a blog post on that here in the future.