As of Monday, May 16, most of the parts had printed successfully for my gravity powered wind turbine. Pretty much everything is assembled and printed. Only issue I had was the peg on the gear stand broke off again. I tried to super glue it but for some reason it wouldn’t cure so I ended up printing it again with more layers on the inside.

Unfortunately, as I was assembling some of the pieces together to make sure they fit, a peg used for the lever that keeps the “battery”, or vertical gear that stores the energy  in place, broke off. To fix this, I reprinted the base part with the peg using a higher percentage of infill, giving it a stronger internal structure. I am hoping that this will allow me to use a little more force when placing the bearings within the gears and on the pegs.

While inserting some of the bearings into the gears, I noticed that the gears’ inner diameters were slightly larger than the bearings themselves despite the fact the design was made to be compatible with the standard 8x7x22mm bearings. To combat this, I was assisted by one of my fellow interns to use thin tape in order to give the bearings enough extra diameter to fit snugly within the gears.

Through the completion of this project, I had encountered many hiccups that caused me to rethink how I should have my print settings for different types of pieces. For example, the base that holds the rack gears and lever peg  in the middle, I had a few issues with the pegs of the gears breaking off as I was assembling the entire project. To try and combat this, I would go back into the Prusa software to give a greater number of shells on the outer surface of the piece. In other words, I continued to make the inside of the pegs thicker, hoping this would prevent it from breaking off. However, things do not always go as the way you plan and the peg snapped off again. To avoid printing the piece again, I used super glue to reattach the peg which seems to work so far, allowing the gears to spin freely.

Despite these hiccups, I truly believe this project helped me better understand how to troubleshoot when working with 3d printers as well as how to modify parts within CAD softwares, such as SolidWorks and AutoCAD. This project also demonstrates a great concept in renewable energy of producing kinetic energy through converting wind energy to potential energy stored in the rack gear. Now that all parts had been printed, I was able to assemble the full model. Through a bit of sanding and reworking, the model now works as intended with slight variation due to assembly issues. Though not perfect, I am extremely satisfied with how this first project came out and I am excited to start working on my next project with all that I have learned so far! 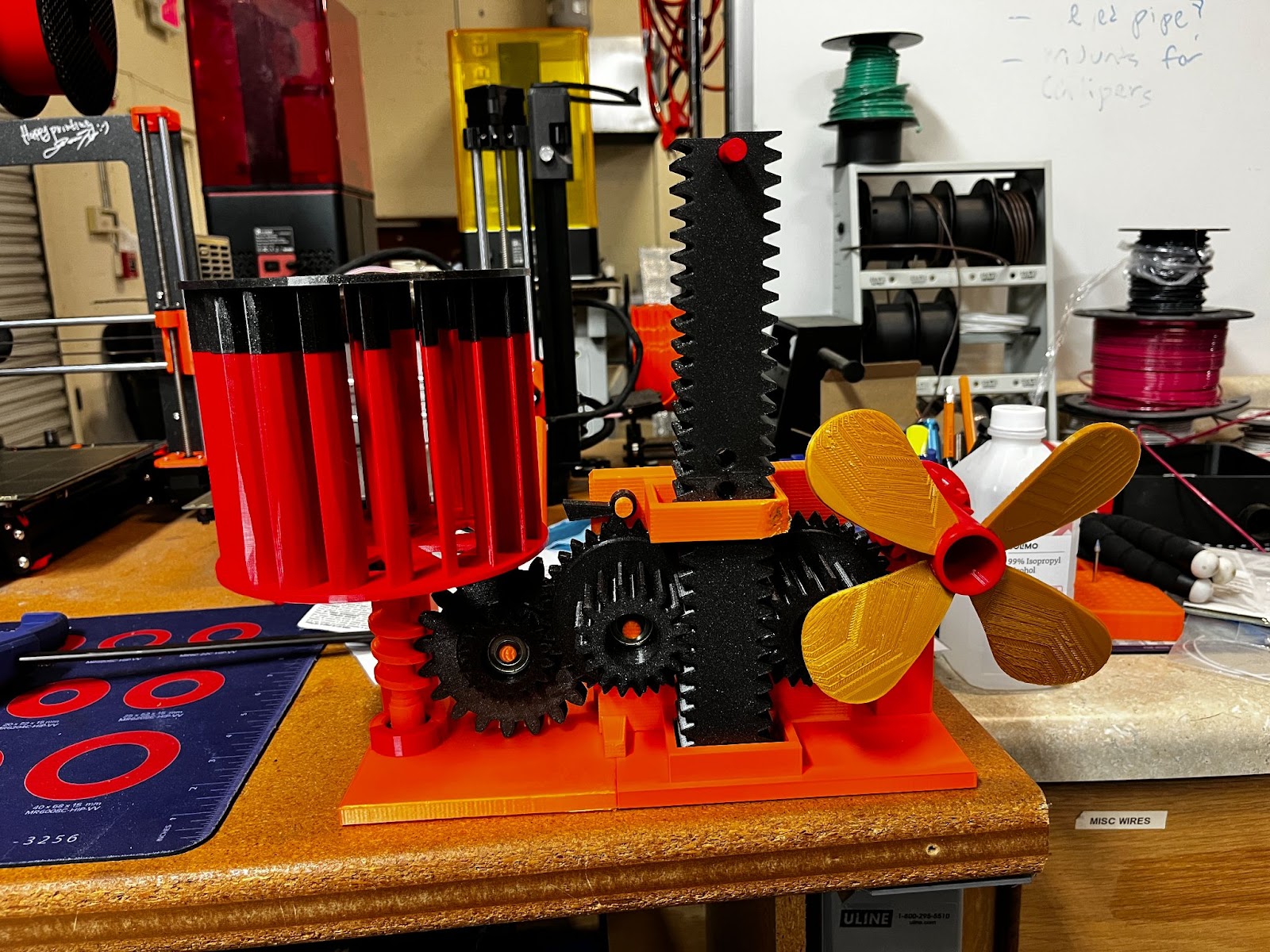