I am excited to announce that the end is finally in site on this project, and this machine has made us work for every inch of progress Mark and I have made on it. If I were to do it all over again are there things I would change, absolutely. But as much as we may want to over engineer and fix this or that there comes a point where we have to draw the line and say this is good enough this is what we are going with. Now there is a fine line between good enough and a dysfunctional product waiting to fail; although it may sound crazy a simple check to see if you're in the good enough range is to ask yourself this short series of questions.

1.Where do you think this machine is going to fail?

2.Is it conceivable someone could abuse or misuse this machine in such a way that it causes it to fail in a dangerous way?

3.If this machine fails is there a realistic possibility that someone will get hurt or that expensive equipment will be destroyed in its failure mode?

4.Would you look at this machine and in good conscience let a loved one use it?

If you answer YES to 2 or 3, or answered NO to 4 then you probably have a machine or project that still needs some revising and it hasn’t reached a state of good enough yet. In the case of this racing mower both Mark and I have had points of contention where one or both of us have said, “No we need to step back and reassess before this fails us”.

Most recently Mark made that call on the brake system of this mower. We had ordered this go cart brake kit, unbeknown to us it was this really weird metric bolt pattern and finding hubs that would fit our axel in the US was next to impossible. While I made an attempt to get the rotor to mount to a hub we had on hand by drilling new holes in the rotor, the thing was still out of true by about 3-5mm. While that may not seem like a lot if your get that mower screaming like we hope to do, that is going to cause some instability so we set about fixing it and ended up stealing the brake system off our old electric go-cart and using that for this project.

As this is more of a handbrake style of braking system I made a bracket out of some salvaged tube steel and mounted it to the right hand side of the frame. Upon installing I found that the original bent tube brake lever was just asking to snap, so using our new drill press I machined a flat on a piece of round steel stock, drilled the mounting holes, and then bent it to shape using the vice and blow torch. 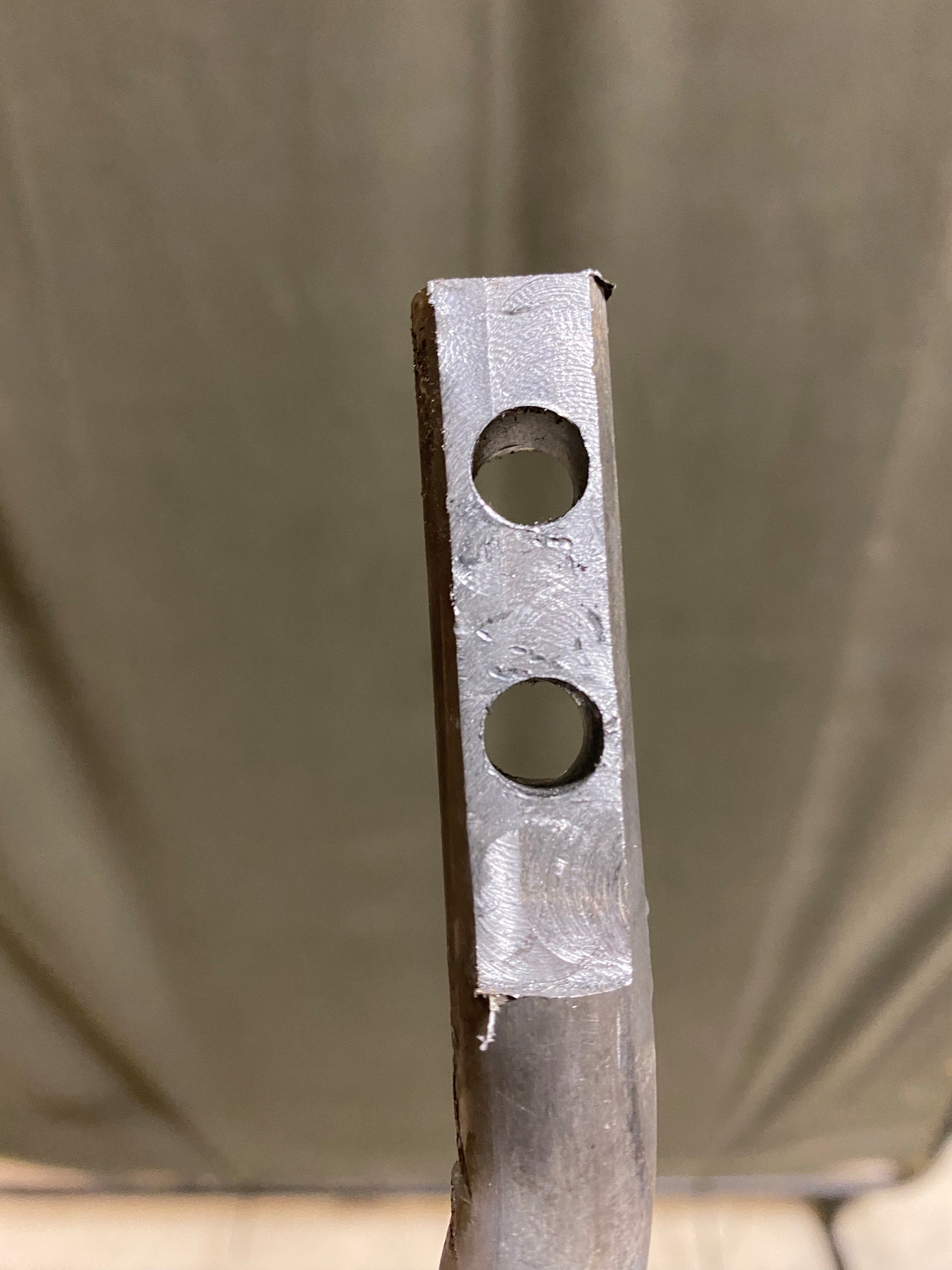 With the immediate issue of  being able to stop taken care of, I set about making sure everything that needed to be hooked up for a test run was hooked up correctly and everything was torqued down correctly. That last part is extremely important and often overlooked step, for certain parts. On this build in particular there have been off and on issues with the transmission mount bowing or flexing under tension, once I looked up the torque spec for an M8 in aluminum I was able to torque all the bolts to the same level and the bowing and uneven flexing issues went away. So if you ever find something in your mechanical project is not quite aligning in one way or another get a torque wrench and see if that makes things happy.

Once the system had been assembled it was time to make sure everything worked in a jack stand test, without the danger of being on a moving vehicle. Thankfully everything worked as expected, aside from a minor leak in the brake cylinder from the plastic fill port that I had accidentally touched the hot brake lever earlier while checking fitment. The leak is not drastic enough to affect the functionality of the brakes, though it will be fixed shortly with a metal bolt of the same size. As for the duct tape on the wheel it is only there to help gauge speed and rotational direction, it is not some attempt at sealing the tire. 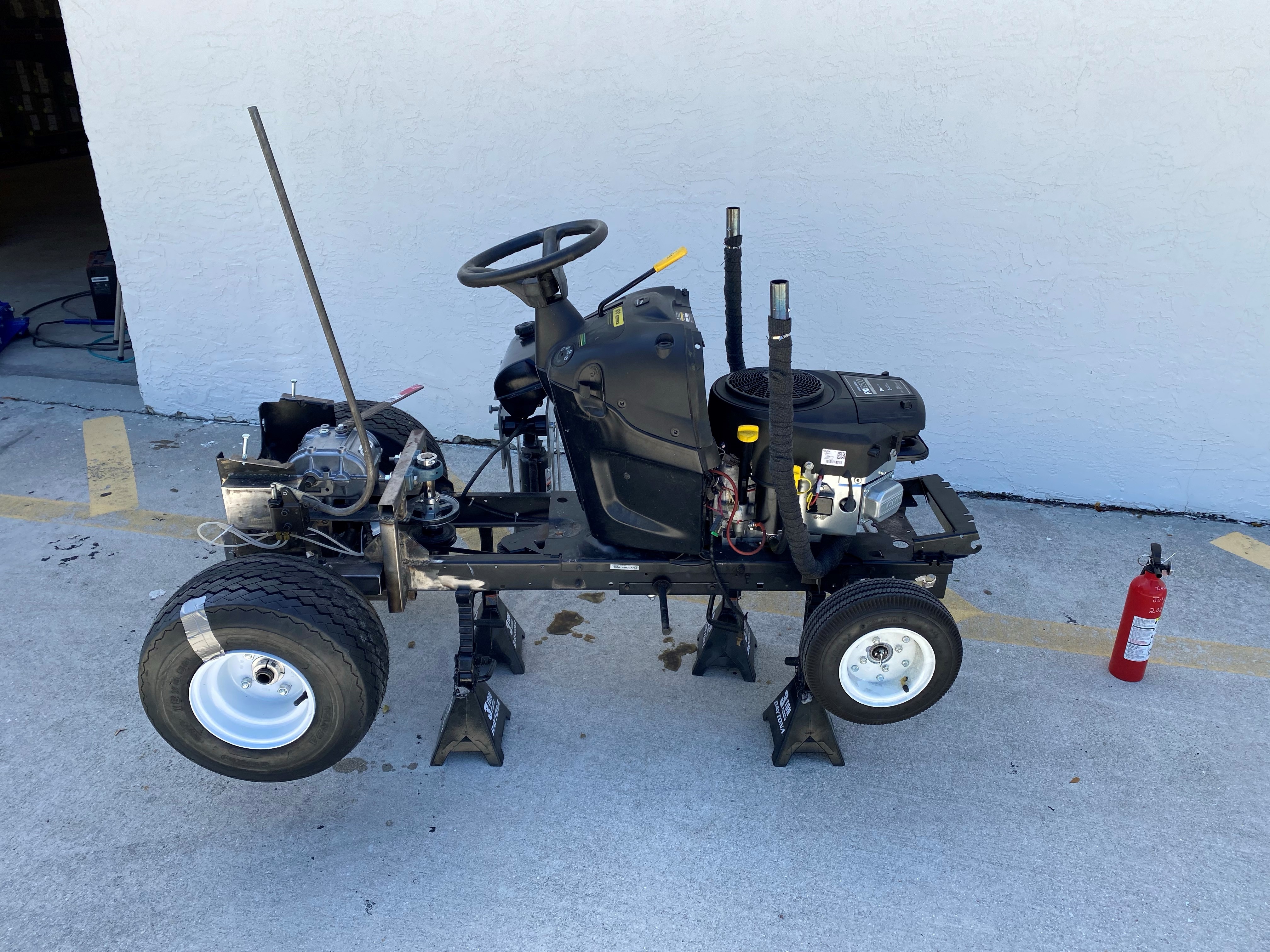