Over the past few weeks, the team at Boca Bearings has been working on revamping the workshop in the warehouse as the space was proving to be difficult to work in due to an inefficient use of space that caused tools to get lost or straight up not have a place. 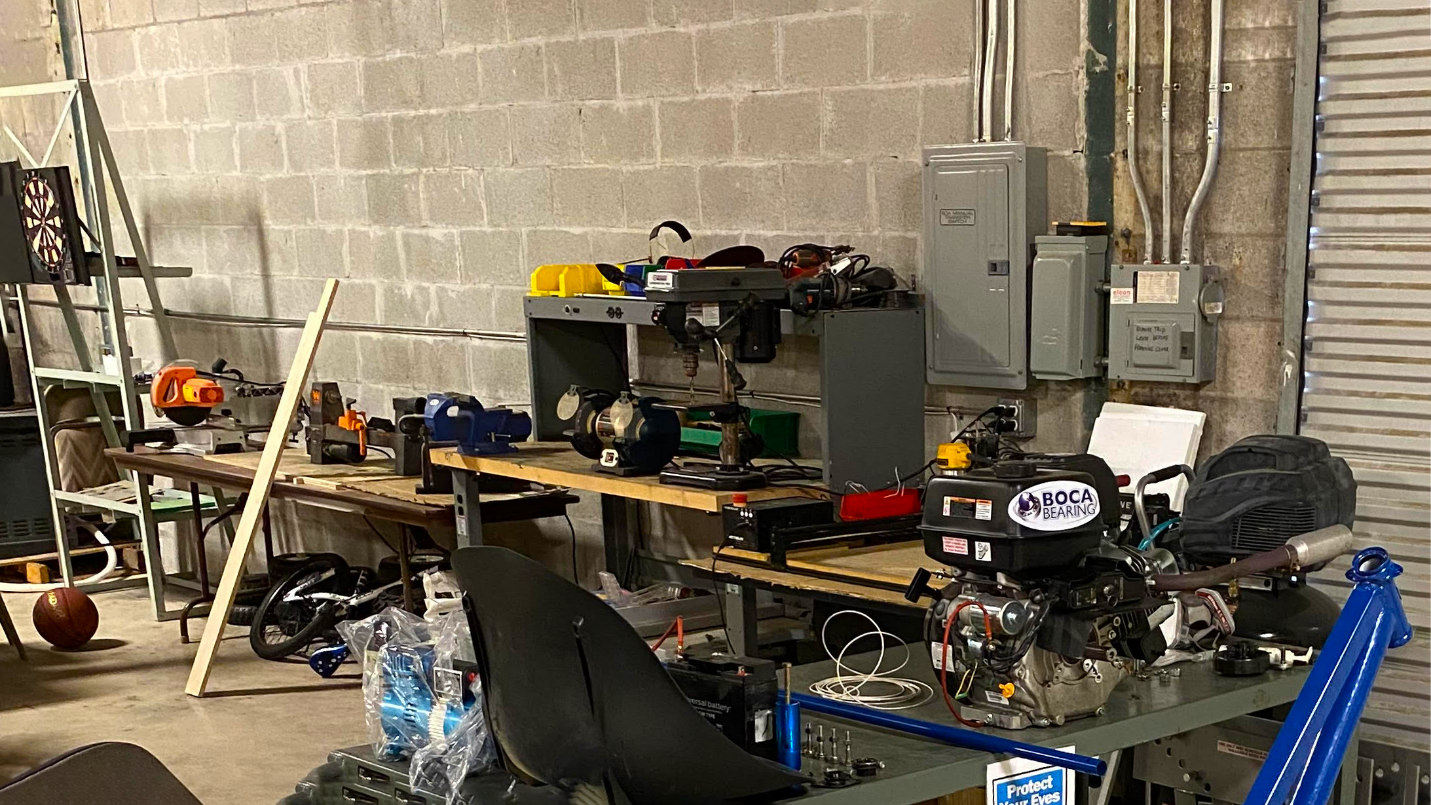 To fix this the decision was made to start from scratch and build a new workspace from the ground-up with a central part to of the workspace being a miter station sandwiched between two 8ft by 40in work benches. This configuration allows for plenty of space to permanently mount commonly used tools like the miter saw, drill press, bench grinder, vice, belt sander, x-carve, and arbor press, while still allowing for plenty of room to do day to day tasks on the workbench. In addition to this the decision was also decided to add a dust collection system and a set of bench top drawers to store every type of standard hardware that may come through the shop. These additions allow for both a reduction in airborne dust that can settle around the warehouse causing both a potential fire hazard and unnecessary contaminants for the bearings we sell, as well as a way to organize all our hardware in a neat and orderly fashion.

To get this project started we first had to build the two workbenches that would be the keystone of everything going into the new workshop. To do this we took two pieces of plywood and ripped them down to 40 in width, as that was the maximum width where we could comfortably reach the far side of the workbench. Next we took some 4x4 posts to make the legs, and cut them down to our desired working height of 36 in. Once that was complete we used some 2x4 boards to connect the legs and make the frame where the plywood top would sit on. Finally we took the plywood tops and installed them using a few wood screws to fasten the corners into the 4x4 and then using finish nails to secure the tops to the 2x4 frame. A final touch that was after the fact was a catch all groove that was made using a round nose router bit and a guide across the front edge of the workbench. This is just something that is used to place little things like screws there so while you're working they don't just roll off the workbench.

Once that was taken care of the next step was to add the miter station. There was a little trial and error here due to small things that caused problems such as screws that were about ½ an inch too short and forgetting to take into account the width of the plywood. In the end we ended up cutting a piece of plywood to the width of our table saw when it was in storage, this way we could make use of the area under the miter saw station. Then we screwed that into the 2x4 support brackets and reinforced it with more 2x4 spanning the width of the station. All this made it so that the miter saw sat flush with the work benches and made for a sturdy work surface.

Once that was completed we were able to make use of our new workstation by starting to build the hardware storage drawers. To do this we cut seven sections of plywood into 16in wide strips to make the ribs for the drawer sections. A dado was then used to cut slots for the shelves that the drawers would sit on. These ribs were then attached to a top and bottom piece of plywood as seem in the picture below. 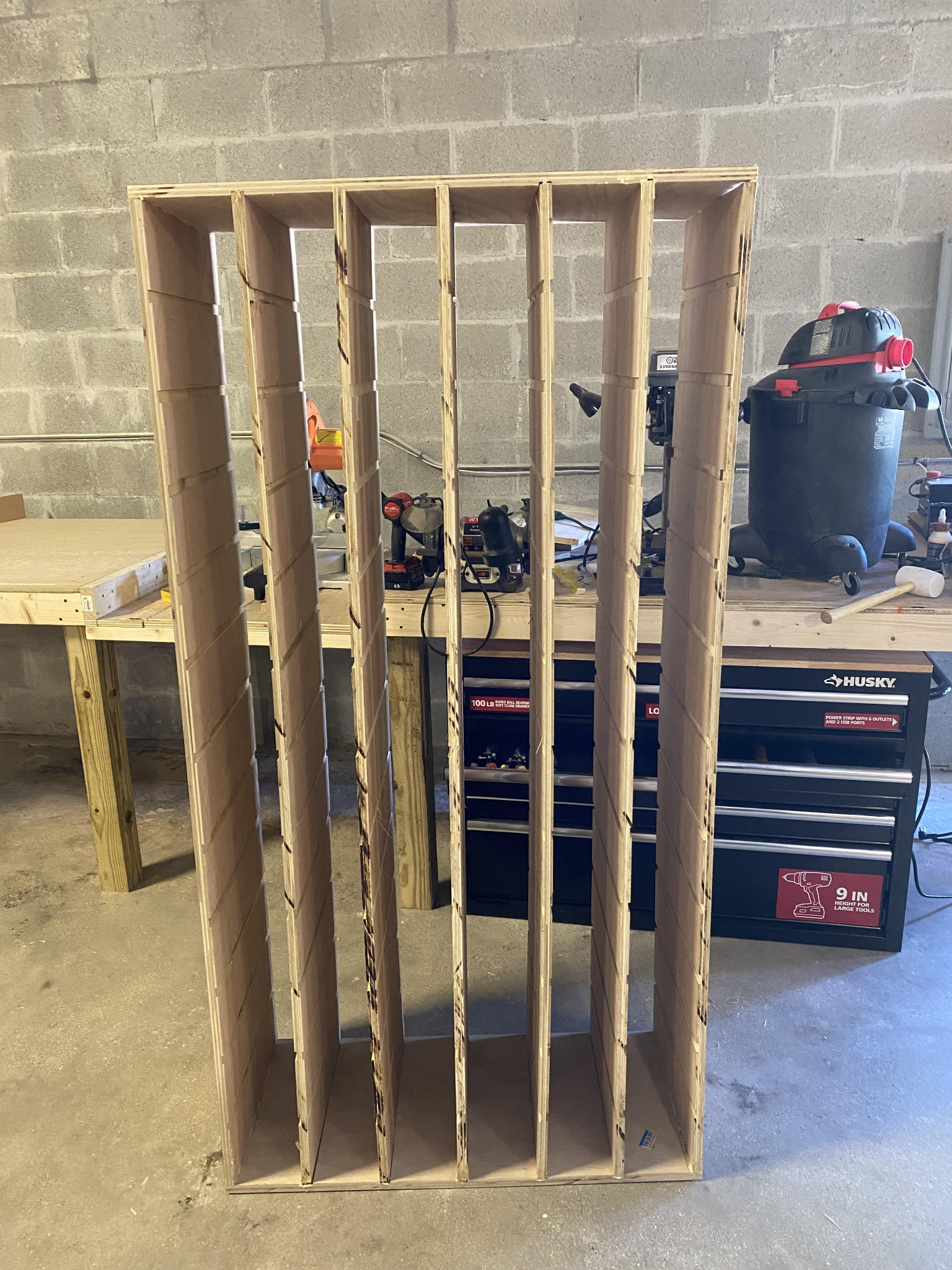 A plywood sheet was then cut to size and put on as backing to keep the drawers from being pushed out the back and to give a little more structural rigidity to them. As we used oak for this due to the lumber shortage, the frame was very heavy and we had to use a forklift to lift it the 3ft to get it on top of the workbench. Once it was on the workbench 2x4 were added to the underside of the workbench to give something for the securing screws to bite into. If these were not added there would have been a serious risk of the screws ripping out and the entire structure falling over, which at best would ruin hundreds of dollars-worth of material, and at worst injure or kill someone. This is why it is crucial to always over build and over secure when in doubt.

Once the frame was secure we could now make and install the little shelves that would make up the drawer cubbies. These were made by ripping pieces of 3/4in ply to width and using a jig with the miter saw station to set the length. By using a jig this allowed us to measure once and cut the many shelves necessary in quick succession. The shelves then had a bead of wood glue placed on each side and were hammered into the frame with a mallet.

After all the shelves were in it was time for the drawers. To save money we used ⅝ MDF for the drawers and the scraps of 3/4in plywood for the face plates. These were made in an assembly line fashion where one person would spread wood glue and then pass it off to the next person to pin it with finish nails and clean up the excess glue. Once all the glue had dried we then placed the handles on the front of the drawers and the drawers were installed in their cubbies. To label them we used foil tape and a sharpie, making a drawer for every ANSI size of fastener that we use so whenever we have an extra bolt left over we know exactly where it goes. Below is an image of the finished product. 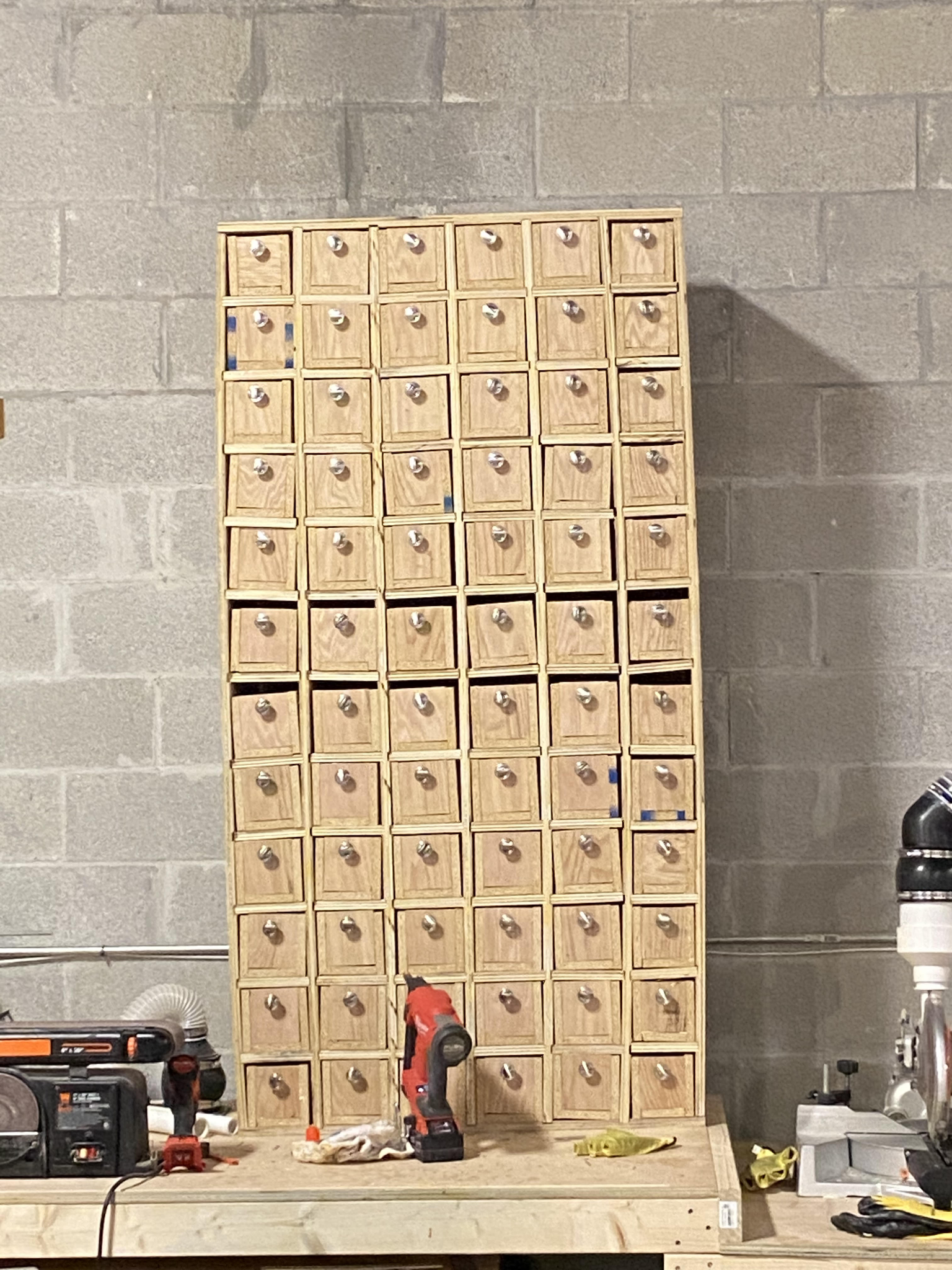 After the drawers were installed the last thing to do was finish installing the dust collection system. The core part of this system is the dust collection unit itself, for this we went with a 1 HP unit by Delta as it was the most powerful and best reviewed unit that still used a standard 15 amp plug. This unit can be found here: https://www.homedepot.com/p/Delta-1-HP-Induction-Motor-750-CFM-Dust-Collection-System-50-723-T2/302270622#overlay . Once we had that taken care of we went about Plumbing the vacuum lines under the workbench. For this we decided to give a vacuum port for every major tool we had, and since that worked out to 5 ports with the addition of the sweep port we had to use gate valves so as to not lose significant amounts of suction. This way we can open the suction for the tools we are using and close off the suction on the rest of the tools for optimal efficiency. 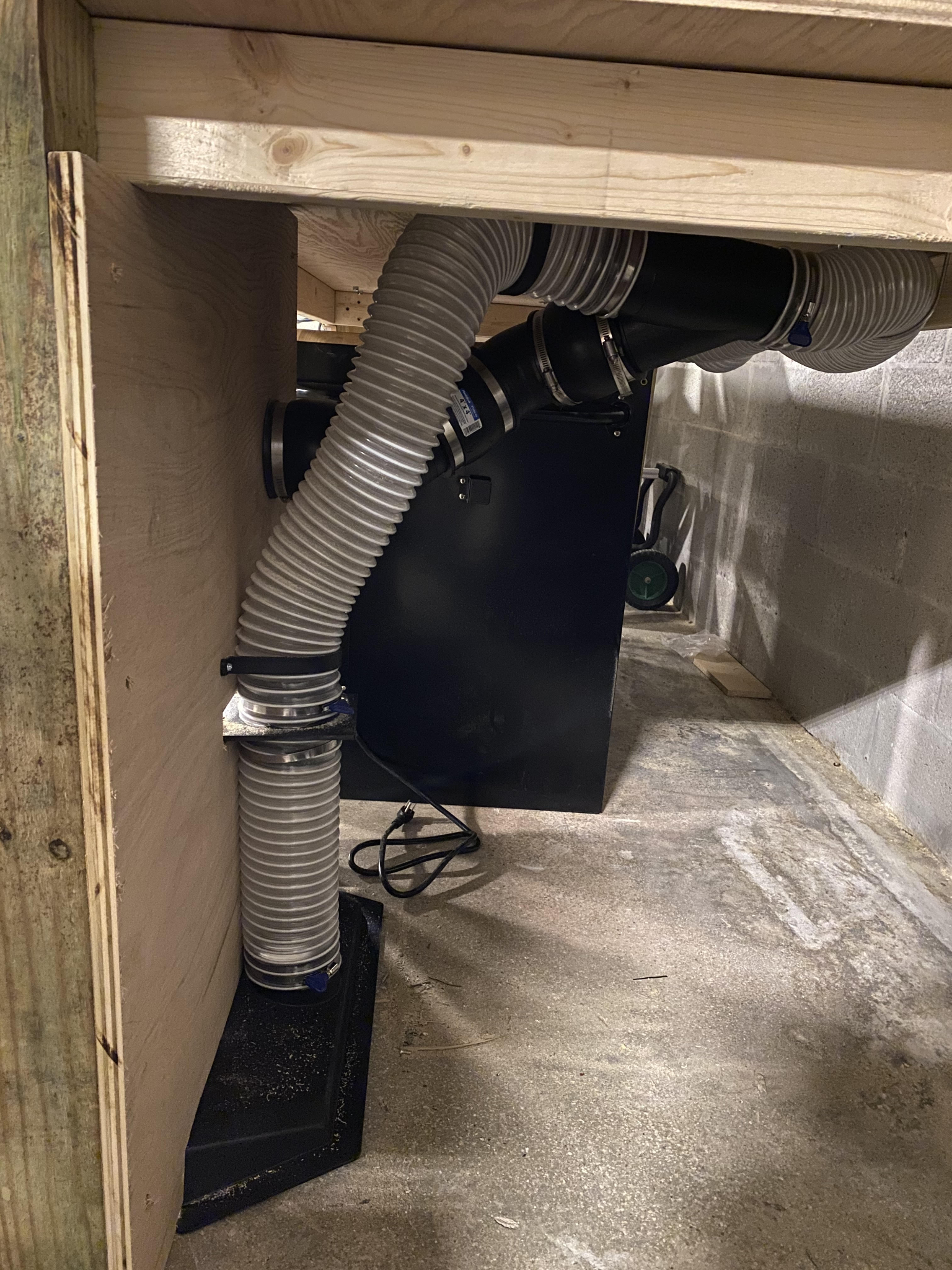 With the completion of this system this means that the new workshop is complete and ready to be used for our upcoming projects. Stay tuned for more exciting projects from the team here at Boca Bearings!