After maker fair 2021 the pinball machine was feeling a little rough, two days of kids smashing buttons nonstop meant parts broke, coils started getting over heated from the excessive use, and relays failed. By the end of the even the machine was still functional but 3 relays died, the main launching system was getting weak from the coil not having enough cool down time, and a handful of 3d printed playfield pieces broke. In some ways it was a victim of its own success, there was hardly a minute that there wasn’t someone playing on it and more often than not there was a line of little kids waiting to play with it. With a better understanding of how the machine would hold up in the real world some upgrades and updates were in order.

First, the rats nest of wiring had to go, it was one of those things where it shouldn’t have happened in the first place but did for reasons I now forget. So all the plugs were disconnected and the mess of wires was pulled out and stuck in a cardboard box for later use where they will be properly trimmed and cable managed.

Second, the system needed cooling which in this case means adding some intake fans to just get the air moving around. While I had initial assumed natural convection would be enough to cool this machine what I had not accounted for was the box itself acting like a thermal insulator. The mess of wires didn’t help smooth air flow either.

For the fans I went with 4 120mm Noctua NF-P12 1700rpm fans. While cheaper fans could have been used these were chosen because Noctua makes some of the quietest and most reliable fans on the market in my experience. With this being something people will continuously be interacting with those two items were of top priority. To install these an oscillating tool was used to cut out the square holes for the mounting brackets, leaving the machine looking like it always had fans. For powering the fans a buck converter was used to step down the voltage from 24v to 5v for the fans leaving them running at a constant RPM while the machine is powered on.

Third, the system needed new relays. While the cheap mechanical relay banks would be fine for something casually being used in a game room, they aren’t ideal for something that is going to be hammered on by little kids for days on end. The solution to this is to convert the whole system over to solid state relays that should have a life span of about 100x longer than its mechanical counter part due to them having no moving parts. The disadvantage is that they cost significantly more than the relays we were using before as the previous relays were about $1.50 each while these are about $13 each. Though given that these should make the machine significantly more reliable it is a worth while upgrade.

Lastly the system needed the new wiring run. To do this the relays were split where half of them where put on the play fails and the other half were mounted to the box, dependent on where the actuation switch is located. By using a 6 pin plug we had in the workshop I was able to change it from where there were previously dozens of plug connections, where as now there are just two plug connections going to the board.

Bellow you can see a before and after of the wiring of the pinball machine and I would call it a massive improvement. There are still some mechanical improvements to be made on the play field but this upgrade to the electrical system was definitely a step in the right direction.  Be sure to come see us at the Orlando MakerFair 2022 where you can come try it for yourself! 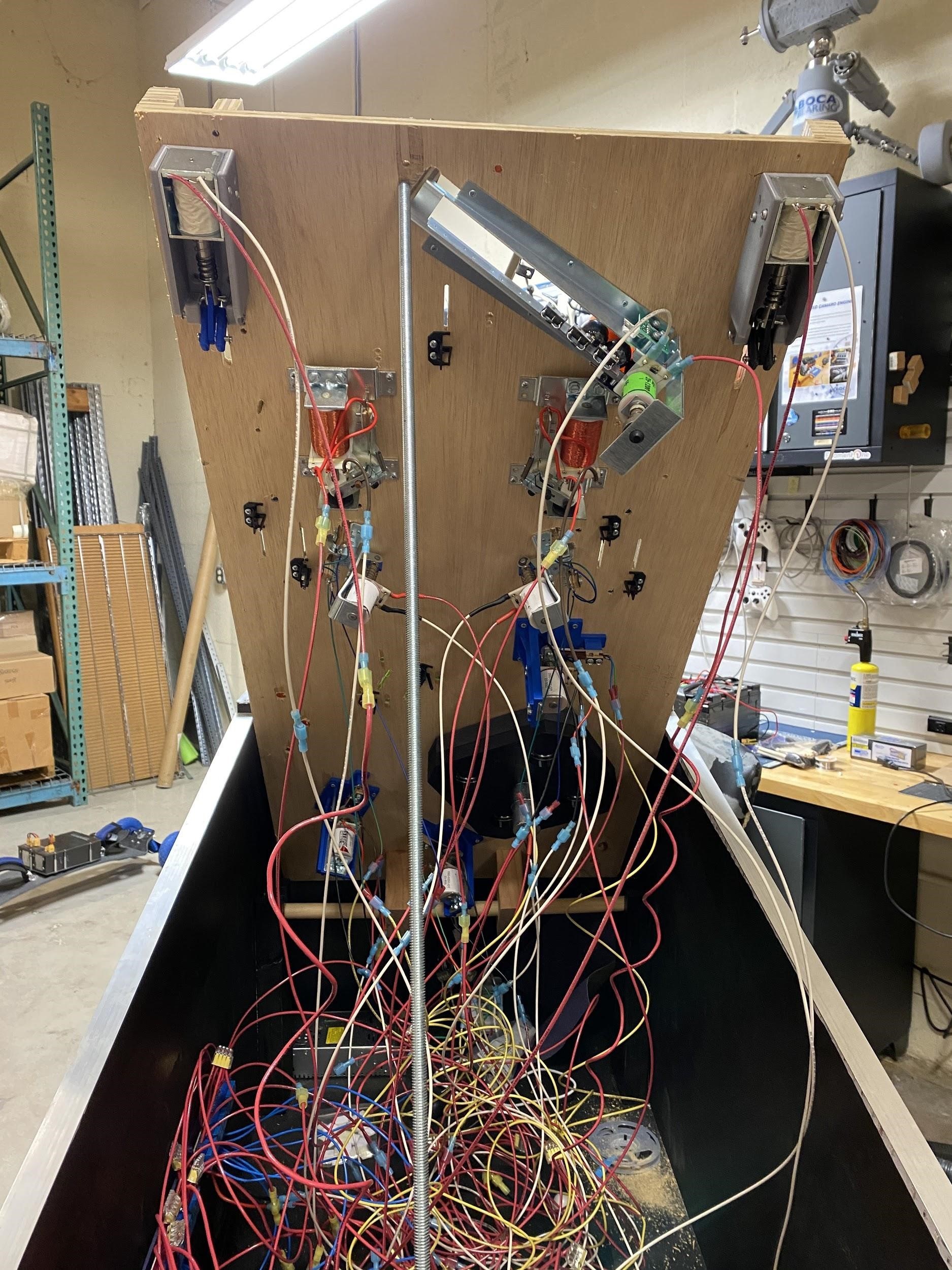 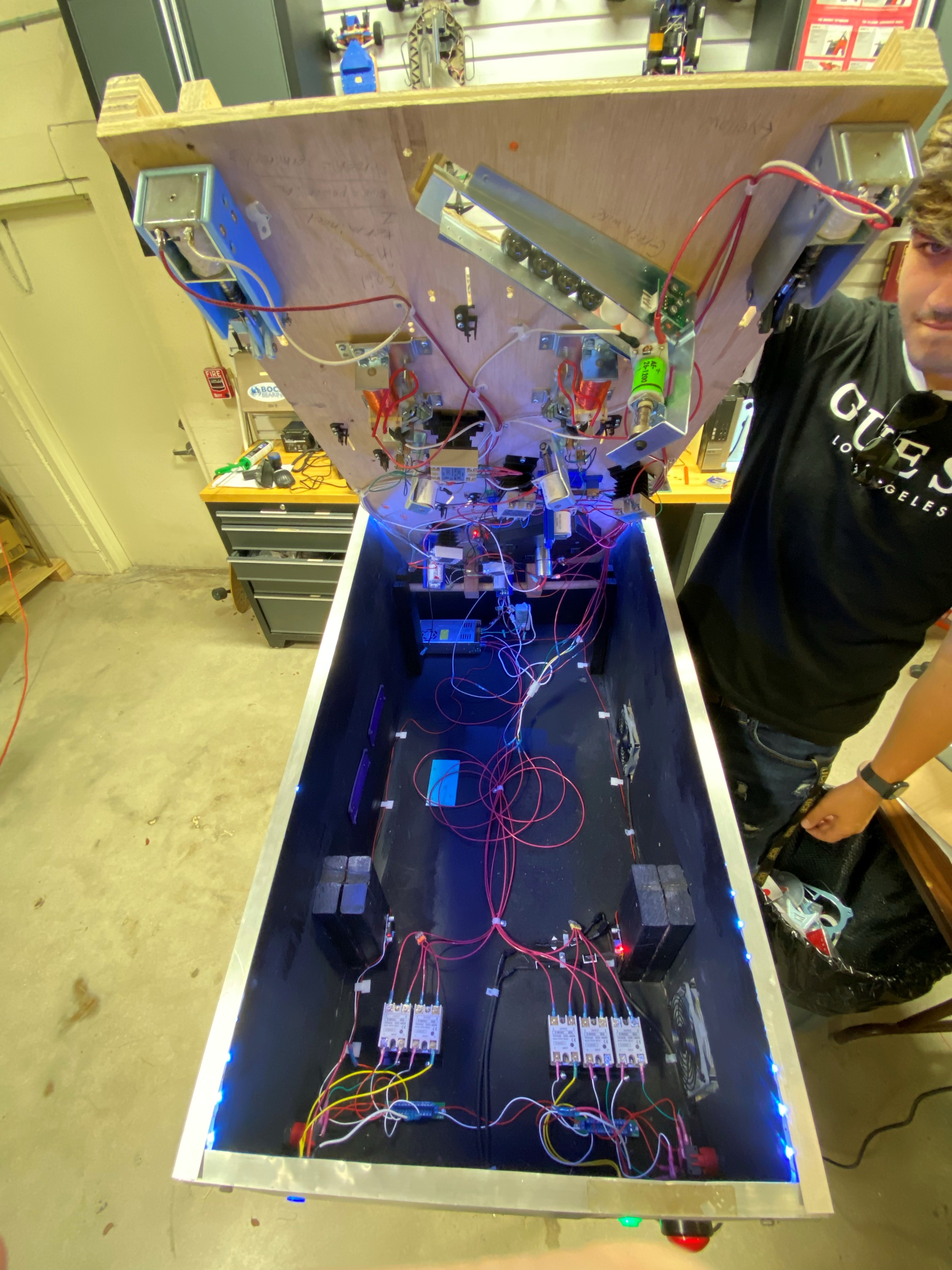